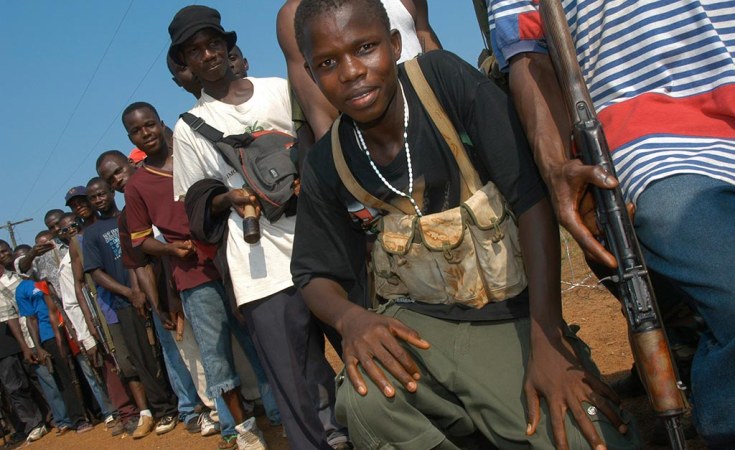 H. Caux/UNHCR
As part of the Disarmament, Demobilization, Rehabilitation and Reintegration (DDRR) process, former rebels in Liberia wait to exchange their weapons for cash. They will also attend training for reinsertion into civilian life.
FrontPageAfrica (Monrovia)
By Henry Karmo

Monrovia — Plenary of the Liberian Senate on Thursday debated a report submitted by its leadership on its advice to President George Weah on the Truth and Reconciliation Commission (TRC).

The floor of the Senate was met with mixed views about whether to flow with the leadership's recommendation or follow the popular call from people outside the legislature who are calling for the establishment of a war and economic crimes court.

Senators Edwin Snowe of Bomi County, Milton Teahjay of sinoe County, Jeremiah Koung of Nimba County were amongst senators who believe setting up a Transitional Justice Commission is the best way forward while others including Willington Geevon Smith of river-Cess County and Dr. Henrique Tokpah of Bong County, and Steve Zargo of lofa County are in support of the establishment of the court with concerns about timing and funding

At one point, Senator Johnathan Sogboie of River Gee County, expressed serious concern about the credibility of the Senate Leadership's report that also carried the signature of Senator Prince Johnson of Nimba County who is a major player of the civil war and a major character in the TRC Report.

He believes the sentiment against the leadership report is the way it is because of people like Sen. Johnson's signature should not be on a report that involves.

In response to this argument, Senator Teahjay said, by virtue of Senator Johnson's position on the leadership, he is qualified to sign the report.

"If we don't want him sign this report let's remove him from leadership," Sen. Teahjay said.

The Liberian Senate in its report advised President George Weah to set up a Transitional Justice Commission that would analyze and investigate the findings of the final report of the Truth and Reconciliation Commission (TRC) amid diverse public opinion on whether or not to implement the recommendations of the report and the establishment of war and economic crimes court.

In the past few years, and sine the sitting of the 54th Legislature and inauguration of President George Weah, there have been debates on how to proceed with the implementation of the TRC Report. One group has been calling for the establishment of a war and economic crimes court to prosecute those who committed heinous crimes during the civil crisis while on the other hand, another group of Liberians are calling for a palava hut mechanism through which the perpetrators and victims will be brought face-to-face.

What Are the Senator Saying?

"I am concern about the issue of justice; we understand the situation we experienced as a country. I am of the opinion that the people want justice to prevail. Notwithstanding, there are issues we need to look at and that is to take this report to the public for expert opinion

"I am concern and agree with the report that the issues of economic crimes be handled by our jurisprudent. On the war crimes, we have options which include the International Criminal court. We strongly believe that the ICC is the option we will use."

"The report is good but it wouldn't be seen as creditable."

"Until we remove Senator Johnson from the leadership, he is still a leader and as a leader, he has an obligation to us to sign document produced by the leadership. We believe the international community is not making false allegation. I support the international community to come to Liberia with evidences they have gathered and takeaway those who have committed the crimes. Just as they did it in Ivory Coast. They took away Gbagbo without establishing a court.

"I support the establishment of a war crimes court but we don't have the money. This country don't have a budget. I appeal that we identify a parcel of land and give it to the International community to come and construct a court and try whoever they want.

"My problem with Senator Johnson is he is not the only person who fought war, so let him stop getting upset by the mention of war crime court."

"Besides being a Senator representing River-Cess, I represent thousands of sons and daughters who are victims of this war. I'm hundred percent in support any effort aimed at ending impunity in our country, especially when the perpetrators are not showing remorse.

"I support the establishment of a war crimes court 100% and if there is anything more than that I stand for it. Despite this position, I have few concerns which includes jurisdiction. Who will be the judges? will the jurisdiction of the court be above the Supreme Court? Under which law those will people be indicted and tried?

"We have to do a critical analysis of the cause of this exercise. I disagree with the call for reparation trust fund. If we don't have money to establish a court where will we get money from for the trust fund?"

"I support the setting up of the court but we should approach it very carefully. I am concern about the trauma suffered by those who experienced the war. The war crime court issue, I am in favor of it but I think as the leadership committee recommended, it needs to be looked at. We have huge percentage of our current population who were not around and want it. They need to be informed and educated about what happened.

"In my opinion, I support it but we should approach it very carefully and meticulously by inviting another group of experts who will look at it holistically."

"Is Nimba County against war crimes court? No. We support the establishment of the war and economic crimes court but there are too many cross-cutting issues. If the court is established, will people be allowed to take appeal to the Supreme Court?

Under our law, if someone kills they should be killed but because we signed up to international convention we are not killing people.

"We need to be careful and not act on the basis of emotions. I think the establishment of the Commission is good. I support the setting up of a Transitional Justice Commission. We are not in hurry we had the opportunity to establish this court since 2006 when we had international security here to arrest these warlords.

"The current call for a war crimes court is political justice."

"If we move this country based on sentiments and political interests, we will not move this country forward. I was on sanction for 10 years because I was married to the daughter of former President Charles Taylor and I never met my accusers. I want to state before I leave that I fully support the document from the leadership decision for transitional justice."

"Lofa County supports war crimes court but, in our opinion, it is not appropriate now. We should not proceed under pressure. As we make these decisions, let's look at the security of this country. We have drag this TRC for too long and the President is right to ask for our opinion. People need to be honest, by confessing, reaching out to people they have offended and say sorry sincerely.

"We need to stop getting agitated especially, those accused. We may not replicate what happened in other countries; we are unique people but must be remorseful."

"If the question is whether there should be war crimes court? The Peace Agreement didn't call for excluding war crimes court even five hundred years from now. Nobody should hide behind amnesty. Since war crimes court was not exclude; if people say they want it I am not in the position to resist their position.

"If we are taking this decision it should be advice by our decision to support it financially."

"During the "Civil WAR", we sought PEACE. The first step to seeking PEACE was to secure a "CEASE-FIRE". After "CEASE-FIRE", and as the means of sustaining the PEACE we all desire, there MUST be JUSTICE. The War and Economic Crimes Court is the ONLY way out to sustaining the PEACE. This is why I firmly support establishment of a War and Economic Crimes Court for Liberia to ensure justice and accountability so as to bring an end to the culture of IMPUNITY. Absolutely, no other way around it!!"