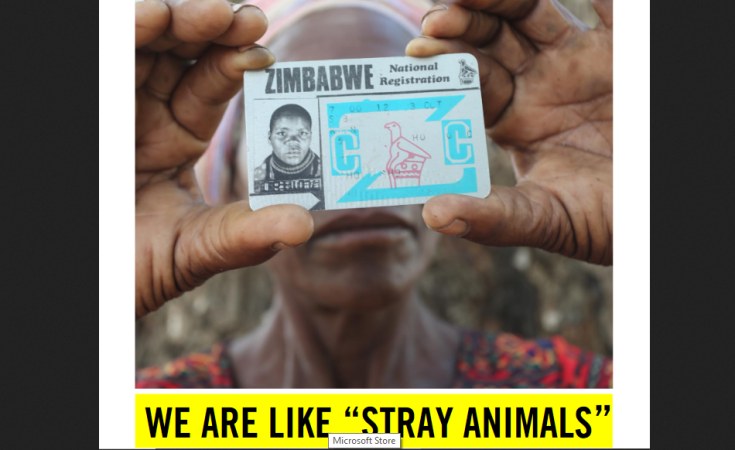 A government move to issue national identity documents over the weekend to pupils that are set to write public examinations in November went up in smoke yesterday after registry offices across the country were overwhelmed by demand.

Thousands of Zimbabweans have been struggling to access identity and other documents, including national IDs, in recent months due to a shortage of production consumables.

The government last week said it had since acquired the consumables and set aside this weekend to issue IDs to those sitting for 'O' and 'A' Level examinations in November.

Poor organisation and the high demand for the documents, however, saw multitudes descending on registry offices across the country.

Chaotic scenes were witnessed at Harare's two registration centres, as well as in Bulawayo, Chinhoyi, Mutare, Gweru, Masvingo and Chinhoyi, among other areas across Zimbabwe.

Police had to be roped in to disperse the agitated pupils, many of whom were complaining of hunger and fatigue after standing in queues for a long time.

Some of them had hired kombis to go in groups and get the IDs, only to be turned away empty-handed.

The stampede fuelled the endemic corrupt activities at the RG's offices, with some pupils reporting that they were made to pay US$20 to US$30 to jump the queue in Harare.

In Bulawayo, the pupils that thronged Msitheli and Tredgold to acquire IDs complained that the process was too slow.

"It's saddening that many of us returned home without the IDs," said one pupil.

"I woke up early and I was in town with my other classmates only to find Tredgold already packed.

"I even lost hope the time I stepped there because the place was full of students who had came earlier than us, I was here by 6am.

"But only 100 people had their documents processed and we were told the rest would have to book for another day."

In Mutare, some pupils' complained of hunger, with others expressing frustration that they were being turned away after using their money to hire a kombi.

The chaos forced the government to suspend the scheme later in the day.

"The programme was meant for 'O' and 'A" Level students, who want to register for their exams only," Home Affairs minister Kazembe Kazembe told The Standard.

"It turned out that all youths, who need IDs came, even some who are not even in school.

"This becomes a problem with this Covid-19 pandemic, hence the programme will be called off in view of the risks involved."

He said alternative rollout arrangements would be made to ensure that the students, who have to register for exams would not be inconvenienced.

At the Market Square registry offices in Harare, the pupils claimed only 80 were allowed in with the rest being told to come today.

There was commotion when word started filtering in that some had paid bribes.

At the Chinhoyi registry offices the students were told that the machine that is used to take ID pictures broke down in January.

The students were told to go to the Murombedzi office, the next nearest centre.

The Primary and Secondary Education ministry was blamed for contributing to the confusion after failing to communicate that only external/private candidates were required to produce IDs when registering for public exams.

"The school or centre must be able to verify the identity of the candidate."