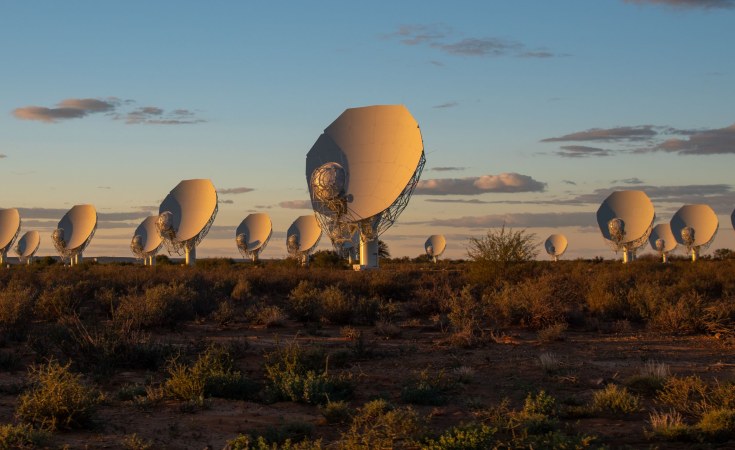 SARAO
Some of the 64 radio antennas of the MeerKAT telescope in the Karoo, 90km outside Carnarvon (file photo).
Daily Maverick (Johannesburg)
analysis By Elsabé Brits

As the best scientific instrument of its kind in the world, the MeerKAT radio telescope in the Karoo is making discoveries that no other telescope can make - even in a galaxy as well studied as the IC 4296.

The MeerKAT radio telescope, located in Northern Cape, has produced a remarkable image showing a combination of cosmic features never before seen, revealing unexpected details of the inner workings of enormous radio galaxies.

These striking features - cosmic "threads, ribbons and rings" - are much larger than our own Milky Way.

At the centre of the giant elliptical galaxy called IC 4296 is a rotating black hole with a mass of a billion suns. Energy released by matter falling onto the black hole generates two opposing radio jets containing magnetic fields and relativistic electrons.

After travelling through intergalactic space at the speed of light for 160 million years, these radio waves were detected by the South African Radio Astronomy Observatory's (Sarao's) MeerKAT telescope, which is in the Karoo region of Northern Cape.

The bright spines of the initially straight jets become unstable just outside the galaxy, where some of the electrons escape...