Zimbabwe: 'Govt Has Killed Us' - Harare Traders As Demolitions Continue 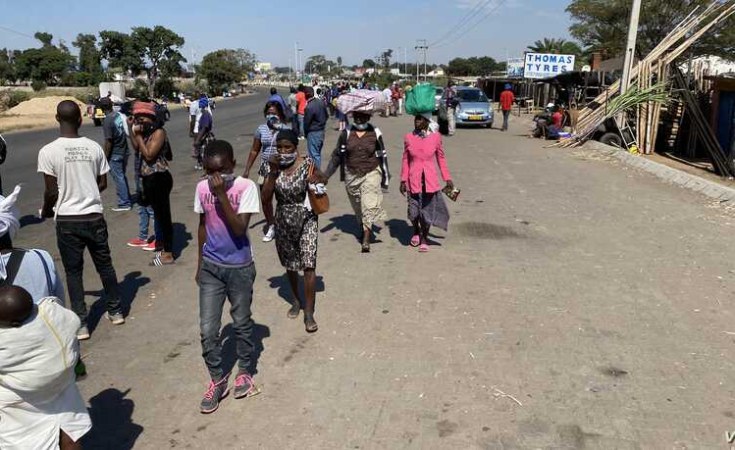 Columbus Mavhunga/VOA
It was back to normal in Harare, Zimbabwe, for most informal traders despite a lockdown called by the government last month to contain the spread of the coronavirus, May 15, 2020.
New Zimbabwe (London)
By Thandiwe Garusa

INFORMAL traders at Tichagarika shopping centre and Glen View 8 home industries complex in Harare have equated the government's decision Tuesday to demolish their market stalls to death sentences as vending was their only source of survival.

On Monday, senior Zanu PF officials ordered for all demolitions of businesses and houses to stop as they were "insensitive and human".

However, the residents of Glen View, a high-density suburb, were stunned when heavily armed police and Harare City Council officers descended in the area Tuesday morning, and started pulling down market stalls and other informal trading points.

A similar exercise was carried out in Mbare also in Harare while houses were demolished in Melfort, Goromonzi, Mashonaland East province last week.

The exercise continued Tuesday in Glen View with police failing to control thousands of shocked residents who defied Covid-19 lockdown restrictions to witness the demolitions.

Most of the demolitions were targeted at furniture makers, gas filling, and tuck-shop operators at the Glen View 8 complex, and shopping centres.

Most of the traders castigated the government describing it as "ruthless" as it did not care about the welfare of the citizens.

"We do not have good administration in this country. If we had a government which was sympathetic with the people, it could have at least provided an alternative source of income for us because you cannot destroy people's livelihoods without an option.

"People have been suffering for a long time. They just want to live, we do not want this kind of system," another affected informal trader said.

The residents also threatened to revolt against the government if it continued with the demolitions.

"People are going to react soon if this continues. The authorities are mismanaging the country's resources. Since the start of the Covid-19 pandemic last year, no-one has been assisted.

"They promised to provide us with food aid, but up to now nothing has come our way. We cannot afford even a face mask to protect ourselves from Covid-19. People now need an immediate end and a solution to their suffering."

However, Local Government Minister July Moyo defended the on-going demolitions in Harare saying the authorities cannot continue looking at the "chaos in our cities".

"Government is saying we cannot continue to just look at chaos in our cities if we want investment to come; if we want to reach vision 2030," he said.

"We were clearing the road to allow the easy movement of vehicles and to reduce congestion at the busy market place. Where people have been given notices, they should do the honourable and move off on their own," he said.