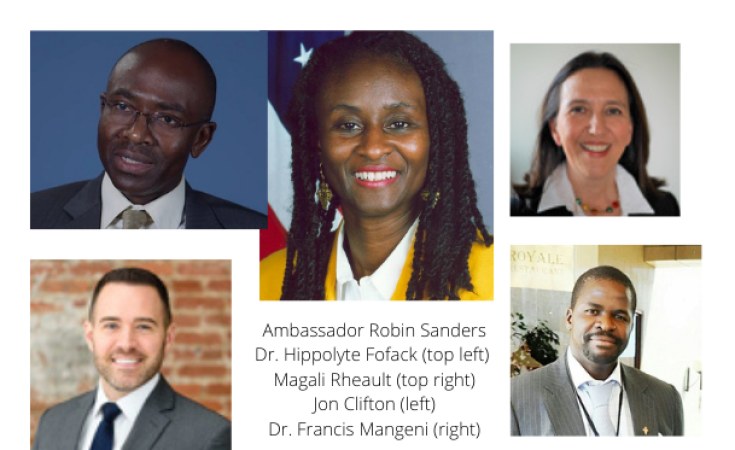 This is an opportunity to hear firsthand from the event's honored featured speakers: Dr. Hippolyte Fofack of the African Export-Import Bank (Afreximbank) and Dr. Francis Mangeni, advisor to the Secretary General of the Africa Continental Free Trade Area (AfCFTA). Each will discuss how their institutions support the critical role Africa and the Africa diaspora's small- and medium-size enterprises (SMEs) serve in the region's economy and the broader success of the AfCFTA. Gallup's leading Africa research director, Magali Rheault, will scene set with relevant polling data on the current business environment for Africa SMEs and regional economies.

SPEAKERS
Ambassador Robin Sanders
CEO of FEEEDS
Ambassador (Dr.) Robin Renee Sanders served as one of the U.S. Government's top diplomats on African issues over a long career in the United States Diplomatic Corps reaching senior positions ranging from Ambassador to the Republics of Nigeria, Republic of Congo, two stints – NSC Director for Africa at the White House, and U.S. Permanent Representative to the West African Regional Organization ECOWAS. Dr. Sanders received her doctor of science degree from Pittsburgh's Robert Morris University, where she also holds the title of Distinguished Public Service & Rooney Scholar; has MA and MS degrees from Ohio University; and, a BA from Hampton University. She is a recognized thought-leader on Africa's political, economic, technology, security (e.g. Boko Haram, Al Shababb) and policy issues, as well as on region's thematic topics such as SDGs, food security, democracy/elections, education & climate change. She has testified before the U.S. Congress on these topics. Her advisory firm is divided into two parts: The FEEEDS Advocacy Initiative and FE3DS, LLC. FEEEDS focuses on Africa economic development, Diaspora, Entrepreneurship/SMEs issues. FEEEDS also advises several organizations; co-hosts an annual Africa event with Gallup World Poll; and publishes @The FEEEDS Index. Sanders' national security expertise is based on her work at the White House; as Deputy Commandant-Eisenhower College, the National Defense University, the U.S. military's premier institution for strategic studies; her diplomatic postings; and her work on global issues. She is sought after by media such as Al Jazeera, China Television, VOA, and CNN for her Africa expertise. FE3DS, LLC provides business strategies on Africa trade, technology, power, renewables, affordable housing and aviation.

Jon Clifton
Global Managing Partner, Gallup
Jon Clifton is the Global Managing Partner of Gallup, an advisory firm that specializes in big data analytics of employees, customers, students and citizens. Jon's mission is to help 7 billion citizens be heard on their most pressing work and life issues through the Gallup World Poll, a 100-year initiative spanning 150 countries. Because of his expertise, Jon has been interviewed on BBC News, C-SPAN's Washington Journal, and Al-Jazeera, and has testified in front of the U.S. Congress on the state of American small business and entrepreneurship. He is a frequent contributor on Gallup.com and has written for The Hill, The Diplomatic Courier, and The Global Action Report.

Dr. Hippolyte Fofack – Honored Featured Speaker
Chief Economist, Director of Research and International Cooperation, African Export-Import Bank (Afreximbank)
Speaker Topic: How Afreximbank Leverages Its Programs to Support the SME Sector
Dr. Hippolyte Fofack has more than 20 years of experience in development economics, international trade, banking and international finance and academia. Prior to joining the African Export-Import Bank, he was with the World Bank Group, where he served in several capacities, including as senior economist and head of the Macroeconomic and Growth Research Program. In 2005, Dr. Fofack was elected to the African Academy of Sciences, a continental organization dedicated to the furtherance of science and its use for economic development and welfare improvement. He has served on the advisory board of Lincoln University in Pennsylvania and is a member of the Africa Society of the National Summit on Africa Board of Directors. He is also a member of several leading professional and scientific organizations, including the American Economic Association and the African Finance and Economic Association. Dr Fofack has been a guest editor of several prominent journals, including The World Bank Economic Review and Economic History of Developing Regions. Dr. Fofack has been published extensively, is Editor-in-Chief of Contemporary Issues in African Trade and Trade Finance (CIAT) and is a member of several editorial boards, including the Journal of African Development, the Journal of African Trade and the Gulf Economics Journal.

Dr. Francis Mangeni – Honored Featured Speaker
Head of Trade Promotion & Programs, Advisor to AfCFTA Secretary General
Speaker Topic: AfCFTA: How It Supports SME Participation in Regional Trade
Dr. Francis Mangeni has worked and consulted extensively on the multilateral trade system and African economic integration. He is a senior fellow with the Nelson Mandela School of Public Governance and has served as head of trade promotion and programs with the AfCFTA and director of trade customs and monetary affairs with the Common Market for Eastern and Southern Africa. He has served as advisor to the Minister of Commerce and Industry of the government of Malawi, senior economist at the Permanent Delegation of the African Union to the United Nations and regional trade policy advisor at the Commission of the African Union, and acted as a consultant for numerous regional and international organizations. His analytical work has focused on the social and economic implications of economic reforms, negotiation preparation and trade opportunities. Dr. Mangeni's analyses have informed key initiatives for economic integration throughout Africa and served as a basis for advice to African diplomats attending World Trade Organization conferences and trade negotiations with Africa's major partners.

Tagged:
Copyright © 2021 FEEEDS Initiative. All rights reserved. Distributed by AllAfrica Global Media (allAfrica.com). To contact the copyright holder directly for corrections — or for permission to republish or make other authorized use of this material, click here.