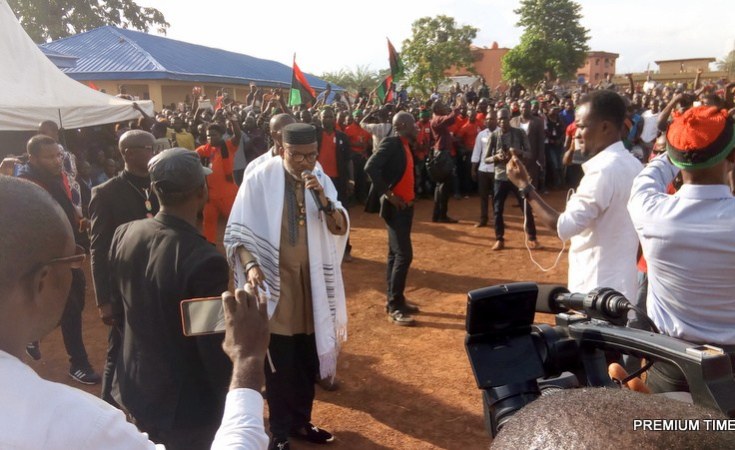 The Kenya government has dismissed claims that it is linked to the arrest and eventual extradition of separatist leader Nnamdi Kanu back to Nigeria, saying it could not ascertain whether the act took place in Kenya.

Kenya's denial deepens the diplomatic crisis, given that Nigerian authorities had indicated they seized the activist in London before extraditing him to Nigeria, a claim the British government has since denied.

Mr Dean Hurlock, the head of communications at the British High Commission in Nigeria has denied the leader of the Indigenous People of Biafra (IPOB) was arrested or extradited from the UK and revealed that the British government was in the process of seeking clarification from Nigeria on the circumstances surrounding the arrest and extradition.

"We can reaffirm that Nnamdi Kanu was not arrested in the UK nor was he extradited from the UK," Mr Hurlock said.

But yesterday, Mr Kanu's family roped Kenya into the conflict when it sensationally claimed that the secessionist leader had been arrested in Kenya from where he was extradited to Nigeria.

Yesterday, the Director General of Immigration Services Alexander Muteshi dismissed the claims of Kenya's complicity, arguing that it was not possible to tell whether Mr Kanu had entered Kenyan territory.

"I can't know that," Mr Muteshi told the Nation when asked whether the claims made by the family were true.

"I am not in the picture of his presence in the country. I am only able to tell if somebody entered the country legally," he added, leaving room for speculation as to whether Mr Kanu has sneaked into Kenya through either illegal routes or under a false name.

Government Spokesman Cyrus Oguna refused to discuss the matter and instead referred the Nation to Mr Muteshi, even as the family assailed the Kenyan government, accusing it of having committed the most serious violation of international law.

"The Mazi Nnamdi Kanu's family has learnt that he was unlawfully arrested in Kenya, detained and subsequently subjected to extraordinary rendition from Kenya to Nigeria where he is now detained," the family said, through Mr Kingsley Kanu, his brother.

Mr Kanu was arrested last Sunday by what sources say was a combined operation of Nigerian and foreign security officers. But the exact location of his arrest remains contentious.

The family's claims, if true, casts Kenya once again in the eye of international focus so soon after similar claims were made over the abduction and eventual deportation of Selahaddin Gülen to Turkey. He is the nephew of US-based Islamic preacher Fethullah Gulen, who is accused of organising a coup against President Recep Tayyip Erdogan in 2016.

Kenya has a negative history of alleged complicity in similar incidents of abduction and deportation of asylum seekers that have taken place previously.

Mr Abdullah Ocalan, the founder of the Kurdish Workers' Party (PKK), was captured in Nairobi in February 1999 and promptly sent to Turkey to face trial in an operation that the Kenya government is accused of having facilitated.

The arrest and subsequent deportation of Mr Gulen, who was a registered asylum seeker in Kenya and also a permanent US resident, was in tandem with Kenya's conduct in the past.

Turkey accuses Mr Gulen of being a member of an outlawed organisation headed by his exiled uncle.

Mr Gulen was detained in Kenya for a month before he was handed over to the Turkish authorities on May 31, 2021 despite a court case and orders that had been issued against his detention.

The Kenyan government is yet to comment on the incident.

Mr Kanu, who has been labeled a fugitive by the Nigerian authorities, was taken to a Nigerian Court on Wednesday, where government officials claimed they had arrested him in London, UK.

In their statement, the family claimed that Mr Kanu was on a visit to Kenya when he was arrested, detained and handed over to the Nigerian authorities who then flew him to Nigeria.

"My brother has been subjected to extraordinary rendition by Kenya and Nigeria. They two governments have violated the most basic principles of the rule of law," Mr Kingsley said in remarks widely quoted in the Nigerian media.

"Extraordinary rendition is one of the most serious crimes states can commit. Both Nigeria and Kenya must be held to account. I demand justice for my brother, Nnamdi Kanu."

Mr Kanu is accused of engaging in subversive activities that include inciting violence through television, radio and online broadcasts against Nigeria and Nigerian State and institutions.

Kanu was also accused of instigating violence especially in the Southeastern Nigeria that resulted in the loss of lives and property of civilians, military, paramilitary, police forces and destruction of civil institutions and symbols of authority.

In a statement released yesterday, Human Rights Watch said Mr Gülen's abduction and deportation is only the most recent example of the Kenyan authorities' failure to safeguard asylum seekers on Kenyan soil, instead allowing their deportation to potentially life-threatening situations.

"Kenyan authorities have a responsibility for what happens within their borders, and should investigate the possibility of complicity of its officials in this flagrant disregard for due process," said Mr Otsieno Namwaya, the East Africa director at Human Rights Watch.

"This is even more urgent given the negative history of alleged complicity of Kenyan authorities in previous incidents of abduction and deportation of asylum seekers."