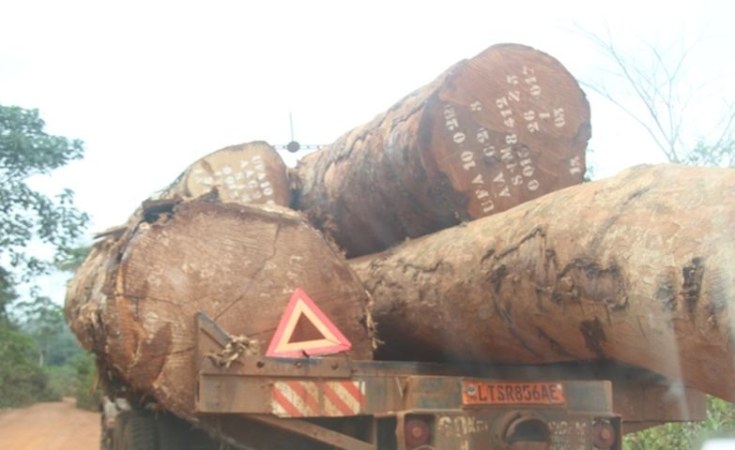 Ndi Eugene Ndi | Nation Media Group
A truck heading to the Port of Douala in Cameroon is seen leaving a forest in Ngoyla in the East.
Reporters sans Frontières (Paris)
press release

Reporters Without Borders (RSF) condemns logging company FIPCAM's judicial harassment of Cameroonian journalist Nestor Nga Etoga for the past five years after he investigated some of its practices. RSF calls on the company and Cameroon's justice system to put a stop to the use of legal proceedings to try to silence this journalist.

Etoga, who is the editor of the weekly Le Renard, senior editor at the Les Scoops d'Afrique website and a reporter for other news sites, has had to travel more than 10,000 km and spend around 30,000 euros in legal and travel costs since 2016 as a result of the lawsuits by FIPCAM, which specialises in felling Cameroon's tropical forests.

When he appeared in court for the 94th time yesterday, the hearing in the case was postponed yet again. Since 24 November 2016, the date of the first lawsuit, he has had to keep travelling the 270 km between the cities of Douala and Mfou to attend hearings in three suits brought against him.

The conflict dates back to September 2015, when Etoga confronted FIPCAM executives with documents he had obtained suggesting that the company had been guilty of forestry offences, corruption and violating employee rights.

Etoga told RSF that a FIPCAM executive tried without success to dissuade him from continuing his investigation and even offered him money and the possibility for doing PR work for the company. Etoga pressed on with his research and wrote several stories criticising FIPCAM practices, with the result that FIPCAM filed several suits accusing him of waging "a smear campaign" against the company and its CEO.

Etoga was even arrested and held for several hours in October 2016 as a result of these accusations. He was acquitted on 3 February 2017 in an initial criminal libel case that has been referred to a Douala appeal court. Two other cases were meanwhile brought against him, one for defamation and the other for "blackmail and complicity in blackmail."

When RSF tried to question FIPCAM about these accusation, the company replied that it would provide the information to the judicial authorities "at the appropriate moment" and that the reason for all the many hearings was a question "to put to the courts."

"All these judicial proceedings in various cities for more than five years are clearly meant to exhaust this journalist psychologically and financially, said Arnaud Froger, the head of RSF's Africa desk. "We firmly condemn the use of systematic lawsuits with the aim of deterring journalists from investigating. The Cameroonian justice system is also partly to blame. Ordinary lawsuits should not give rise to interminable legal debates and countless hearings. This judicial treatment facilitates the strategy of using lawsuits to intimidate and gag journalists."

Several former FIPCAM employees contacted by RSF criticised work conditions within the company, corroborating Etoga's reporting. In an open letter to Cameroonian President Paul Biya in April 2019, their spokesperson called for an investigation into FIPCAM's activities and said they had provided Biya aides with evidence of "illegal forestry," "tax fraud" and "corruption."

Investigative reporting is extremely difficult in Cameroon, where the media censor themselves to a significant degree, especially on sensitive subjects. Gag suits, judicial harassment, and proceedings before special courts and military courts are also part of the arsenal used to reduce journalists to silence.

The victims include Amadou Vamoulké, the former director-general of the Cameroonian state radio and TV broadcaster CRTV, who has been detained provisionally for nearly five years. In what is a record for a Cameroonian journalist, Vamoulké is due to make his 73rd appearance before a special criminal court in Yaoundé today.