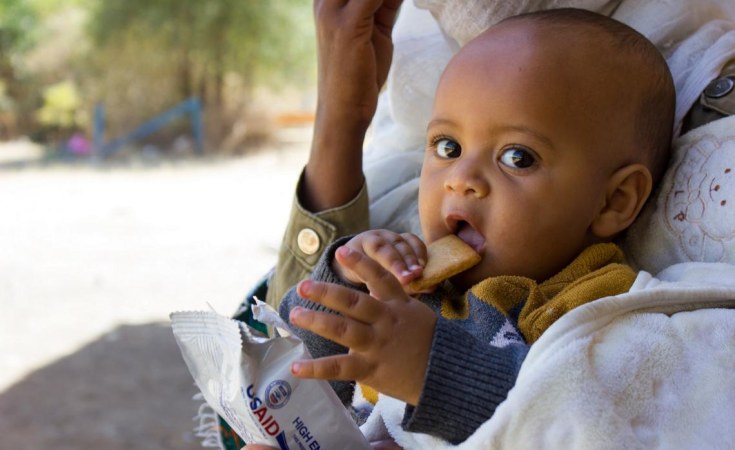 UNICEF/UN0412581/Leul Kinfu
A small child eats a nutritious high-energy biscuit at a school that has been converted into a shelter in the Tigray region where the UN humanitarian agency OCHA estimates that 91 per cent of the population is in dire need of food assistance.
Addis Standard (Addis Ababa)

Addis Abeba — The Ethiopian government contradicted a report by UNOCHA that suggested Amhara Special Forces (ASF) carried out the destruction of Tekze river bridge. Through the Ethiopian Broadcasting Corporation (EBC) where it stated, "Sources from the National Defense Forces confirmed the terrorist TPLF sent some team yesterday morning and demolished Tekeze bridge." The report added, "TPLF did it to halt the entrance of the federal military and to force humanitarian aid workers to transport aid by planes."

Recently, the United Nations Office for the Coordination of Humanitarian Affairs (UNOCHA) has expressed its concerns over recent developments in Ethiopia's Tigray region following the unilateral ceasefire declaration by the Ethiopian government on 28 June 2021.

UNOCHA also said onThursday that Tekeze Bridge that links Amhara and Tigray regions in Ethiopia has been destroyed. "On 29 June, Amhara authorities stated their intent not to vacate areas currently controlled by Amhara Region Special Forces (ASF) in Southern, Western, and North Western Tigray. Reportedly, ASF have not vacated positions West and South of the Tekeze river. Reportedly, on 1 July, the bridge over the Tekeze river, connecting Gondar - Shire was blown up by ASF, "OCHA said.

The report also discussed the humanitarian situation in the region stating, "For the past two weeks, humanitarian operations in Mekelle, and towards Adigrat (Eastern), Abi Adi (Central), and to Southern parts of Tigray were curtailed by denials of movement and interference by armed elements. In the Central zone, following the killing of three aid workers from MSF-Spain near Abi Adi town on 25 June, humanitarian agencies evacuated their personnel and suspended operations, impacting the population's access to healthcare and life-saving assistance. Partners had relocated staff from Axum as well as from Samre (South-Eastern), " adding, "Armed elements hindered partners' access to Samre, while medical and nutrition supplies were taken from relief convoys. On 28 June, partners, including UN Agencies, reported several incidents related to ENDF elements entering their offices and confiscated telecommunications/internet equipment in Mekelle, Dansha, and Abdurafi. VSATs and other communications equipment were also taken from an INGO compound in the South-Eastern zone. "

The developing report disclosed and discussed power outage on the region as wel as road closures, it said, "Throughout Tigray, electricity and mobile networks are cut, and communications are only possible via satellite phones and VSAT connections in a few agencies' compounds in Mekelle, Shire and May Tsebri. Flights from Addis - Mekelle remain suspended since last week. Road access to Tigray remains blocked, including from Addis - Mekelle (through Afar) and Amhara, i.e., Gondar - Shire and Gondar - Humera - Sheraro. Reportedly, outbound movements from Mekelle - Semera (Afar) and Sheraro - Humera were allowed. In addition, partners report severe shortages of cash and fuel, potentially compromising the relief operations and duty of care of aid workers on the ground."

As more information concerning the destruction of the Tekeze Bridge, Addis Standard's multiple attempts to get hold of concerned government officials in Amhara Regional State to comment on the UNOCHA report were unsuccessful. AS