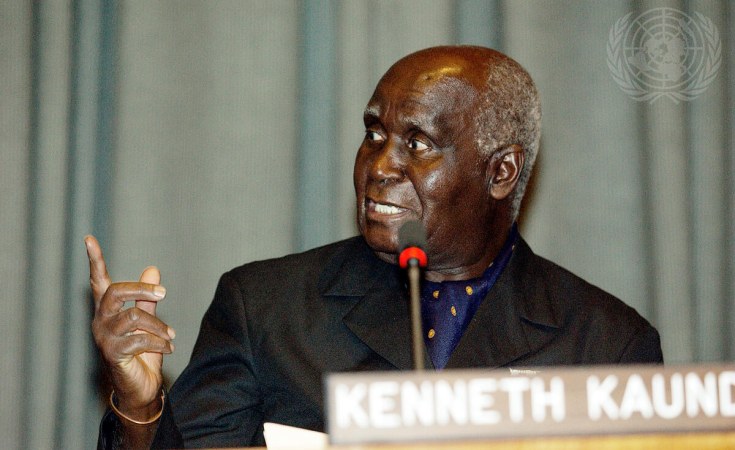 Geingob, who was accompanied by international relations minister Netumbo Nandi-Ndaitwah, was among the foreign dignitaries who attended Kaunda's state funeral in a socially distanced ceremony at a Lusaka stadium on Friday.

The 97-year-old died in hospital from pneumonia last month.

In his tribute to the former statesman, Geingob said Kaunda's influence stretched beyond the borders of his motherland.

Geingob eulogised Kaunda as a giant on the African continent, an extraordinary personality who was one of the founding fathers of African independence.

"As an icon of our liberation struggle, this luminary has left an indelible footprint on this continent, a perpetual reminder of his profound impact which continues to reverberate from Cape to Cairo and beyond the shores of Africa," he said.

Describing him as an outstanding Pan-Africanist endowed with great passion for the liberation of the entire African continent from the yoke of colonialism, Geingob said Kaunda pledged in word and deed that Zambia's independence in October 1964 would open the doorway towards the total freedom of all the countries in southern Africa.

Many of these movements, which had armed querrila wings, operated from Zambian soil to overthrow the colonial forces in their respective countries.

At the continental and international level, Geingob said Kaunda was a distinguished leader who in 1963, served as the president of the Pan-African Freedom movement for East, Central and Southern Africa, as chairman of the Organisation of African Unity (OAU) from 1970 to 1971 and again from 1987 to 1988 and the chairman of the Non-Aligned Movement (NAM), whose summit he hosted in Lusaka in 1970.

"In all his endeavours at the helm of these vanguard political institutions, comrade Kaunda's aspiration and commitment was to end apartheid and white minority rule in Southern Africa," he said.

"Indeed, he succeeded in his lifetime to accomplish these noble objectives," he added.

In later life, Geingob said Kaunda used the same vigour and relentless energy to promote the ideals of Pan-Africanism and to support the fight against HIV/AIDS.

"I consider comrade Kaunda as my political father, to whom I was introduced by another one of Africa's extraordinary personalities, comrade Sam Nujoma, the Father of the Namibian Revolution," he said.

He said the UNIN trained thousands of Namibians in preparation of Namibia's independence to take charge and manage the affairs of an independent Namibian government, a task which was successfully accomplished.

"We thank comrade Kaunda and the rest of our Zambian brothers and sisters for their support. To comrade Kaunda's dear children, grandchildren and family; to the fraternal people of Zambia; we, the people of Namibia offer our sincerest condolences to you on the loss of this great Pan-Africanist and a beloved son of Africa," he said.