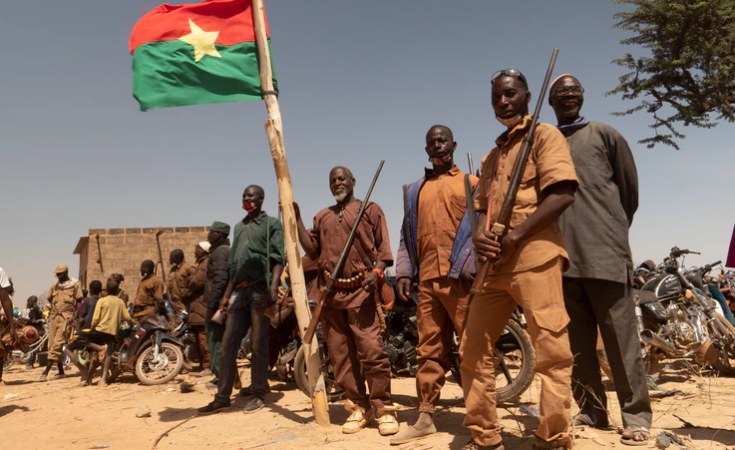 Ouagadougou, Burkina Faso — The attack in Burkina Faso last month that killed 160 civilians was in retaliation for activity by pro-government civilian militias in the area, according to Human Rights Watch.

In the daytime, Daouda Diallo is a scientist. By night, he is one of Burkina Faso's most prominent human rights campaigners.

He runs the Collective Against Impunity and Stigmatization of Communities, a campaigning group set up in the wake of the Yirgou massacre, an attack that saw around 200 people killed, mostly from the Fulani ethnic group, in early 2019.

In Burkina Faso's conflict with the Islamic State group and al-Qaida, the number of civilians killed by security forces has often come close to the numbers killed by the terror groups.

Diallo has been deeply affected by this.

"I'm a very sensitive person -- I like to help the widow and the orphan, the vulnerable. ... I've devoted my time to this, but it's not an easy job, and I go unpaid. I do it for humanitarian reasons," Diallo told VOA.

Diallo also points out that one of the government's most controversial policies is a law that allows preexisting civilian militias, known as koglweogos, to be armed and trained by the government.

The new force is called the Volunteers for the Defense of the Homeland, or VDPs.

When the law was created in 2020, Human Rights Watch said arming poorly trained civilians could lead to abuses.

So far, at least 95 people have been killed in 38 incidents of violence against civilians by VDPs, according to data from the Armed Conflict Location and Event Data Project.

Henry Wilkins / VOA
A member of a civilian militia at a rally in Zagtouli, Burkina Faso, February 14, 2021.

A man, whose full name has been withheld to protect his safety, says he watched as VDPs killed two of his neighbors after accusing them of being terrorists.

"...Issa was sick and decided to go to the market. The VDPs shot at him there. Issa ran to his house, where they killed him. Bad things happen. That's why I had to run away. The militias are chasing you; the terrorists are chasing you."

Burkina Faso's Ministry of Defense did not respond to VOA's interview request about the incident.

One VDP leader, who asked to not be named, said most VDPs simply want to defend their homeland, many having had terrifying encounters with terrorists themselves.

"The terrorists came and burned my house. They were looking for me, but fortunately I was not around. They also killed some of my neighbors and burned their houses as well. It's because of that I really felt I had to join the VDPs," he said.

A leader of the ruling MPP party admits it's possible VDPs commit abuses -- but says they are necessary.

"Within the framework of the fight against terrorism, we are obliged to face the fact that the VDPs make a very big contribution," said Lassane Sawadogo, MPP Party Executive Secretary.

As widespread protests against insecurity in Burkina Faso have swept the country in recent weeks, President Roch Marc Christian Kabore said he will reform the VDPs as one way of improving security.