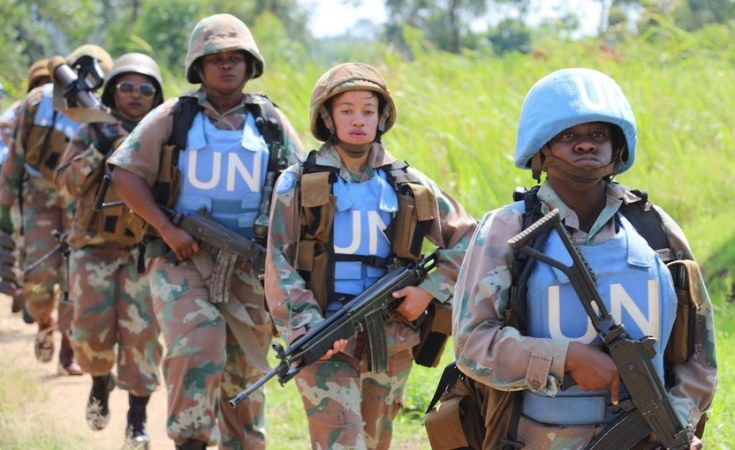 Michael Ali / MONUSCO
Women peacekeepers from South Africa on patrol in the Democratic Republic of the Congo.
UN News Service

A new government action plan in the Democratic Republic of the Congo (DRC) has the potential to reverse the urgent and tragic deterioration in the east of the country, where thousands of human rights abuses are being committed against civilians by armed militants, the senior UN official in the country told the Security Council on Wednesday.

Bintou Keita, the Secretary-General's Special Representative and head of the UN Stabilization Mission in the DRC, said fresh strides towards peace and stability are prerequisites for the mission, known as MONUSCO, to responsibly withdraw, in line with its planned drawdown.

Crisis in the east

The security and humanitarian situations in the eastern Congolese provinces of Ituri, North and South Kivu, continue to be a source of grave concern to the international community.

Amid ongoing violence by armed groups, including the Allied Democratic Forces (ADF), the eruption of Mount Nyiragongo on 22 May led to large-scale population movements, exacerbating existing challenges posed by the COVID-19 pandemic and resurgent cases of Ebola.

Recent bomb explosions were also recorded in the town of Beni, and intercommunal tensions are flaring in Ituri and South Kivu.

"Civilians remain under serious threat from attacks by armed groups and in the broader security context", Ms. Keita warned.

Fifteen women are serving in ministerial posts, representing an increase of almost 30 per cent over the last Government.

Also noting the recent declaration of a "state of siege" in Ituri and North Kivu Provinces - where violence by armed groups has been among the worst in the country - she welcomed commitments by the new Government to improve civilian protection, combat those perpetrating crimes against them, and hold national and local elections in 2023.

In particular, Ms. Keita drew the Council's attention to an action plan recently released by the new Government, which aims to neutralize violent armed groups.

It also includes a new programme for the disarmament, demobilization, community reintegration and stabilization of former combatants.

As previously requested by the Council, Ms. Keita announced the establishment of a joint working group through which MONUSCO and the Congolese Government will serve together, to push forward the promising new action plan.

Launched on 5 July, its first task will be to develop a plan for MONUSCO's transition and gradual drawdown, including concrete milestones and indicators, to be submitted to the Council in September.

Discussions about MONUSCO's drawdown have been under way since 2018, when a long-sought peaceful handover brought President Félix Antoine Tshisekedi Tshilombo to power.

A joint strategy for the Mission's drawdown, laid out in 2020, is progressively consolidating the UN's footprint in North Kivu, South Kivu and Ituri.

MONUSCO's operations in the Kasaïs ended in June, and according to the joint strategy, the Mission will also withdraw from Tanganyika province by mid-2022, should conditions allow.

Healing Bodies and Minds After Sexual Violence in the DRC