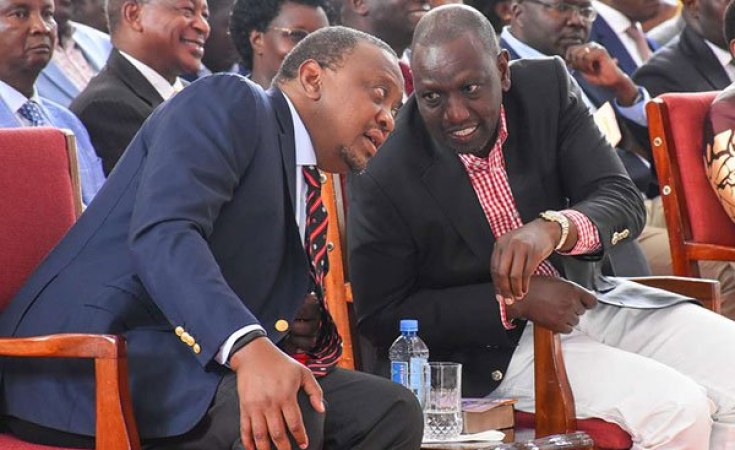 Deputy President William Ruto's allies now want President Uhuru Kenyatta to keep off the 2022 succession politics to create what they have termed as a 'level ground' for all players.

President Kenyatta and Orange Democratic Movement (ODM) boss Raila Odinga have instructed their aides to start working on how to come up with a coalition, with the possibility of fielding a presidential candidate in the 2022 General Election, a move that now has sent jitters in the Tangatanga camp linked to DP Ruto.

And now, leaders allied to Dr Ruto are asking the Head of State to emulate his predecessor President Mwai Kibaki, who, despite being rumoured to be pulling strings under the carpet, was seen as removed from the politics to succeed him in the March 2013 elections.

With President Kenyatta putting leaders under one roof, the Building Bridges Initiative (BBI) team comprising himself, Mr Odinga, Mr Kalonzo Musyoka of Wiper Party, Mr Musalia Mudavadi of Amani National Congress's (ANC), Ford Kenya's Moses Wetang'ula, Mr Gideon Moi of Kanu and National Rainbow Coalition (Narc) boss Charity Ngilu, and isolating his deputy, the Tangatanga lawmakers are crying foul that the move is targeted at their camp and state machinery is likely to be used against them, creating what they have termed as "unfavourable ground".

Soy MP Caleb Kositany, considered the DP's unofficial spokesperson, wondered why President Kenyatta has vigorously hit the campaign trail, unlike during the 2013 and 2017 elections when he was seeking to be elected.

"We need to ask President Uhuru Kenyatta, what exactly does he want? Because I have never seen elsewhere in the world where the president who has served his two constitutional terms and is coming to an end, hitting the campaign trail, campaigning for nothing. You cannot see what he is campaigning for," he said.

Mr Kositany yesterday told the Nation that even though it is already too late for the President to carry himself as Mr Kibaki did, it would be ideal if he stayed out of the game.

"It would be better for him not to do things that favour a certain camp, just like what Mwai Kibaki did, but it is now too late because he has hit the ground," he said.

Turkana Governor Josphat Nanok, foe-turned-ally of the DP, argued that if the President wants to retire respectfully, he should embrace all the teams and let Kenyans decide who will be their fifth president.

"The President should make peace with both friend and foe for the purpose of retiring honourably," said the second-term county chief who is also the national coordinator of Dr Ruto's economic blueprint.

Malindi MP Aisha Jumwa, another foe-turned-ally of the second-in-command said: "We expect the President to respect the Constitution. Retire honorably and respect the will of the people in the ballot come 2022."

Mathira MP Rigathi Gachagua asked the Head of State to desist from coercing those from his backyard to rally behind one of the Nasa principals, arguing that any attempt to influence his succession will see him share the fate of retired President Daniel Toroitich arap Moi (now deceased).

"He risks being disrespected like President Moi if he tries to force a project on the people of Kenya," said Mr Gachagua.

Although the recent political events imply that the Head of State would want to have a say in his succession due to the differences with his deputy, the question is whether the President has the political clout to influence his succession, following the poor performance of his party in recent by-elections.

Most of the political analysts who have been interviewed by the Nation have argued that without the BBI, which will increase executive positions, Mr Kenyatta will not manage to influence his succession.

Recently, when the President met leaders from lower Eastern, led by Mr Musyoka and governors Ngilu (Kitui) and Alfred Mutua (Machakos), at State House in Nairobi, he underscored the need for leaders to unite, noting that a country cannot move forward if leaders are divided.

However, Jubilee Party Secretary-General Raphael Tuju insists that President Kenyatta had an interest in ensuring the person who takes over from him does not water down everything he had done.

Mr Tuju's deputy, Mr Joshua Kutuny, who is also Cherang'any MP, told the Nation that the President will have to be active in his succession game plan for the sake of the country's posterity.

"For the issue of posterity, peace and unity of the country is the part which should not be overemphasised, if you see the relationship that has been built, it might stand the test of time," said Mr Kutuny.

He accused Dr Ruto for trying to tarnish the handshake's image, yet he also contributed to it.

"From the onset, the President was requesting everybody to be patient. Ruto knows very many meetings which took place at the State House where the President made commitments that 'you guys give me time'. But what we saw was someone who bolted out and ignored the President's request, so his tribulations are of his own making," claimed the Cherang'any MP.

The sentiments were echoed by Nyeri Town MP Ngunjiri Wambugu, who said the DP had initiated an agenda contrary to that of President Kenyatta, thinking that the Head of State would rally behind him, but that did not happen.

"Ruto was never isolated, he isolated himself because the President has been delivering his agenda and this required people to work with him. The President is like the team leader. He has the vision hence others have to help him achieve this. But when you start running your own agenda, you actually isolate yourself since he wanted to divert the President to support him (Ruto) in his pre-mature 2022 campaigns," said Mr Wambugu.

According to political analyst-cum-governance expert Javas Bigambo, without a BBI referendum, the Head of State will not find it easy to influence his succession and there is a likelihood he could find himself between a rock and a hard place.

"Without the BBI proposed changes, the President will find himself in a Mwai Kibaki situation, where he clandestinely influences state resources for his preferred candidates, or find himself in a Mzee Moi situation where he openly endorses a candidate and awaits the political consequences," explains Mr Bigambo.

Kenyatta is Not 'Finished' Yet - Kutuny