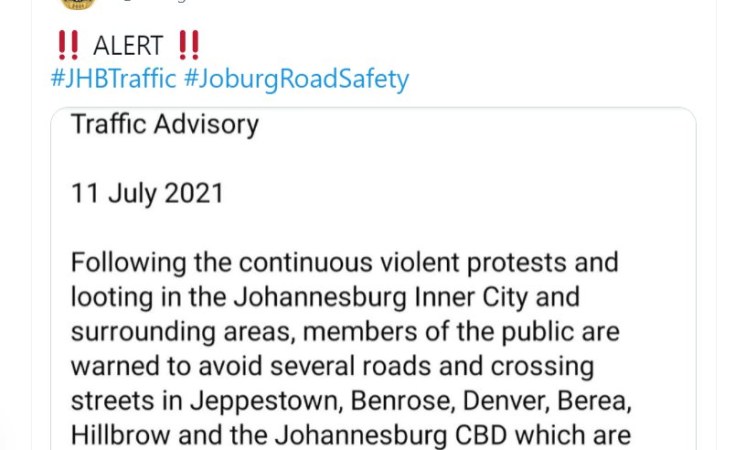 Thuggery, looting and lawbreaking that started in KwaZulu-Natal earlier this weekend after the imprisonment of Jacob Zuma spilt over into Gauteng on Sunday, more specifically Alexandra and the Johannesburg East Rand.

In his address to the nation on Sunday night, President Cyril Ramaphosa said: "Let us be clear, as a nation, that we will not tolerate acts of criminality. Those who are involved in acts of violence will be arrested and prosecuted. Those found guilty of breaking the lockdown regulations will receive the stipulated penalty."

The Office of the Chief Justice placed judges and courts, specifically in Gauteng and KZN, on alert following the emergence of a threatening voice note on WhatsApp.

The Defend our Democracy campaign, led by the Ahmed Kathrada Foundation, condemned the violence and said it was particularly concerned about what seemed to be the active mobilisation of disaffected people, particularly youth, behind a thinly veiled political campaign.

In a media statement released on Sunday, the National Joint Operational and Intelligence Structure (NatJoints) announced that several...