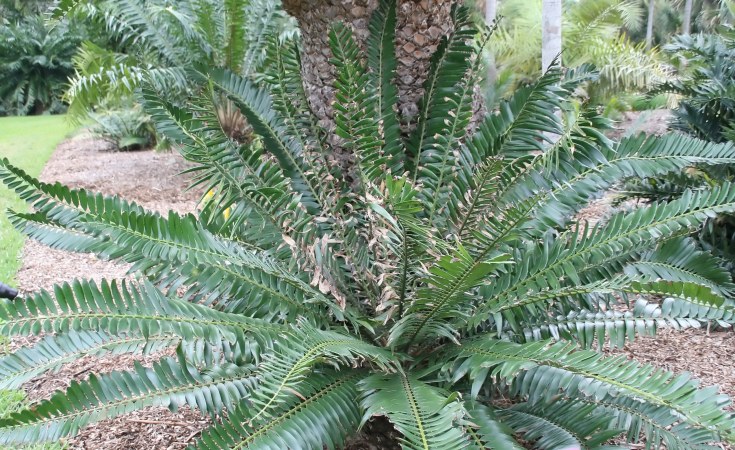 Conservationists in Malawi have launched an ambitious project to rear 50,000 endangered Mulanje cycads - palm-like trees with poisonous leaves that have been around since before the time of the dinosaurs.

Due to their novelty factor, cycads are one of the most trafficked groups of plants on the planet.

But the Mulanje cycad is in peril mostly due to population expansion and habitat destruction, said Carl Bruessow, director of the independent Mulanje Mountain Conservation Trust, which is behind the project.

With funding from the Mahomed bin Zayed Species Conservation Fund, the trust has started rearing seedlings, or "pups" of this "living fossil" to be planted at sites around Mount Mulanje, in southern Malawi.

Bruessow told RFI he had just delivered 10,000 seeds to a partner organisation in the area.

He said in addition to protecting the trees, which stand out against the landscape because of their thick trunks and spiny palm-like leaves, the project aims to ensure the long-term survival of two other species: a weevil responsible for the trees' pollination, and the striking orange and black striped Mulanje tiger moth whose caterpillars feed exclusively on the cycads' poisonous leaves.

This makes the moths toxic to predators like birds.

"It's one conservation story, but it's about protecting three species - all endemic," he said.

Julian Bayliss, a biodiversity and protected areas specialist who works throughout Africa, has studied the relationship between the tiger moth and the cycad. He told RFI that both were living fossils.

"This day-flying moth can display in numbers and attract females to mate without being eaten by birds," he said, noting that these competitive displays, normally seen only in birds or mammals, are unique to the Mulanje tiger moth.

"To evolve its lifestyle to live on the cycad would have taken millions of years," he added.

The moth, whose total population is thought to now number less than 2,000, is deemed critically-endangered.

Around 20,000 mature Mulanje cycads still grow in the wild in Malawi, according to the International Union for Conservation of Nature. It lists the species as vulnerable to extinction due to its declining numbers.

"I think cycads are resilient, it's human beings that have been messing around with them," said Bruessow.

"I'd like to move it [the Mulanje cycad] right off the list." He added that cultural perceptions of the tree in Malawi aid its conservation: having one growing in your garden is believed by many to provide protection from thieves and danger.

Mount Mulanje, with its towering mountain peaks and steep valleys and gorges, is famous for its plant biodiversity. At least 50 species that grow there are found nowhere else. A study published in March revealed two more species from the area that are new to science.

In the past, threats to the Mulanje cycad included the clearance of land to plant tea. Bruessow says the Mulanje cycad is now cultivated in gardens at a number of houses on tea estates. These are a valuable source of seeds, produced in their hundreds on huge orange cones.

The conservation group intends to strengthen existing stands of cycads around Mount Mulanje, including sites where the Mulanje tiger moth is known to breed.

"If we see a population of Mulanje cycads somewhere, we want to strengthen that and also enrich existing sites, and then join them up," Bruessow said.

Once Covid-19 travel restrictions are lifted, the plan is to extend the project to a hill above the town of Milange, just across the border in Mozambique, which is part of the cycads' original range.