Madagascar: Don't Look the Other Way - Madagascar in the Grip of Drought and Famine 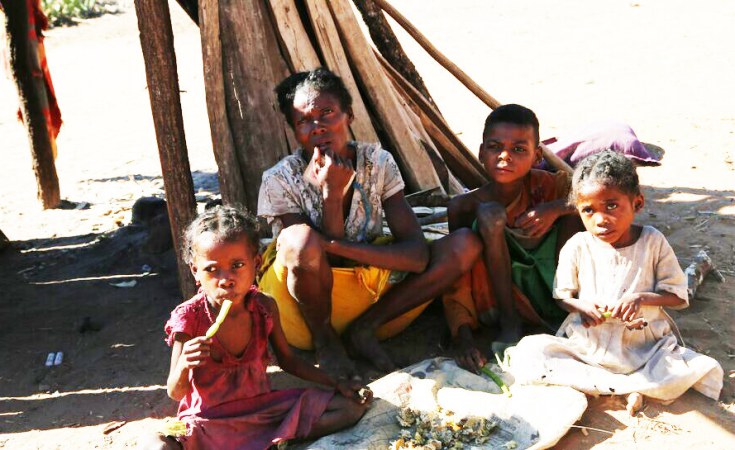 Severe hunger caused by climate change continues to affect southern Madagascar. People are living through the worst drought in 40 years, which has caused an almost total disappearance of food sources.

In recent months, for the first time in the country, pockets of Phase 5, or 'Catastrophe' food insecurity on the Integrated Food Security Phase Classification, have been recorded.

At least 1.14 million people in the Grand Sud need emergency food and nutrition assistance and have been suffering from hunger since the start of the lean season last September.

The World Food Programme (WFP) is sounding the alarm: if we don't act now, the number of people in Catastrophe will double by October.

Since the start of the 2020 lean season, WFP has assisted up to 750,000 people through general food distributions combined along with supplementary foods for the prevention of moderate acute malnutrition.

Eyewitness - people in the epicentre of the crisis

In Amboasary, one of the southernmost districts, about 14,000 people are estimated to be at IPC Phase 5 (Catastrophe) out of a population of around 200,000. On both sides of one road, the earth is dry and cracked and when you cross bridges there is no water. There is a stillness as people and cattle mingle where once there would have been rushing water.

Makeshift shops sell a handful of tomatoes, rice cakes and live chickens. But for many, there is no money to buy food and firewood -- let alone water and utensils to cook with. To have some money, families have sold most of their worldly possessions.

I meet Tamaria in Fandiova Centre, Amboasary. She is a mother of seven and has taken in children who have lost both parents. She sits outside her bamboo hut, barely 4ft by 4ft. Inside, there is a thin mattress -- nothing more.

A plate of dried cactus is in front of her and four children. They pick at the seeds.

WFP/Shelley Thakral
Underweight and malnourished children wait for treatment at a nutrition centre in Ambovombe district in June.

"There is nothing to do here," she says. "I have no land so I cannot cultivate anything. We live on wild tubers like fangitse and the red cactus in the forest. We sold all our domestic goods, including spoons. If we find green vegetables and want to cook them, for example, we need to borrow pots from other people. I have nothing left and it is painful."

"There is no activity, no work opportunity, no harvest, and nothing to put on the table," continues Tamaria.

"Two of my children usually go to the forest to gather wild tubers. I am staying at home during the whole day with nothing to do but wait for them to be back with what they have gathered. I walk 4 km to find what water I can."

There are women and children barefoot on the road between villages, walking hours to gather and carry what water and firewood they can. Without food and water, people are becoming weaker every day.

"Without WFP's assistance, since we're left with nothing to eat, I think we would have died," she says. "I don't know who to turn to. I pray day and night to see light at the end of the tunnel.."

"I'm happy to benefit from this support but there are many other people who also need help because they also don't have anything to eat. We do our best to make this food last as long as possible ... we limit our consumption to 14 handfuls of rice for one week."

"We save this food to ensure we have something in our tummy. We don't need to be full, just to eat something and to avoid being left with nothing to eat.

"Before getting WFP's support, I used to walk several kilometres to go to Ambovombe where I begged. Sometimes, I got 3,000 Malagasy ariary (less than US$1) that I had to make last for a few days. It enabled me to buy edible leaves for my family."

Critically, the lives of children are at stake as nutrition among under-5s deteriorates to alarming levels. Acute malnutrition has almost doubled over the last four months, from 9 to 16 percent. The number of children admitted for treatment for severe acute malnutrition in the Grand Sud between January and March was quadruple the five-year average, according to the latest government figures.

WFP/Tsiory Andriantsoarana
Mid-upper-arm circumference measurement of a child in Ambovombe, one of the districts with a very high level of malnourished children.

At one health centre in Amboasary, children are being treated for severe acute malnutrition by UNICEF which gives them a fortified paste/snack. They are fragile little ones. They sit, motionless; hunger holds these children in a state of shock and silence.

One brother and sister -- 3-year-old Makagoa and his sister Falento, 4 -- come with their aunt to the centre. Their mother is collecting water to sell, their father died from tuberculosis two years ago.

The situation in southern Madagascar is heart-breaking and unless WFP receives more funding -- US$ 78 million -- Makagoa, Falento, Tema, Tameria and thousands of others who are facing starvation will lose their WFP rations, their only means of survival.

The next planting season is less than two months away and the forecast for food production is bleak. The land is covered by sand; there is no water and little chance of rain.

We need to urgently scale up -- and more funds so that we can feed more people in need.

There are around 510,000 people living in desperation in this area, and we do not have a long time -- this is an island, and it takes three to four months for food to reach the country plus, given the poor infrastructure, another eight days by road.

Funding will help provide rations of 50 kg of maize, 10 kg of beans and two litres of oil, as well as nutritious food for the little children that desperately need treatment.

WFP is working closely with the Government which has a very good integrated plan for the south. This includes a water pipeline, resilience-building activities, and enabling communities to adapt their farming strategies -- for example, planting more drought-tolerant crops such as cassava, sorghum and millet instead of maize. But more support is needed for WFP and partners to break this recurring cycle of starvation.

Next Story
Tagged:
Copyright © 2021 United Nations World Food Programme. All rights reserved. Distributed by AllAfrica Global Media (allAfrica.com). To contact the copyright holder directly for corrections — or for permission to republish or make other authorized use of this material, click here.