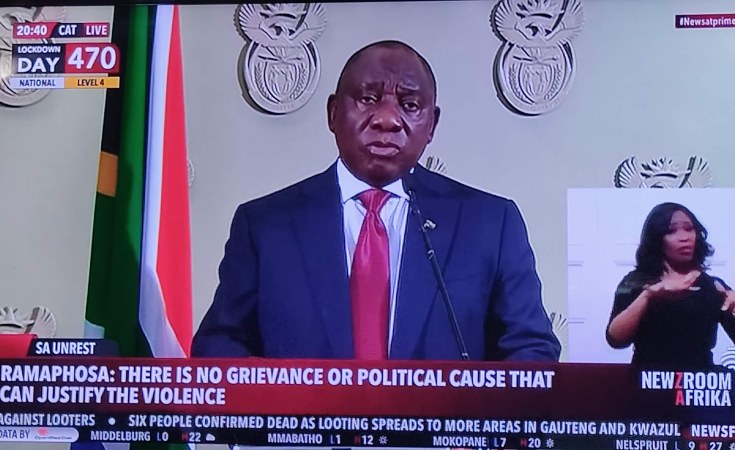 As chaotic scenes played out in pockets of KwaZulu-Natal and Gauteng, leaving many businesses gutted and looted by protesters, President Cyril Ramaphosa said it is of vital importance that calm and stability is restored without delay.

"Parts of the country are reeling from several days and nights of public violence, destruction of property and looting of the sort rarely seen before in the history of our democracy," said the President.

He described what was being witnessed as opportunistic acts of criminality, with groups of people instigating chaos merely as a cover for looting and theft.

"There is no grievance, nor any political cause, that can justify the violence and destruction that we have seen in parts of KwaZulu-Natal and Gauteng," he stressed.

While 489 people have been arrested in both provinces, the President fears that these events might spill over to the rest of the country.

In his televised address on Monday, President Ramaphosa condemned any act of violence that has claimed several lives.

"We know the high costs of this violence to the property to livelihood and businesses. The loss of human life is the greatest cost of all," he said.

He has called out those individuals who seek to agitate violence and disorder along ethnic lines.

The President reminded citizens that the Constitution was the foundation for the rule of law of the country.

"Many in our country and many people lay down their lives so that we can have this rule of law that guards against the abuse of power, protects the poor and the vulnerable."

He decried the disruptions that have prevented the sick from accessing medication from pharmacies, while food does not reach supermarket shelves, and healthcare workers cannot go to work.

In addition, he said the country's vaccination programme has taken a knock, as the country battles the third wave.

"We will soon be facing a huge array of food insecurity and medication insecurity in a few weeks," he warned.

"The path of violence, of looting and anarchy, leads only to more violence and devastation. It leads to more poverty, more unemployment, and more loss of innocent life."

Top of the agenda was to prevent any further loss of life or injury, protect property and safeguard social and economic infrastructure.

"We are therefore mobilising all available resources and capabilities to restore order."

In addition, government has employed the National Joint Operational and Intelligence Structure (NatJOINTS) to intensify deployments in all the affected areas in KwaZulu-Natal and Gauteng.

Meanwhile, police officers who are on leave will be recalled to boost their presence on the ground.

"In addition to greater visibility and an intelligence-driven presence in potential hotspots, we will be prioritising the prosecution of suspects alleged to be involved in this violence."

The National Security Council, chaired by the President, will meet twice a day to coordinate all measures necessary to restore stability.

"Let me be clear, we will take action to protect every person in this country against the threat of violence, intimidation, theft, and looting. We will not hesitate to arrest and prosecute those who perpetrate these actions and will ensure that they face the full might of our law."

The Head of State has vowed to restore calm and order so that people can get on with the task of rebuilding this country and creating a better life for its people.

He rallied people to come together to restore calm and everyone to stand up for the rule of law and peaceful resolution of conflict.

"We have agreed to work together to ensure the safety of drivers, cashiers, patients, and customers."

He urged people to exercise restraint and refrain from posting and circulating "inflammatory" messages on social media and spreading fake news that may create further panic.

The President has called on everyone to commit themselves not only to peace but also to greater economic opportunity for all.

"We are emerging now from a long period of uncertainty and stagnation. We have witnessed the effects of corruption and the erosion of the State, the terrible consequences of the abuse of power and neglect of duty."

He said South Africa rejects violence and chaos and will not be deterred from the task ahead.

"Together, we will defeat those who seek to destabilise our country, who seek to reverse the gains we have made. We will stand as one people, united against violence, unanimous in our commitment to peace and the rule of law," he added.