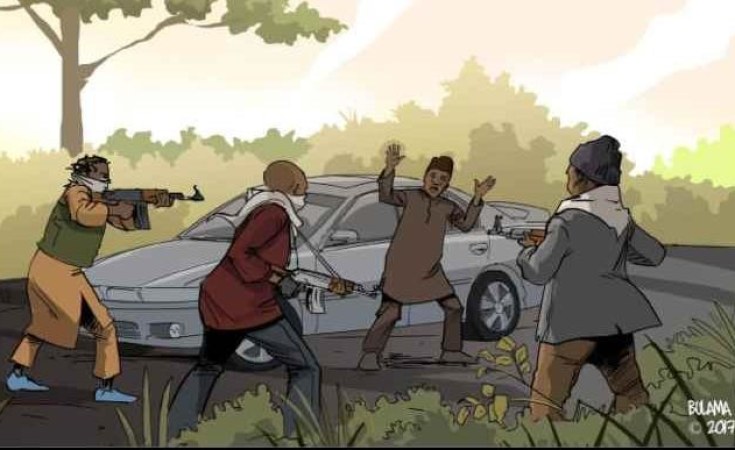 An average of 13 persons were abducted daily in Nigeria in the first half of 2021, according to a report by SBM Intelligence, bringing to 2,371 the number of persons kidnapped in the country within the first six months of the year.

SBM Intelligence is a leading research consultancy group, versatile in the area of primary data gathering, and analyses of data that provides clarity relating to political, economic and social issues in Nigeria and West Africa.

This came as the former senator representing Kaduna central, Shehu Sani said yesterday that the north-west would be a better place, if the Federal Government could deal with bandits with the same vigour used against secessionists.

This is even as the abductors of the Emir of Kajuru, Alhassan Adamu, yesterday released the monarch but held on to his family members.

Similarly, Gombe State government said yesterday it had deployed local security in all institutions in the state to compliment the efforts of the police and other security agencies in efforts to ward off bandits.

On the number of people kidnapped in the last six months, the SBM report covered abductions from January to June.

It indicated that a total of 2,371 persons were abducted across 36 states of the federation and the Federal Capital Territory, FCT.

The tally was derived from media reports and the national security tracker of the Council of Foreign Relations.

According to the report, N10 billion ($19.96 million as of June 30) was demanded as ransom for the kidnap victims.

However, the report did not state the total amount paid.

The highest number of kidnap victims, about 605, was recorded in February.

Niger State, the hotbed of kidnapping

The report indicated that Niger State recorded the highest number of persons abducted, with 643 victims in 28 kidnap incidents, while 58 people were killed during the abductions.

Schools were often targeted in the abductions that took place in the first half of 2021, with hundreds of students taken hostage in the north-west.

Reacting to the high incidents of kidnapping in the country, particularly by bandits, Shehu Sani, a former senator representing Kaduna central said, the north-west will be a better place if the Federal Government could deal with bandits with the same vigour used against secessionists.

The north-west had been the hotbed of banditry in recent times, with over 500 students kidnapped in the region by bandits this year alone.

The latest is the abduction of 121 students in Bethel Baptist Secondary school in Damishi, Chikun LGA of Kaduna State, on July 5. Less than a week later, the Emir of Kajuru and 13 members of his household were abducted at his palace.

While bandits continue to wreak havoc in the north-west, security operatives have successfully clamped down on leaders of secessionist movements in the southern part of the country.

Last month, authorities arrested and extradited Nnamdi Kanu, leader of the Indigenous People of Biafra, IPOB, back into the country to face charges of treason.

In a similar development, DSS operatives declared Sunday Igboho, a prominent voice in the call for 'Yoruba Nation', "wanted" after raiding his home and killing two people.

Many have criticised the government for not extending equal level of commitment to tackling banditry.

Speaking on Arise TV yesterday, Senator Sani said: "I can say in comparative terms that there's more interest for the government in going after secessionists than going after bandits. I'm not a supporter of secessionists and I believe that secession agitation are virtually wrong and we should work towards a united Nigeria.

"But I believe that if the same effort, the way they are going after Nnamdi Kanu and Sunday Igboho, is applied to these bandits, things would have been better for us in Kaduna and the north-western part of the country.

"Arresting bandits is more important to us than the issues of Igboho and Kanu as far as I'm concerned."

Sani, who lamented that only two of the 23 LGAs in Kaduna State were safe, noted that all the entry points of the state were besieged by bandits, adding that residents who lived on the outskirts were constantly running for their lives.

"Abduction has become a daily tragedy in Kaduna State, many even go unreported. Those that are reported are either mass abduction or the abduction of prominent people. We have reached a point, today, in this state where the only local governments that are safe are two -- Kaduna North and Kaduna South.

"All the other local governments in the state are under siege of bandits. We have never seen this kind of trouble and it appears that the abductions are even increasing by the day. All the four entrances to Kaduna State are under bandits' attack."

Also yesterday, the Emir of Kajuru in Kaduna State, Alhaji Alhassan Adamu was released by his abductors after spending a night with his captors, while other 10 family members of the monarch are still in captivity, the spokesperson of the Kajuru Emirate Council, Dahiru Abubakar, has disclosed.

Explaining how the emir was released, Abubakar said the emir was found in a nearby forest by his subjects while on their way to the farm.

His release came as it was earlier revealed that the bandits had contacted the emirate to demand N200 million as ransom for the emir and members of his family to be released.

Abubakar disclosed that the emir had since addressed his subjects, noting that he was in good condition, but would be taken to the hospital for medical check-up.

The monarch was kidnapped by bandits in the early hours of Sunday in Kajuru, headquarters of Kajuru Local Government Area of Kaduna State.

Abducted alongside the 85-year-old monarch were 13 of his family members, including two grandchildren.

Abubakar revealed that the abductors assured the emirate that the kidnap victims were not undergoing molestation, adding that they are all in good condition.

He said the emirate council is pleading with the abductors to release the monarch's relatives.

Meanwhile, Gombe State government has deployed local security in all the institutions in the state to compliment efforts of the police and other security agencies.

Already, the state has carried out vulnerability assessments to identify schools that may be the primary targets of bandits and kidnappers.

The state governor, Muhammad Inuwa Yahaya, who disclosed this while fielding questions from State House correspondents, after meeting with Professor Ibrahim Gambari, Chief of Staff to President Muhammadu Buhari at the Presidential Villa, Abuja, said the collaboration among the state government, religious and community leaders, including other stakeholders, had helped in addressing security challenges in the state.

Asked on the efforts of the state to protect schools and students from attacks by kidnappers and bandits, the governor said: "We did a vulnerability assessment of all the schools and we assigned the local security personnel; vigilante, to work with the conventional organized security in order to safeguard our schools against attacks.

"Above all, what we did for a wider security is reflected in the schools and we concentrated our effort in building big schools that will contain greater numbers, to reduce the chances, such that wherever students or pupils are exposed to such risks, we brought them closer to the main security agencies, so as to have peace and tranquility.

"That has succeeded in bringing peace to our schools, so the schools and the wider society are safe in Gombe and we thank God for that."

The governor, who said the government had taken proactive measures to safeguard the state, said the peculiar location of the state made it vulnerable.

"We are really located in the midst of the North-East, because we share boundary with all the other five states of the zone and as a result of that, even the effect of insurgency, Boko Haram and issues to do with farmer-herder clashes have caused some security challenges in Gombe in the past.

"But we have been proactive and we are following up day by day all institutions affected, for example, the traditional rulers, community leaders and the security agencies, trying to build mutual understanding and good relationship among our people," the governor said.