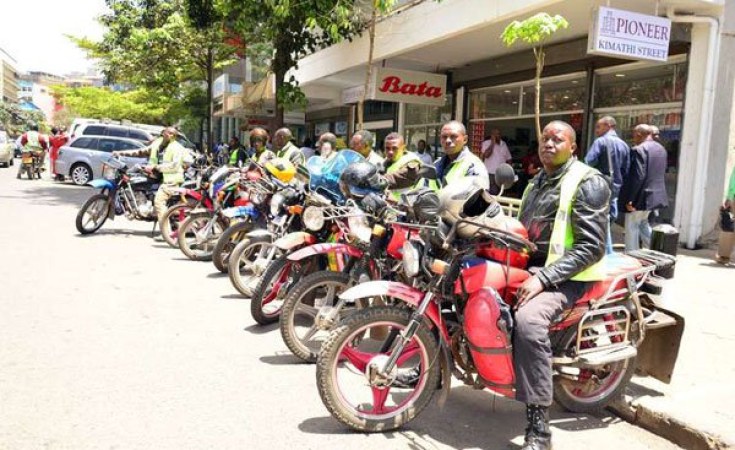 Muslim clerics in Lamu are agitating for a county by-law to ban Muslim women from riding on boda bodas.

The leaders represent Muslim organisations including the Coast Inter-Faith Council of Clerics (CICC) and the Council of Imams and Preachers of Kenya (CIPK).

They claimed that boda boda operators flout Islamic laws and the culture and heritage of Lamu by allowing female passengers to straddle their motorbikes.

The popularity of boda bodas, they claim, had increased promiscuity among married and unmarried women.

Women who ride on motorcycles, they lamented, expose parts of their bodies thus offending Islamic teachings.

Ustadh Abdulkadir also noted that children were dropping out of school to engage in the boda boda business, particularly on Lamu Island.

He said teenage pregnancies were also on the rise as boda boda operators give money and lifts to schoolgirls in exchange for sex.

"Lamu is a historical town with its own religious and cultural aspects. This town is populated predominantly by residents who profess the Islamic faith. We get irritated seeing our women and girls straddling boda bodas and exposing their body parts," he said.

"This are against Islamic teachings. There is a need for a county by-law introduced urgently to either ban boda bodas from operating here or Muslim women riding on these motorbikes."

Sheikh Shekuwe said motorbikes are generally not a woman-friendly means of transport.

In Islam, it is wrong for a man and a woman who are not husband and wife to be close to each other.

Sheikh Shekuwe said transport on motorbikes involves contact between the operator and the passenger.

He questioned why county officials were taking too long to remove boda bodas from Lamu town.

Lamu Old Town is arguably the most unique and beautiful Swahili town in Kenya, but the growing number of boda bodas is fast eroding efforts to preserve its cultural richness.

The Old Town was listed as a World Heritage site by Unesco in 2001 owing to its well-preserved culture and heritage spanning centuries.

Sheikh Shekuwe expressed concern that the town might lose its Unesco status if a formula is not introduced to move boda bodas out of Lamu Island.

"Muslim women being carried on bikes isn't allowed in Islam as it leaves them exposing their thighs publicly. How can you as a woman allow those sensitive parts to be seen by everyone? Those parts only belong to your husband," he said.

"You straddle motorbikes and leave them visible just like that. To make things worse, you even hold on to the rider tightly. You don't even make an effort to at least sit sideways with your legs dangling."

He added, "It's inappropriate and that's why promiscuity is on the rise. We have been receiving complaints of married women eloping with the boda boda riders. They even end up being divorced by their husbands. Something needs to be done to stop this or else, even the heritage status of Lamu will be a thing of the past."

A report from the CIPK Office, Lamu office shows that before the boda bodas were introduced in Lamu Island in August 2015, the cases of divorce and other marital problems reported at the office stood at three per week.

Since the introduction of the boda boda business however, the cases have now risen to as high as 8 cases per week.

"We're blaming the situation to these boda bodas since we have witnessed firsthand cases of recently divorced women being married to boda boda operators. That clearly shows that the two are interconnected," said Mr Shekuwe.

Imam Noordin Abdullahi of the Jamia Mosque in Hindi, Lamu West, said the boda boda sector has created employment for many young people.

But discipline has been a challenge for many riders, he said.

Some boda boda operators, especially in remote areas of Kenya, he said, have no morals as they prey on innocent schoolgirls who see them as moneyed village heroes.

But he said banning boda bodas is not an option.

He said women and adolescent girls should be the ones to be prohibited from riding on motorcycles, similar to what was done in Garissa County.

He called on religious leaders in Lamu and the country to come together and deliberate on ways of preventing Muslim women from riding on boda bodas.

"You can't take the north pole and south pole of a magnet, bring them together and expect they won't attract each other. That's exactly how women, girls and the motorbike riders do. There's no social distance while on boda bodas. The girls, married women and riders have feelings," he said.

"They exchange numbers and end up engaging in sexual relations. Let's come together as Muslim leaders and speak in one voice to ban our women from using the motorbikes as their means of transport. We won't be the first people to do so. Garissa did it."

Instead, she proposed by-laws to be introduced to control them.

Ms Kale said the number of road accidents in Lamu was increasing as many boda bodas are young men and children who are not even trained.

On the issue of women riding on motorbikes, Ms Kale said it is better that they be allowed to straddle motorbikes only during emergencies.

"Boda bodas have created employment for our youth. Banning them isn't proper. Let there be legislation to control them. My fellow women should stop riding on boda bodas unless there is an emergency. They should also cover their bodies well and avoid holding on to the drivers," she said.

He said his organization is working to instill discipline among members and ensure only adult operators operate a boda boda business.

"I agree. Boda bodas are immoral in most parts of Kenya but our members here are serious in the business. It's their sole income earner. We can't ban boda bodas in Lamu," he said.

"The sector has absorbed many youths that used to engage in theft, mugging and burglary. Residents would previously be waylaid and robbed of their valuables in broad daylight but such cases have greatly reduced since the boda boda trade was introduced."

Amina Abuli, a Muslim woman and Boni Women Community Elder in Bar'goni village said she has been using boda bodas and has no intention to stop since motorbikes were the only means of transport for her remote village.

Ms Abuli said banning women from riding boda bodas is unwarranted as they depend on them to access their only market at Hindi, which is about 21 kilometres from Bar'goni.

"It's wrong to ban women from using boda bodas. In places like Bar'goni, Basuba, Bodhei and other villages inside Boni forest, the only mode of transport is boda boda, as vehicles cannot access our villages due to poor roads. Pregnant women going to hospitals and those going to marketplaces like Hindi use these boda bodas to reach those places, which are far and cannot be accessed by foot. Those intending to ban us from riding on boda bodas should try to understand our dilemma," said Ms Abuli.

Zainab Athman, a resident of Matondoni within Lamu Island says she cannot stop using boda bodas since she is asthmatic and cannot walk long distances.

"For you to walk from Matondoni village to Lamu Old Town, one can spend up to one hour but with a boda boda, it's only ten minutes. So, why delay my journey because I am a Muslim woman, and not allowed to straddle motorbikes?" said Ms Athman.

Haki Africa Deputy Executive Director Salma Hemed termed such a proposal as unconstitutional and discriminatory, particularly to the female gender.

Ms Hemed says riding on a motorbike is a choice as no one is forced to use boda bodas.

She insisted that boda bodas were introduced across the country to aid movement of people and cargo from one place to the other since they are affordable.

She therefore says no one should decide how women should travel.

"I am not of that blanket opinion that fellow Muslim women be banned from using boda bodas in Lamu. It is unfair to prevent us from using boda bodas. First, no one is forced to ride on those motorbikes. It is a choice. Secondly, these boda bodas aid our movements. In Kenya, citizens enjoy the freedom of choice, movement, and many others. To our clerics, trying to introduce such restrictions to our women is lbreaching the Constitution and should stop," said Ms Hemed.

She proposed that women in Lamu be encouraged to dress decently and engage in boda boda business where such female boda bodas will be used to carry fellow women passengers only.

"The women being carried on boda bodas also have a choice of dressing decently and ensuring their body parts aren't exposed as alleged. I also call upon the religious leaders to encourage women to embrace boda boda business. They can dress decently and be used to carrying their fellow women only," she said.

Lamu Maendeleo ya Wanawake chairperson, Fatma Salim said it is up to the Muslim women to respect themselves if they must use boda bodas in their daily movement.

Ms Salim said banning women from using motorbikes was not the right option.

"It depends on how you value yourself first as a woman and secondly, the respect you have towards religion. As for me, I haven't, and I don't plan to ride on a boda boda since it's against Islam. I urge our women, especially those at their youthful age to use boda bodas only during emergencies," said Ms Salim.

But the town's narrow streets could only allow movement by donkeys or on foot and the introduction of motorcycles and tuktuks has crowded the spaces and eroded the town's traditional way of life.