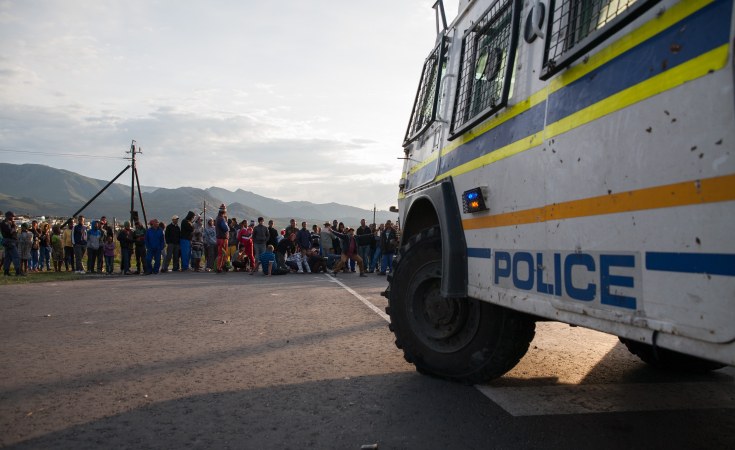 A new memoir by axed senior officer Jeremy Vearey suggests this might be key to saving the SAPS.

It is common knowledge that the South African Police Service (SAPS) leadership is in crisis. The problem is frequently attributed to a broken and opaque appointment system for senior managers. While this is true, a new memoir by recently axed (Major-General) Jeremy Vearey hints at a source much deeper than faulty organisational systems: shadows born of officers' pasts.

In psychology, the 'shadow' refers to the unconscious elements of a person's personality. Because conscious minds evolved to generate positive self-stories, the 'shadow' is where we bury aspects of ourselves with which we refuse to identify. Psychoanalysts suggest that by confronting and making peace with our shadow, we become whole.

This is difficult for anyone to do, but much harder for leaders of a police organisation born of former enemies. As Vearey describes the freshly formed SAPS of 1995, it was 'a Frankenstein's monster ... of the old South African Police and ten homeland police forces.' Although the SAPS is a very different organisation today, Vearey's book suggests that it remains steeped in mistrust and weighed down by the inefficient bureaucracy it birthed.

'I first met the enemy on 17 August 1987 at 1:30 pm,' writes Vearey in the opening pages of his memoir, Into Dark Water. The enemy was apartheid's South African Police (SAP), the precursor to the SAPS that he would one day help lead.

At the time, he was a teacher and member of uMkhonto we Sizwe (MK), the armed wing of the African National Congress (ANC). The Security Police arrested, detained and tortured him before he was jailed on Robben Island.

He was released in 1990 as part of the negotiated settlement between the ANC and apartheid government. By 1995 he found himself working in the building where he was once tortured, and drinking with the men who had arrested and assaulted him.

And while these encounters revealed that some were 'all too human outside the battlefield,' the personal and workplace conflicts would continue for decades. Not only between the old guard and new, but among any who feared, doubted or needed to deal with their fellow officers to move forward.

One way in which the SAPS tried to navigate the uncertainties of its birth was through bureaucratisation. In Vearey's telling, this took the form of irrational bureaucrats, 'admin Nazis' and 'petty ... management politics,' a new performance system and obsession with statistics that are 'often more manipulated than real.'

Reflecting on the consequences of this, Vearey recognises that the link between police work and reported crime is a 'fallacy' driving a 'charade' of police practice. Victims are 'devalued and reduced to mere metrics' while station commanders are subjected to 'gratuitous bullying' by superiors when reported crime increases.

And when pressure mounts, the SAPS embarks on 'endless ... restructuring ... in a race to secure positive statistics.' Knee-jerk reforms lead to 'countless misfired police operations and misdirected government initiatives,' inconsistent planning, poor communication and a failure to evaluate for impact.

According to Vearey, the link between policing and reported crime is a 'fallacy' driving a 'charade'

The enemy of an honest SAPS officer can be as banal as the organisational culture that saturates their working lives. And yet this culture, too, is partly born of unresolved and mismanaged pasts. Crudely put, red tape is a means to compel trust between colleagues where it is lacking.

Sometimes the bureaucratic and personal overlap. Vearey recounts occasions where a task team's success led to management interference. When he objected in 2002, he was suspended without pay. Such attacks followed him throughout his career. He fought on, chasing his vision of justice and running from his shadow, but at what cost? How much energy do police spend fighting internal battles or covering their backs rather than doing their jobs?

When Vearey was appointed to the rank of brigadier, a senior colleague told him he'd 'been promoted to the level of your future enemies ... They will invite you to ride in the train. And when it is in motion, they will open the doors and throw you out.'

The advice was given in the stairwells during smoke breaks because they believed colleagues had bugged their offices. The echoes of this mistrust reverberate in the corridors of SAPS power today as officers struggle to live with 'toxic masculinity of unresolved pasts.'

It's not only fellow senior managers with whom Vearey has clashed. In one instance, police leaked information to gang hitmen hired to kill him. In another, his colleagues colluded with gangsters and journalists to publish lies in the Sunday Times, which later accepted it had been duped. In 2016, after Vearey helped convict Colonel Christiaan Prinsloo for selling thousands of firearms to gangsters, he was rewarded with a demotion.

At other times, the enemies were his former MK soldiers and leaders of government. When Vearey recorded ANC MP Vytjie Mentor's statement alleging corruption involving former president Jacob Zuma, the Gupta brothers and others, a senior police leader authorised rogue operations to sabotage investigations - apparently with Zuma's backing. When Vearey pushed back, a top general allegedly said he would 'finish [him] off.' But Vearey fought on, surviving various attempts at dismissal.

When National Commissioner Khehla Sitole said in 2018 the SAPS was introducing a programme called Simunye (we are one) to address management conflicts, Vearey reflected, 'Siyinhlakanhlaka: we are divided ... there was still no unity within police management. Our spears are still stained with old blood.'

Although not covered in the book, Vearey's opponents won their greatest victory in May 2021 when he was dismissed for posting 'disrespectful' social media messages. Considering that the SAPS retains in its ranks all manner of officers found guilty of serious offences and criminality, Vearey's dismissal raises questions about SAPS commitment to accountability.

But these battles take their toll on the individuals involved, the SAPS and the communities left to fend for themselves while police wage war with each other.

South Africa's police leadership is in crisis. Although it's a good place to start, it may take more than transparency of appointments for long-serving officers to accept their shadows and let light into the 'dark water' of the SAPS, as Vearey attempts for himself with his book.