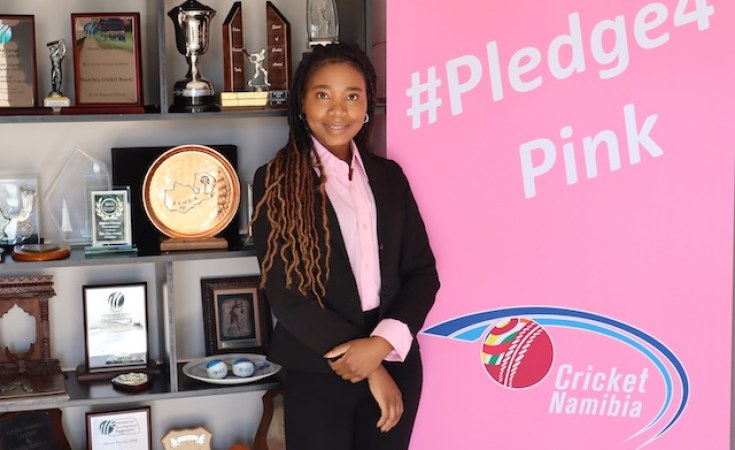 Cricket Namibia has joined forces with the Cancer Association of Namibia in the first-ever #Pledge4Pink Campaign to raise funds and awareness of cancer in Namibia.

According to a press release issued by Cricket Namibia (CN) the #Pledge4Pink Campaign will run in partnership with APS, Richelieu Namibia, Pupkewitz Motors and the MTC Windhoek Fashion Week.

"We are excited to roll out one of the biggest, innovative initiatives where various corporate entities and individuals strive for one common goal to support a cause taking over our country,"CN said in a statement.

It added that CN will host the Multiply Titans at the Wanderers Club for a Pink Series from 28 August to 1 September. This will be the first-ever PinkDay for the Namibian Eagles team where they play in a pink kit for cancer awareness.

Cricket Namibia plans inclusive programs and activities lined up as a build-up towards the official APS Pink Days such as the Local is Lekker Pink Market Day, a ball night during the MTC Windhoek Fashion Week, a dress-up in pink on Fridays and the Pupkewitz Motors Pink Golf Day.

Local is Lekker Pink Market Day will be hosted at the CCD field in Pioniers Park on 26 August where the general public dresses up in pink for a fun, engaging event that will embrace Namibian culture, and showcase local exhibits, with local performances and a game centre.

The Pink Ball Night is an elegant evening scheduled to take place on 27 August at the Windhoek Country Club that will be hosted with MTC Windhoek Fashion Week, while the #Pledge4Pink campaign will be concluded with a Pupkewitz Motors Pink Golf Day on 3 September.

Cricket Namibia called on the general public and entities to contribute towards the #Pledge4Pink Campaign by sharing resources, donating materials, being a naming partner to one of the events, assist in arranging and planning the events or sharing of social media posts.

It also thanked Officeconomix for availing resources in the arrangements of the #Pledge4Pink Campaign, Future Media for availing airtime to promote the initiative and Richelieu Namibia for being actively involved in the campaign.

Cricket Namibia challenged entities, schools, and individuals to dress up in pink at work and post on social media with the hashtag #Pledge4Pink to raise awareness of cancer in Namibia.