Ethiopia: What Do Citizens Expect From the New Parliament? 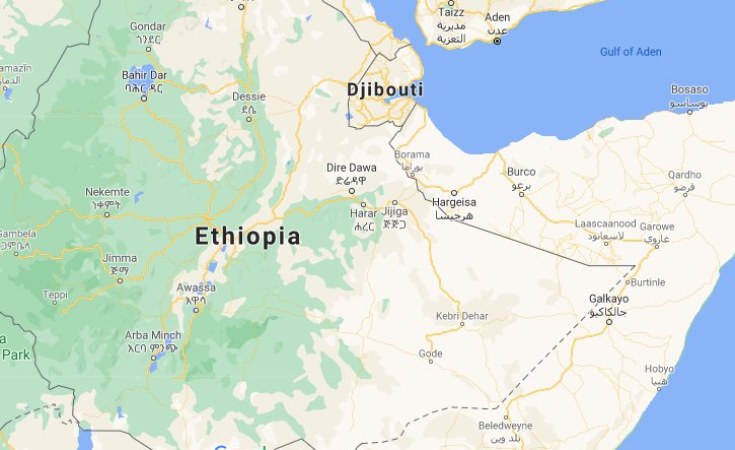 Google Maps/screenshot
A map showing the location of Ethiopia and Djibouti.
The Ethiopian Herald (Addis Ababa)
By Abdurezak Mohammed

The responsibilities of members of the House of Peoples' Representatives are set out briefly in the Constitution of the Federal Democratic Republic of Ethiopia (FDRE), Rules of Procedures and Members' Code of Conduct. Accordingly, the main functions of the House granted by the constitution are making the law, supervising the executive body, representing the electorate, and fostering parliament diplomacy.

For many years, members of the House have been criticized for failing to fulfill their constitutional mandates as required. While the people were demanding democracy, and widespread looting occurred in the country and projects were extremely delayed as well as members of the parliament (MPs) were said passive.

They have also been criticized for passing ineffective laws against the Constitution and being under the influence of the executive body and failing to fulfill its responsibility in terms of overseeing the activities of sector institutions and executive bodies. Members of the parliament are also being criticized for being loyal to their party instead of being a true representative of their electorate and discussing important national issues.

Although there has been relative freedom for parliamentarians over the past three years, members have been criticized for pursuing a biased approach rather than focusing on issues that solve national problems. Particularly, the way in which MPs have addressed the issue of attacks on civilians in various parts of the country has exposed them to criticism.

In the past years, there were widespread violations of human rights, waste of resources, and corruption in our country. But, instead of following up on these problems and getting them corrected, members of the parliament were inactive, so said commentators whom The Ethiopian Herald spoke.

Over the past six years, many events have taken place in the House. For example, former Prime Minister Hailemariam Desalegn transferred his power peacefully to Prime Minister Abiy Ahmed (PhD), and members parties of the Ethiopian Peoples' Revolutionary Democratic Front (EPRDF) have been merged into one national party - Prosperity Party (PP). But, all parliamentarians were members of one party, said Mohammed Fentaw.

Since the coming of Prime Minister Abiy Ahmed (PhD) into power in April 2018, draconian proclamations like anti-terrorism law, media law, investment law, and others have been amended, he said, adding that there are still laws that need to be amended.

Mohammed also insisted that there is a lot of work to be done to re-organize legal, justice and democratic institutions independently and strengthen them.

Tarekegn Degife for his part stated, "As we all know, over the years MPs were loyal to one party and under the influence of the executive bodies."

Although it is not enough, there has been relative freedom for parliamentarians for the past three years, Tarekegn noted.

Now, Ethiopia needs a parliament that advocates for human rights, contributes to national consensus in the country, strengthens democratic institutions, and monitors the executives, he insisted.

For his part, another commentator Alemayehu Hailu indicated that Ethiopia does not need conflict-ridden ideas. The country needs ideas that strengthen the unity of the people and bring peace and stability in the country. They have to be a key part of the national peace-building process, he added.

"As we all know, MPs are elected in each woreda (district). However, it is not appropriate to exaggerate only their local issues and underestimate others," he stated. Issues raised by the parliamentarians should be supported by solid evidence, he urged.

Sometimes, MPs were wasting their time on unnecessary ethnic issues instead of focusing on scientific and reasonable ones, he said, adding that they should be a role model for their electorates.

Considering the current situation in Ethiopia, We [Ethiopians] need visionary and patriot MPs who can formulate strong policies that can take our country out of its current predicament, said legal expert Amdegebriel Admasu, adding that the newly elected MPs must have a clear understanding of the politics of our country, the region, and the world.

As a nation, we need MPs who represent their electorate genuinely, work hard for the guarantee of rule of law in the country, oversee the executive bodies effectively, and do a lot of work in terms of parliamentary diplomacy, Amdegebriel insisted.

Wollo University Law Lecturer Dejen Yemane for his part stated that members of the parliament were issuing repressive laws like anti-terrorism, media, and civil societies organizations' laws, and others. And also, what the members of the parliament were reflecting was not the public interest that should be protected by these laws; it was the interest of a particular political party.

He further insisted that the country needs a parliament that not only makes laws but also enforces them and a council that oversees the executive bodies properly. Considering the current situation in Ethiopia, we also need a parliament that can fulfill its constitutional responsibilities, he noted.

"The MPs should act as their electorate, not as individuals. In other words, they need to be a true representative of their voters," he indicated.

Recently, a consultation forum was held at Bishoftu with the participation of senior officials of the House of Peoples' Representatives and the Secretariat office of the House.

The new parliament that will be formed following the election results should have a strong organized office in order to function effectively, said House Speaker Tagesse Chaffo.

The study on the current structure of the Secretariat Office of the House of Peoples' Representatives was presented by experts with extensive experience in the field, and the presenters said that the study explored the experience of other parliaments like India, South Africa, Botswana, and England.

According to the presenters of the study, this newly suggested structure of the Office takes into account the needs and capacity of the country, will enable the House to work effectively by modernizing itself.

According to senior officials who commented on the study, the proposed study provides an in-depth look at the work of the Secretariat Office structure and it will help to bridge the gaps in the current office structure.

It is also said that the organizational structure alone will not be effective and that human resource placement and management guidelines should be given due attention. It was agreed at the consultation forum that the council should be supported by qualified professionals.

House Speaker Tagesse Chaffo said that the House has been closely monitoring the study process, adding that the document is open for comment and it will be amended.

The staff of the Secretariat Office of the House will discuss the organizational document and gather additional resources, it was revealed.

It was to be recalled that, months ago, the Secretariat Office of the House of Peoples' Representatives signed a memorandum of understanding with the member institutions of the Parliamentary Research Network (PRN) to work cooperatively in the fields of research and other technical works through the PRN. And also, the annual parliamentary research conference was held to provide a platform for parliamentary research services to establish mutually beneficial partnerships for sharing best practices, information and knowledge; build the capacity of its members and promote evidence-based policies and legislations.

It was also said that the key objectives of the conference will be establishing linkages between researchers and legislators; strengthening the capacity of legislative researchers through exchange and sharing of best practices, knowledge, and experiences; transforming research services uptake and evidence use for decision making; building and maintaining strong network and linkages with parliamentary research services, research colleagues in other jurisdictions as well as research and policy institutions, and relevant stakeholders at national, regional, and international level; and strengthening the Parliamentary Research Network.