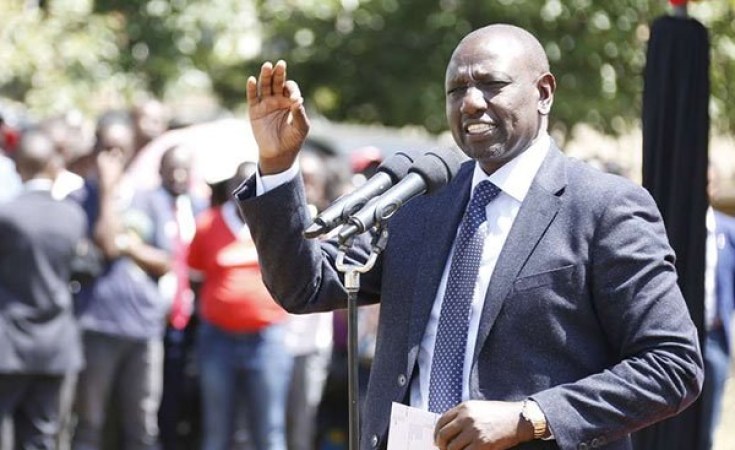 When the electoral commission announced the date for Kiambaa constituency by-election in April, Deputy President William Ruto immediately summoned all his key lieutenants from Central Kenya to his Karen residence with one agenda -- to ensure the momentum UDA party had gained after a win in a similar election in Juja was sustained.

At the back of his mind he knew it would not be a smooth sailing given that Mr Kariri Njama, whom they considered a front-runner, had rejected their overtures to defect to UDA. Another candidate had to be scouted for immediately.

Next was to engage gear two. Mr John Njuguna Wanjiku became a natural favourite but the politburo admitted he was an underdog who needed serious propping up to win. It happened he had hosted the DP in Kiambaa in February as part of preparations to run for the seat next year.

Mr Njama narrowly lost to the late MP Paul Koinange in 2017 and remained on the ground throughout the intervening period. A survey commissioned by the party, the Nation gathered, gave Mr Njama over 50 per cent support against Mr Wanjiku.

It was then decided that cohorts each comprising five Tangatanga MPs (Jubilee legislators allied to the DP) would adopt a ward and campaign there in their own style. They would furnish DP with daily reports on how the 'ground' was behaving.

From Monday to Friday they would campaign, sometimes even in the late evenings away from the media attention as they knew what was at stake.

UDA was mapping out their inadequacies and with the help of MPs Kimani Ichungwah (Kikuyu), Moses Kuria (Gatundu South), Rigathi Gachagua (Mathira), Ndindi Nyoro (Kiharu), George Kariuki (Ndia) and Murang'a Senator Irungu Kanga'ta engaged in strategic rallies under the guise of empowerment targeting voters with political messages that the win would liberate them from the government's oppressive politics.

Each of the five MPs took over the campaigns in the wards. Cainda ward was being led by Mr Kariuki, Karuri was under Mr Gachagua, Mr Nyoro (Ndenderu), Mr Ichungwa (Kihara) while Mr Kang'ata was in charge of Muchatha.

"Our brief was increasing voter turnout and ensuring the youth, who form the bulk of our supporters, show up. It helped that the people are unhappy with Uhuru for abandoning Ruto and the handshake with Mr Odinga is not popular in Central. Hustler MPs are also popular for defending Ruto," said Mr Kariuki, the Ndia MP.

During the campaigns, the MPs would only make technical appearances in Parliament to avoid being accused of absconding duty then return to Kiambaa.

The cohorts recruited mobilisers at village level whom they relied on to do door-to-door campaigns and then on weekends they would stage market visits where they interacted with traders, convincing them to vote their man. These were also buttressed by a robust online campaign for those who could not be reached on the ground.

The mobilisers were each charged with ensuring those in their area came out to vote. They were given direct access to the national secretariat and the MPs, and facilitated on Election Day to promptly communicate in case a voter was unable to make it to the polling station so that help is made available.

Another formula used by the DP's foot soldiers was vigilance during and after the polls. "Linda Kura (protecting the vote) did the final magic for us; we knew our opponents were up to mischief and we had to be extra watchful throughout the night," Gatundu South MP Moses Kuria said.

And while they may not have made physical presence in Kiambaa to drum up support for their respective candidates, Jubilee party leader Uhuru Kenyatta and his deputy Ruto were directly involved in the campaigns, leave alone the financials.

A week to the polls, Dr Ruto held a number of teleconferences with select social groups to convince them why UDA candidate Wanjiku was the best man to champion their interests.

In one such a conference, the DP engaged Karuri Bodaboda Association in a 30-minute interaction beseeching them to elect Mr Wanjiku, who he described as a 'hustler' like them and who was ready to champion their interests.

"We were delighted to have someone of his stature reach out to us without having to go through intermediaries. For that, we have no reason to let him down. He also ensured we went home happy," Mr Martin Chege, an association member, said during the interview at their working shade on Wednesday.

The shade was cluttered with posters and banners bearing Mr Wanjiku's images after those of Mr Kariri Njama of Jubilee were brought down.

A day after Mr Njama met the President at State House, Mr Kenyatta spent the better part of the day talking to party officials and opinion leaders in Kiambaa on phone, being briefed on what they were doing to retain the seat.

"There was a time the party leadership was not dealing with us through other layers of politicians. We're happy they started involving us in the programmes. I can confirm the President has himself been in touch with us," said Mucatha MCA Joseph Ngicu of Jubilee Party.

The DP's random calls to opinion leaders and his pointmen such as MP Kuria (the President's MP) and Mathira's Gachagua putting him on speaker phone to engage the people saw him keep in touch with the fan base throughout the campaigns.

The election result, they each knew, would have profound ramifications on the political landscape, including informing realignments, ahead of the General Election.

For DP, the win has cemented his stranglehold in Central, with Mr Kenyatta left gasping for breath.

Some observers are of the view that the man the President held his hands and took to his people at a time they least trusted him on accusation of leading the charge against people with Central Kenya roots in his Rift Valley bastion during the 2007/08 post-election skirmishes has managed to stage a successful takeover.

UDA made the high cost of living a key component of the campaigns, even blaming it on the handshake between the President and ODM leader Raila Odinga.

"UDA has told us that this government is working against the people and we agree. They just increased prices of basic commodities like cooking gas the other day. Why should we vote a candidate sponsored by the ruling party?" another resident posed.

When we visited Kiambaa on Election Day, the residents accused the President of paying lip service to them since he was elected.

"We see him launching projects in Nyanza yet he has never set foot here to say thank you after we voted for him. I don't remember Nyanza voting for him. Now he's leading us to ODM whose party leader he told us is a 'muguroki' (madman) in 2017)," Mr Munyua Waiyaki from Ndenderu said.

Mr Waiyaki admitted that his vote for Mr Wanjiku was largely a protest against Mr Kenyatta.

For Mr Kenyatta, the handlers felt as the Head ofState, there was need to leave some wiggle room in case his candidate loses. A Kariri Njama loss after he goes out in the campaign trail would have had the symbolism that he has lost the mountain in what his aides say would have triggered a chain reaction rendering him lame duck exactly a year to his retirement.

It would also make him lose supporters, mostly lawmakers and governors who have stuck by his side at a time the 'hustler' euphoria is sweeping across Mount Kenya.

But the DP's decision to stay back was largely informed by caution. His advisers said setting foot in Kiambaa, the president's backyard, would have been the most overt war declaration by him in recent times.

As he hits out at his boss for 'betraying him', the DP has been keen not to openly antagonise his base as this, he believes, can turn the tide to his disadvantage.

It is not the first time. The two never went to Juja, where the DP's candidate George Koimburi running on The People's Empowerment Party (PEP) headed by Mr Kuria carried the day.

In a bid to take the 'hustler' gospel to the masses, UDA campaign teams led by Mr Gachagua and Mr Kuria organised shopping jamborees in market centres during weekends.

In his bottom-up economic model, DP Ruto has never missed an opportunity to talk about his plans to empower vegetable vendors (mama mboga), a microcosm of the small and medium-sized enterprises.

And keen to protect the vote, all UDA agents were brought together in a WhatsApp group to hasten communication among them. Any incident in a polling station would be relayed to others in real-time

In the end, the Kiambaa parliamentary by-election was never about the candidates themselves, the leading two --Mr Wanjiku and Mr Njama -- became pawns in a chess game of high octane succession politics.