Ethiopia's PM Abiy Vows to Crush TPLF 'Once and for All' 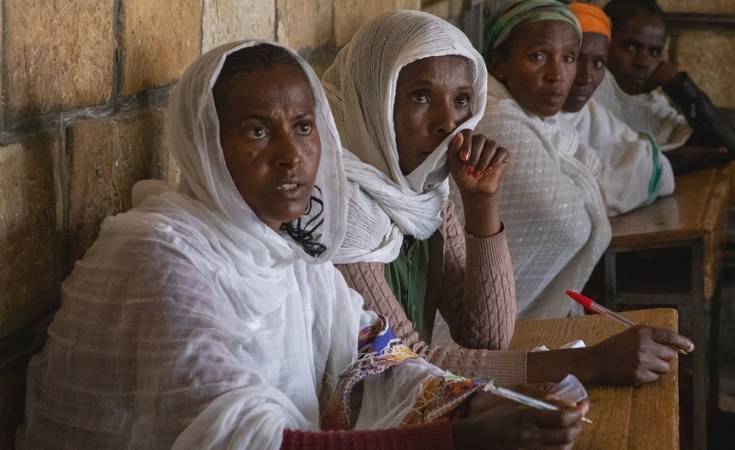 Zerihun Sewunet/UNICEF
Displaced people in Adigrat town, in the Tigray region of northern Ethiopia.
The Nation (Nairobi)
By Tesfa-Alem Tekle

Ethiopian Prime Minister Abiy Ahmed on Sunday vowed to wipe out the Tigray People's Liberation Front (TPLF), a group that was once the country's ruling party, but which Addis Ababa now considers a terrorist movement.

Using alarming words like "weeds", "cancer" and "disease" to refer to the group, the Ethiopian leader seemed to confirm the final collapse of the unilateral ceasefire he had declared two weeks ago, which was meant to aid humanitarian access in the region now controlled by fighters allied to TPLF.

"The enemy we are facing is Ethiopia's cancer," Abiy said in a tweet referring to TPLF, led by Debretsion Gebremichael, whom Addis Ababa has proscribed alongside other senior Tigrayan leaders.

He said TPLF probably is the first and the only group in Ethiopia's history that is trying to disintegrate Ethiopia.

"But certainly the junta will be uprooted in a way it will not regrow again... This will happen if we all rise to remove the Emboch," he added.

The Nobel peace laureate was referring to a water hyacinth, locally known as Emboch, which has invaded Lake Tana and which Ethiopia has not yet managed to get rid of despite fighting it for over 10 years.

But given the context of the war against TPLF, he may have been referring to crushing the rebel group once and for all.

"A large offensive means the conflict will not anymore be confined in the region. The intended move is so very dangerous and it could probably be the beginning journey towards the country's disintegration," he added.

After the collapse of the ceasefire, Addis Ababa accused TPLF of using child soldiers, something the group denied in a lengthy statement on Sunday morning. But now Addis Ababa is drafting supportive militia from regions across the country to join the Amhara fighters who had long sided with the Ethiopia National Defence Forces. Forces from Afar, Oromia, Somali region as well as the Southern Nations, Nationalities and People's (SNNP) region had all been sent to Tigray to combat the TPLF and its allied militia.

Previously, some analysts had warned that Ethiopia might be the next Yugoslavia, referring to the disintegration of the once European country whose former republics split into independent states.

Sunday's statement, the second in a week, is the strongest made by the prime minister since Tigray's capital Mekelle was retaken from Ethiopia's army on June 28.

The statement by the Ethiopian leader could clearly be seen as an open declaration of war against TPLF.

He said Ethiopia National Defence Forces (ENDF) and regional forces are taking positions on the frontlines.

"We have strict plans on what, why, how, where and when to do it and enemies and friends will see the results very soon"

"The government will do whatever is necessary to defend these attacks being carried out by our internal and external enemies" he then said.

However, it is not clear which external enemies he was referring to, though Egypt and Sudan are being seen as potential threats to security over Ethiopia's controversial dam.

Regional states are also deploying forces to Amhara region to take on TPLF in the declared the second phase of war on Tigray.

Sidama, Oromia, SNNP and Afar regions have sent their forces to the frontline.

Other regions such as Somali and Gambela have also announced they will deploy their regional troops.

Metta-Alem Sinishaw, a political analyst on Ethiopia and East Africa, says the resumption of conflict marks the nationalisation and internalisation of the Ethiopian elite conflict.

"However, the conflict is not any more TPLF vs Abiy or TPLF vs Amhara region. The active participation of several regional forces has unexpectedly transformed the conflict into at least a national front against TPLF. This will have serious political implication far beyond the military campaign."

TPLF rebels have carried out operations against pro-government troops in neighbouring Afar region, a spokesman said Sunday, opening a new front in the widening eight-month conflict.

"We took those actions to ensure those forces are sent back to Oromia, and we have managed to do that," Getachew said, adding that there were some casualties but he could not provide figures.

"Our action was very limited to dispersing the peasant militia from Oromia that was mostly press-ganged into fighting the useless war."