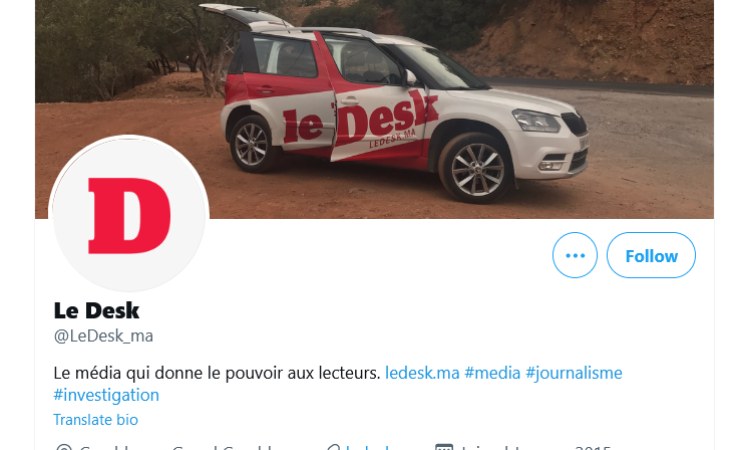 @LeDesk_ma / Twitter
The Twitter page of Le Desk, Moroccan journalist Omar Radi was one of the founders of the publication.
Amnesty International (London)
press release

Responding to today's sentencing of Moroccan journalist and government critic Omar Radi to six years in prison after a trial marred by blatant breaches of due process in relation to charges of espionage and rape, Amna Guellali, Amnesty International's Middle East and North Africa Deputy Director, said:

"Before his arrest Omar Radi was harassed by the authorities because of his brave journalistic work criticising human rights violations and exposing corruption.

"Ever since his trial began it has been marred by flaws.

"He has been deprived of the right to prepare a proper defence, he and his legal team were denied the right to access some of the evidence against him and all requests to summon defence witnesses in the cases against him were denied. He has also been held in solitary confinement for nearly a year.

"Condemning someone to six years in prison after such flawed proceedings is not justice.

"The authorities must urgently grant him a fair retrial in line with international standards."

Omar Radi is one of the founders of Le Desk, an independent Moroccan news website publishing content critical of the authorities. His journalism has focused on politics and corruption by the authorities.

On 29 July 2020, Radi was arrested and charged with "harming the internal and external security of Morocco" and of receiving funds from sources "linked to foreign intelligence agencies". Amnesty considers these trumped-up charges as they relate to research grants in the context of a journalism fellowship and freelance consultancies, both protected by his right to freedom of expression.

Radi was also charged with "rape" and "indecent assault against a female" after a former Le Desk colleague alleged he assaulted her. He has denied the accusation. It is vital for all sexual assault allegations to be properly investigated and for perpetrators of such assaults to be brought to justice. Yet regardless of how serious the charges against him are, the authorities must ensure he is treated fairly and is granted a fair trial.

In June 2020, an Amnesty report revealed that Omar Radi had been targeted by the Moroccan authorities using spyware produced by the Israeli company NSO Group. Following this, the Moroccan authorities launched a smear campaign against Amnesty, attempting to discredit the organisation's findings and distract from the unlawful surveillance of human rights defenders and journalists in the country. The indictment in both the espionage and rape cases against Radi confirm that the authorities had had the journalist under surveillance from late December 2017.