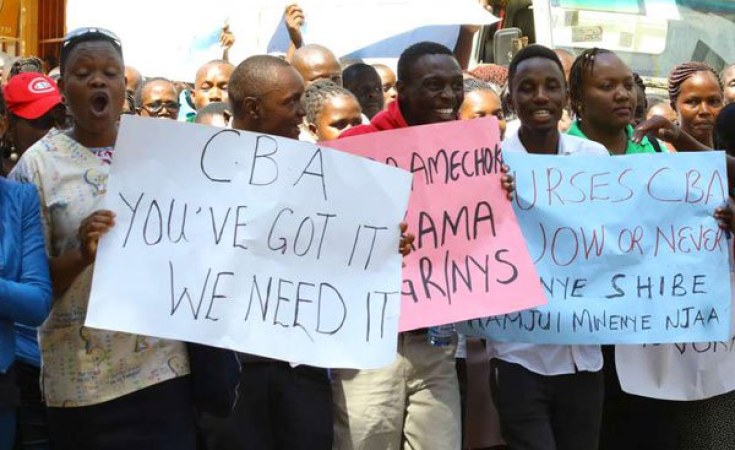 Health workers in Mombasa County have issued a strike notice due to unresolved issues with their employer, including non-remittance of loan deductions.

The more than 1,000 health workers, under the Kenya Union of Clinical Officers (Kuco) and the Kenya National Union of Nurses (KNUN), accused the county government of non-remittance of loan deductions.

"When we ended a strike that lasted over three months on February 2, we agreed that all issues around delayed salaries, promotions, statutory deductions, among others, would be resolved. However, our members have been left on their own as far as salaries are concerned since the county has not remitted loan deductions, prompting banks to withhold salaries," said Kuco's Mombasa secretary-general Franklin Makanga.

Mr Makanga further accused the county government of being non-committal in resolving their grievances, regardless of set deadlines.

He said the county was supposed to finalise an agreement with all unions representing nurses, doctors, clinical officers, laboratory technicians and other cadres by June 30.

"That has not been the case. It is on this backdrop that we wish to advise Governor Hassan Joho to take responsibility for the incompetence of his administration and for failing to honour its part in relation to the return-to-work formula," he told the Nation.

He said the unions have already issued a strike notice to their employer.

"We are suffering as frontline health workers. Our members are getting infected with the virus while working but they cannot access health services because the insurance that covers us has not received remitted funds."

In February, Mombasa's health workers, including nurses, clinical officers and laboratory technicians called off a strike after reaching an agreement with their employer.

The administration assured residents that the county would avert a health crisis by negotiating in advance with the health workers, who now want Governor Joho to stamp authority.

"We have a meeting on Thursday this week. If they won't address our concerns, we will strike," said KNUN's Mombasa official Peter Maroko.

The strike will affect the county's fight against the Covid-19 pandemic amid a spike in the number of infections.

As of July 16, the county had recorded 91 cases, with Mvita sub-county leading with 37 and Nyali reporting 19, Kisauni 14, Jomvu nine, Changamwe five and Likoni three.

Since March 22 last year, when the first case was recorded in Mombasa, a total of 12,788 cases, including 255 deaths, have been confirmed.