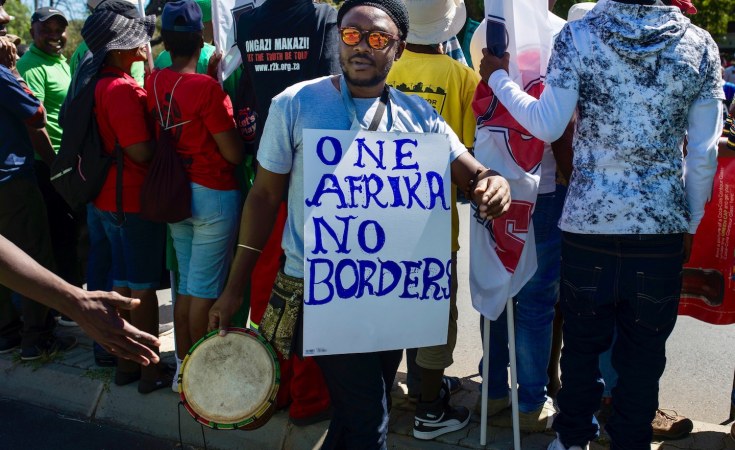 Ihsaan Haffejee/GroundUp
A man with a sign calling for the abolition of borders on the African continent is seen during the anti-xenophobia march in Johannesburg (file photo).
GroundUp (Cape Town)
By Tariro Washinyira

Matric children of immigrants born in South Africa also battle to get IDs so that they can enrol in tertiary education, but Home Affairs is trying to fix this.

Children of African immigrants to South Africa experience prejudice and victimisation from their peers at certain schools, some told a virtual meeting against xenophobia in schools on Saturday.

Human rights organisation Africa Unite hosted the event attended by 20 representatives from schools in Gauteng, KwaZulu-Natal, and the Western Cape. The meeting aimed to enhance cohesion between local and immigrant learners and build empathy, unity, and peace. It included testimonies from immigrant learners and poems read by South African learners.

Shalom, whose parents were Zimbabwean, (her mother died when Shalom was two years old) goes to school in Mitchells Plain. "Even though I can speak both Xhosa and English, it is hard sitting in the class and having to deal with being mocked ... to apologise for being myself."

"It was difficult to try not to be South African at home and at the same time try not to be too Zimbabwean at school. I felt like I was losing myself, not knowing who I am."

She said she had been shaken by a conversation among her classmates who said that foreigners should leave South Africa. "I had to constantly look at the door when my father left for work and pray that nothing happens to me."

Farayi (we are only using first names), also from Zimbabwe, enrolled in school in Bloekombos, said she learned to communicate in Xhosa, but she was "still a target". "I feel like an outsider most of the time. If I had an option to leave I would definitely leave, that is how deeply I feel."

Teachers too can be treated disrespectfully and made fun of if they are African immigrants, said Lindiwe, a grade 10 student at a Catholic school in Cape Town.

GroundUp contacted the head of her school who said she was aware of an incident last year in April. "There was a teacher from Zimbabwe and children had been making fun of her accent. This was brought to my attention and we dealt with the situation, making it absolutely clear that that is completely unacceptable, and that kind of behaviour will not be tolerated."

"All the girls were made to apologise; most importantly they were all sanctioned and given a level of punishment as part of their learning process," she said.

South African-born children of immigrants said they had also been struggling to enrol in tertiary education as Home Affairs had left them in limbo under the Covid-19 lockdown. Home Affairs has sought to remedy this through online applications.

She started a petition on 20 June calling on Home Affairs to make provision for refugee children born in South Africa to apply for identity documents. The petition garnered 25,000 signatures.

Subsequently, Home Affairs has issued a circular invitation "to dependants of refugees who are in matric or wish to further studies or have an employment offer, to apply for IDs or travel documents" online.

Spokesperson of the Minister of Home Affairs Siya Qoza said this was circulated on 8 July. Dependants of refugees should send an email request to enabledocument.asm@dha.gov.za with supporting documents such as letter from school or letter of acknowledgement or admission from a institution of higher learning.