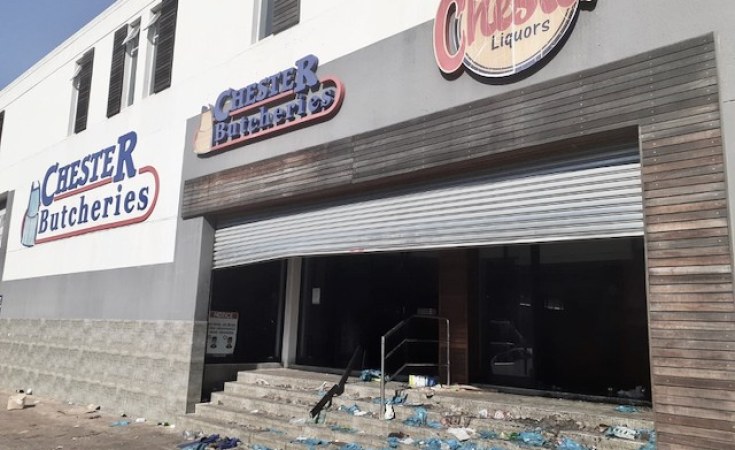 Nokulunga Majola / GroundUp
Residents were left without access to basic necessities such as bread and milk after shopping areas such as this one in Pinetown, Durban, were looted (file photo)
GroundUp (Cape Town)
By Nokulunga Majola

"Some of us have been affected by the riots and looting but we continue to assist and help the community regardless of race or religion because we are all human beings," says Muslim organisation

At least 280 people are homeless following a fire that ripped through Briardene informal settlement in Durban last week.

Due to unrest and looting last week, most government emergency and aid services have been overwhelmed.

Many Briardene residents have been sleeping outside with the little they managed to save from the fire.

The Humanitarian Development Alliance SA (HUDA SA), Muslims for Humanity as well as Doctors without Borders have donated hundreds of basic items to the affected families.

About 200 blankets with 500 milk and bread packages have been delivered to the community of Briardene informal settlement, Durban, following a devastating fire that left over 280 people homeless.

It was one of 914 fires across the eThekwini Municipality during the looting and unrest last week. Of these, nine occurred at informal settlements, according to municipal spokesperson Mandla Nsele. The City's Disaster Management Unit could only visit the settlement on Saturday, three days after the fire.

As emergency and aid services were stretched thinly last week, it resulted in delayed assistance to communities like Briardene. By Tuesday morning, most of the families affected by the fire had still not been able to rebuild their homes nearly a week later. Residents say they are waiting for the City to help with material for their homes.

"We have people on chronic medication, children who are sick but could not go to the clinic or get any medical assistance, because shops and pharmacies were closed. The fire couldn't have happened at a worse time," said resident Zanele Zikhali. She said they don't know when they would be able to rebuild. "Even if we want to rebuild, how are going to do it because we don't have any material, we haven't done anything we are just sitting here and waiting," she said. Shack dweller movement Abahlali BaseMjondolo (ABM) spokesperson Thapelo Mohapi, whose home was also gutted on Wednesday, said the only assistance they have received was from community leaders, the Muslim community who provided them with food and blankets, and other branches of ABM. "The City Disaster Management Unit came and took down the names of the people that were affected. I'm disappointed with what has been happening. I heard that a plane landed at King Shaka International Airport with relief packages for affected communities but we haven't received anything. If it wasn't for community leaders and other people who have come in our aid, I don't know what would have happened to us," said Mohapi.

He said their pleas for assistance were answered by the Humanitarian Development Alliance SA (HUDA SA) and Muslims for Humanity who responded with the donated items.

"We believe it is our duty and responsibility to assist the community and we will continue to do so," said Ismat Mahomed of HUDA SA.

"Some of us have been affected by the riots and looting but we continue to assist and help the community regardless of race or religion because we are all human beings. Muslims for Humanity has donated bread, milk and other food hampers to affected areas since the riots began over a week ago."

Doctors Without Borders also donated a tent on Monday for people who had been sleeping outside for days. A second tent was donated by ABahlali BaseMjondolo

Jonathan Whittall, from Doctors Without Borders, visited the Brairdene informal settlement over the weekend. "We donated a tent as a temporary shelter and we will also donate blankets and other basic needs. We will also be providing medical assistance to people who need it," said Whittall.

He said they also visited hospitals and healthcare centres to assess the situation and things are stabilising even though there is a backlog of people collecting their chronic medication.

Ward 36 Councillor Shontel de Boer (DA) said that until recently she was struggling for days to get hold of the City's Disaster Management. "I told them people need building material, food and shelter. I have asked for someone to help with temporary shelter even though it won't accommodate everyone.

"The community of Durban North is always willing to help but at the moment with everything that has been happening people are also worried about their own food security," said De Boer.

The City in a statement said it was resuming services after it was suspended due to unrest. "Fixing of broken water and sanitation infrastructure has started, while it will take a little longer in areas where there was major damage. Technicians are working around the clock to restore water supply to all areas as soon as possible. The water and sanitation call centre is still not operational," read the statement.