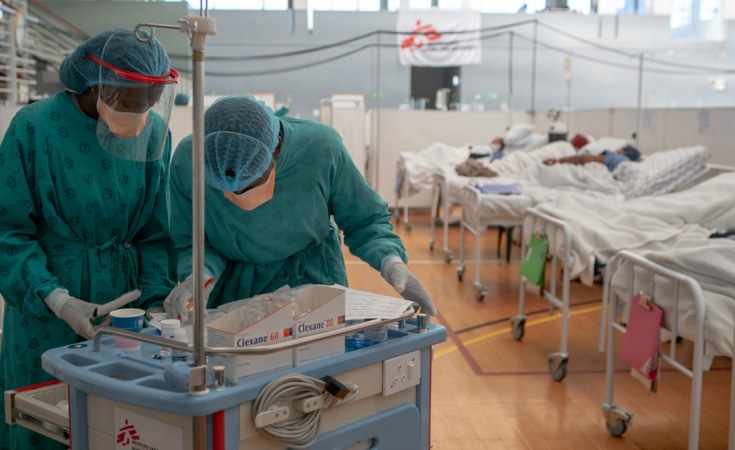 Rowan Pybus/MSF
From the community, for the community. To meet the staffing requirements of the Khayelitsha Field Hospital, MSF hired over 50 people, including doctors, nurses and support staff. Many of the staff were Khayelitsha residents.
Agencia de Informacao de Mocambique (Maputo)

Maputo — The third wave of the Covid-19 pandemic is putting increasing strains on the capacity of Mozambican hospitals, the Deputy National Director of Public Health, Benigna Matsinhe, warned on Monday.

Speaking at a Maputo press conference, she said that Maputo city has 583 intensive care beds for Covid-19 patients, of which 334 (57 per cent) are currently occupied. The situation is much worse in Maputo province (essentially the city of Matola), which has 42 patients hospitalised but only 40 appropriate beds.

In the centre of the country, in Sofala province, 126 beds are available, of which 44 (35 per cent) are occupied, while in Tete. 22 of the available 70 beds are occupied - an occupation rate of 31 per cent.

Matsinhe said the situation is already bad "and we could witness a serious situation in the coming month of August", unless "collective action is taken to block the current speed of the pandemic in our country".

In the first 19 days of July, Matsinhe added, there were 24,381 new cases of Covid-19, 1,132 new hospitalisations and 260 deaths. These figures are much higher than those recorded in an equivalent period at the start of the second wave of the disease, when there had been 9,628 new cases, 419 hospitalisations, and 87 deaths. Comparing the two periods, the number of new cases had increased by 153.2 per cent, of hospitalizations by 170.2 per cent, and deaths by 198.9 per cent.

Matsinhe reported a further 20 Covid-19 deaths in the previous 24 hours - 12 women and eight men, all Mozambican citizens, and aged between 15 and 84. 12 of the deaths occurred in Maputo, five in Matola, two in Sofala and one in Gaza. The total number of Covid-19 deaths in Mozambique now stands at 1,138. Of these deaths, 260 (almost 23 per cent) took place this month.

2.024 of the tests gave negative results, and 1,373 people tested positive for the coronavirus. These figures pushed the total number of Covid-19 cases diagnosed in Mozambique to date over the 100,000 mark, to 100,875.

Most of Monday's positive cases were from Maputo city (570) and Maputo province (447). Maputo city and province accounted for 74 per cent of the cases. There were also 198 cases from Inhambane, 41 from Manica, 31 from Zambezia, 24 from Gaza, 22 from Nampula, 21 from Tete, 13 from Niassa and four from Cabo Delgado. None of the 15 people tested in Sofala proved positive.

The national positivity rate (the proportion of those tested found to be infected with the virus) on Monday was an alarming 40.4 per cent, much higher than the rates in recent days (34.5 per cent on Sunday, 35.5 per cent on Saturday, 29.7 per cent on Friday, and 28.3 per cent on Thursday).

Because of the 20 deaths, the number of patients hospitalised on Monday was the same as on Sunday - 481. Of these, 334 (69.4 per cent) were in Maputo. There were also 44 patients in Sofala, 42 in Matola, 22 in Tete, 11 in Inhambane, eight in Gaza, eight in Manica, seven in Zambezia, three in Nampula, and two in Niassa. Cabo Delgado remained the only province where no Covid-19 patients were hospitalised.

Matsinhe described the clinical state of 161 as "moderate". 296 are seriously ill and 24 are in critical condition. 403 are receiving supplementary oxygen and 24 are on ventilators in intensive care units.

Matsinhe also announced that 123 people were declared fully recovered from Covid-19 on Monday (79 in Maputo province, 26 in Inhambane and 18 in Zambezia). This brings the total number of recoveries to 76,839, which is 76.2 per cent of all those ever diagnosed with Covid-19 in Mozambique.