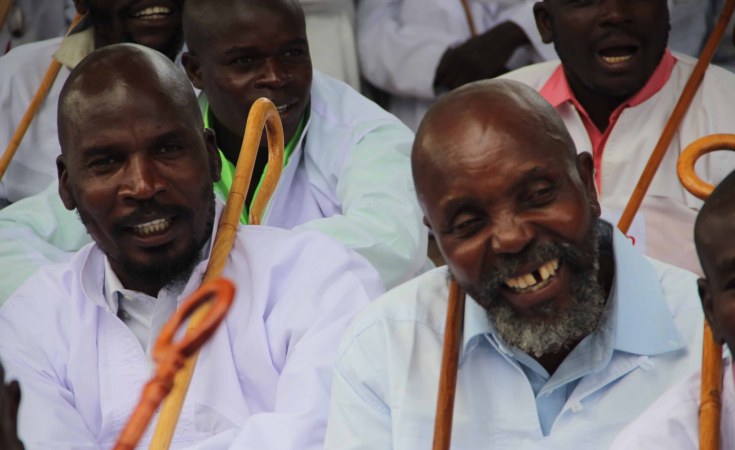 Lovejoy Mutongwiza/263Chat
Members of the Johane Marange Apostolic Sect follow proceedings during the church' annual Passover Meeting at the shrine in Marange (file photo).
The Herald (Harare)
By Roselyne Sachiti

When 56-year old Mazvita Mutiza (not real name) died three weeks ago, her loved ones converged at her Glen View home in Harare to pay their last respects.

Described as a unifier by those who knew her, Mutiza's funeral wake was no different.

For two days, her loved ones camped in their numbers at her residence before moving to their rural home in Gutu.

Word was that she lost her battle to diabetes, yet the post mortem results later showed she had Covid-19. During the funeral wake, the home was never disinfected and there was no social distancing, people hugged and embraced as they mourned.

They also viewed her body.

The following week, Mutiza's mother fell ill and also succumbed to Covid-19, her niece and cousin who were at her funeral also died of Covid-19 the same week.

Their funerals were also attended by many people.

When they thought they had buried enough people, four other family members who attended Mutiza's mother's funeral also succumbed to the virus with several others testing positive.

In total, eight people who attended the two funerals died from Covid-19.

"We are still in shock," said Mutiza's son, Pardon.

In Zimbabwe, funerals have been singled out as super spreaders of the novel virus.

Government put out guidelines allowing not more than 30 people to attend a funeral as a way of reducing transmission, because of varying reasons, people are defying this.

In January this year, Government also put restrictions on movement of Covid-19 related deaths, saying police would only clear body movements for burial straight from a funeral parlour/hospital mortuary to the burial site.

Covid-19 community deaths, which are only detected later when people would have already gathered for days to bury a loved one or having already dispersed after burial, are now worrying and possibly fuelling the spread.

The tradition of body viewing is also exposing people to the virus.

In rural areas, Village Health Workers (VHW) have been on the frontline of educating communities on safety when at funerals.

"The majority of people in the rural areas continue to follow the African cultural traditions and practices of mourning and burying the dead despite the risk of infection from the highly virulent Delta variant that has resulted in an increase in new Covid-19 cases, hospitalisation and deaths," said Mr Rusike.

He said it was important that the infection, prevention and control measures at funeral gatherings were tightened in order to reduce community transmission as funerals have become the super spreaders with dire consequences to the population.

"Family members, relatives and friends should consider other options to mourn and pay their respects to the departed instead of physically attending the funeral, avoid touching of hands and embracing as a way of consoling the mourners. They should keep their masks on when singing or dancing at the funerals," Mr Rusike suggested.

"VHWs should communicate the infection prevention and control measures on funeral gatherings to community members to reduce fear and stigmatisation," he noted.

According to Mr Rusike, it is important that all community deaths that are suspected to be Covid-19 related are reported to the police and the burials should be supervised by health professionals as per the WHO recommended guidelines.

Nyaradzo Funeral Group chief executive officer, Mr Phillip Mataranyika, said under normal circumstances (before Covid-19) and current situation comparison, the number of funerals his organisation handles has more than doubled. He said the current pandemic had seen demand for their services rising to unprecedented levels.

This demands the full deployment of available capacity.

"Nyaradzo has managed to build formidable logistical muscle over the years, with an operations fleet of more than 500 vehicles," said Mr Mataranyika.

"Over the past years, we have made significant investment in infrastructure and equipment in order to deliver a seamless and efficient service to our valued customers in their time of need," Mr Mataranyika revealed.

This built capacity, he explained, has come in handy in these most difficult of circumstances.

"Once the first and second waves came and went, and talk of a third was everywhere, we redoubled our efforts to prepare for it given our position as the largest end of life solutions provider," said Mr Mataranyika.

"The third wave is here and wreaking havoc in our lives every day," he explained.

While the end of life solutions industry in general is currently facing various capacity constraints due to increased mortality as a result of the pandemic, Mr Mataranyika said they have put in place a raft of measures to position themselves to better serve clients.

"One of our core values and operational philosophies as a business is to strive to meet our challenges head on, and continue to provide a seamless service in spite of them. To that end, Covid-19 pandemic has moved us to adopt the following quick-win interventions," he pointed out.

To cope with the challenge, Mr Mataranyika revealed that they have purchased additional vehicles to boost their existing fleet.

He said they have also increased mortuary storage capacity by more than 100 percent in the greater Harare area, and also employed more funeral services staff.

Mr Mataranyika said they have a dedicated Wellness Team attending to staff and their families.

In this time of Covid-19, the situation is harder for the men and women who walk the last steps with a deceased one.

Such challenges call for home based solutions and innovations.

"We have import-substituted on personal protective equipment (PPE), by making disinfectant, sanitisers as well as HAZMAT suits internally within the Nyaradzo Group," he said.

Mr Mataranyika pointed out the importance of a strong referral system, saying they are working with key government departments such as the Pathology Services, Registrar General and ZRP to help shorten removal from place of death and burial turnaround times.

"We urge all government arms in other districts across the country to partner with funeral service providers in the same manner," he said. "We have some who have not come on board in the process, hence delaying the laying to rest of loved ones."

Mr Mataranyika applauded the government's tireless efforts towards the fight against the Covid-19 pandemic.

"We support every initiative that various arms of government have taken since the beginning of the virus," he said. "We remain supportive of all national initiatives that the President, the Minister of Health and Child Care and various arms of government continue to implement, including raising awareness campaigns as well as the vaccination drive."

Mr Mataranyika implored on redoubling efforts for the clear articulation and publication of Covid-19 protocols around funerals to ensure that bereaved families are fully informed on the need to limit numbers, and this can be enforced through traditional leaders in the villages.

"There is also a need to expedite the issuance of burial orders, which speaks to the need to add resources in that department," he said. "Furthermore, it may be worthwhile to consider and support additional working hours for the critical staff in such key departments as the government laboratory and related functions."

Mr Mataranyika pointed out the need for road blocks to leave express lanes for ambulances, hearses, buses and trucks conducting funeral services in order not to further delay teams that are involved from body removal to burials in such trying times.

"Our customers and the general public also have a key role to play in reducing the spread of the deadly virus. We urge them to follow the expert advice of our staff when conducting funerals," he said.

This, according to Mr Mataranyika, includes abstaining from traditional hand shaking during funerals, holding night vigils in poorly ventilated homes during the pandemic and unsupervised food preparation in violation of public health protocols.