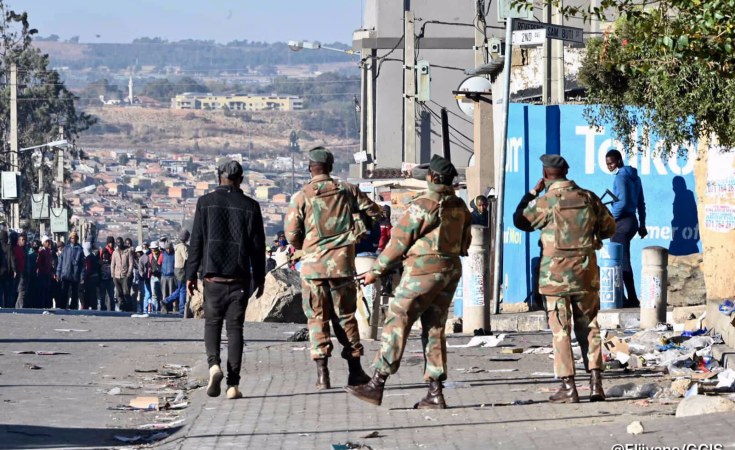 @SANDF_ZA / Twitter
Members of the South African Defence Force on the ground in Alexandra on July 13, 2021.
Daily Maverick (Johannesburg)
analysis By Rebecca Davis

Former president Jacob Zuma's stint outside prison to attend the funeral of his brother was without incident, authorities confirmed on Thursday afternoon. The situation in KwaZulu-Natal and Gauteng now remains stable - while the death toll from the recent looting has reached 337.

Thursday brought a few hours of freedom for former president Jacob Zuma, who was permitted to leave the Estcourt Correctional Centre to attend his brother Michael's funeral.

As reported by Daily Maverick earlier in the day, Zuma was accompanied by a convoy of vehicles to the Nkandla funeral, which he had been granted permission to attend on compassionate grounds.

Although there had been concerns that Zuma's supporters might try to prevent him from returning to prison, Minister in the Presidency Khumbudzo Ntshavheni said at a 4.30pm press briefing that he had already returned without incident. There were no reports of unrest related to Michael Zuma's funeral or Jacob Zuma's appearance at it.

Ntshavheni said that Zuma had been accompanied by "correctional officers supported by law enforcement agencies".

At the press briefing, Ntshavheni faced tough questioning from journalists about the scant and sometimes contradictory information given by the government relating to the recent unrest.

The minister announced that...

Previous Story
Govt Must Investigate Deaths During Riots - Amnesty International
Next Story
Violence Was an Uprising of Elites, Not of the People

Violence Was an Uprising of Elites, Not of the People