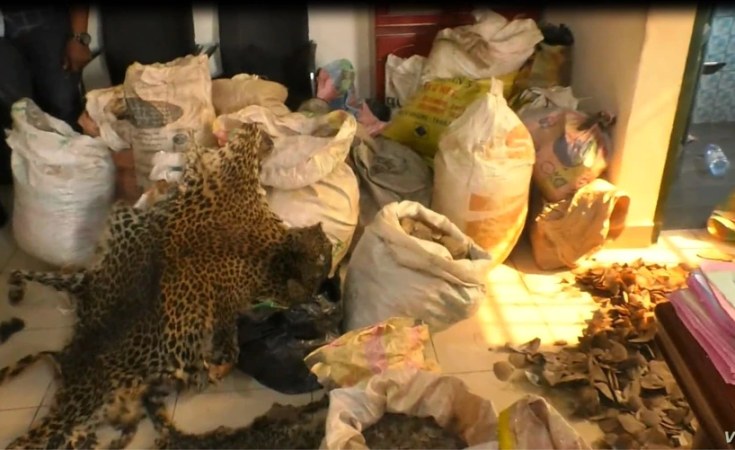 Yaounde, Cameroon — Cameroonian police say they have for the first time during the pandemic seized parts of an estimated 2,000 pangolins poached in Cameroon and neighboring Equatorial Guinea and Gabon. Police say travel restrictions had slowed trafficking of the endangered anteater to Asia, where its meat is considered a delicacy and the scales are used in traditional medicine.

At least 12 bags of Pangolin scales and leopard skin are in a police warehouse at Nlonkak, a neighborhood in Cameroon's capital, Yaounde.

Claude Mboutou Abessolo, the ranking officer at the police station says the Pangolin scales and leopard skin were seized from traffickers in Yaounde this week.

Abessolo says the traffickers were arrested while preparing to transfer the scales and animal skin to Cameroon's neighbor, Nigeria.

Abessolo did not say how many people have been arrested but said the youngest among the traffickers is 24 years old. He said some of the pangolin scales and leopard skins are either hidden in Cameroon or are being illegally shipped to Nigeria, from where they will be smuggled to Asian countries especially China.

The police said the operation was supported by Cameroon's Forestry and Wildlife Ministry and the Last Great Ape, a conservation group.

The group's vice president, Eric Kabah Tah, says close to 2,000 pangolins have been illegally killed in Cameroon in the past 16 months. Tah says the scales are hidden in houses and in the bush. He says with COVID-19 travel restrictions over and police control relaxed, traffickers are struggling to smuggle pangolin scales out of Cameroon, Gabon and Equatorial Guinea.

"Wildlife traffickers came up to bring problems due to the restrain in mobility because of the COVID-19 pandemic, but right now we are seeing a remobilization, we are seeing more and more traffickers in pangolin scales. We are witnessing pangolin scales leaving Cameroon and other central African countries and moving over to Nigeria where it is exported to Asian countries."

Tah said villagers in Cameroon who lost their jobs or whose agricultural work took a nosedive due to COVID-19 are selling pangolins to traffickers, who kill the animals for their scales.

Harouna Nyandji Mgbatou is a senior government official, a division officer in Yaounde's first district, where Nlonkak is. He says the government will make sure those who help traffickers are prosecuted.

He says Cameroonians should report traffickers and reduce poaching. He says pangolins are protected to maintain a balanced ecosystem and save humans and the forest from environmental degradation. Mgbatou says Cameroon's government will not spare anyone caught selling or helping to sell pangolin scales.

According to Cameroonian wildlife law, anyone found in possession of pangolin scales or parts is considered to have killed the anteater and is liable to prison time of one to three years and or a payment of up to $ 20,000.

Last year, Pangolin scales were removed from the list of ingredients approved for use in traditional Chinese medicine. Animal protection groups said the move was a key step in stamping out trade in pangolins, the world's most trafficked mammal.

Last Great Ape and Cameroon's government say the effort by Chinese authorities has not stopped the slaughter of pangolins in the country.