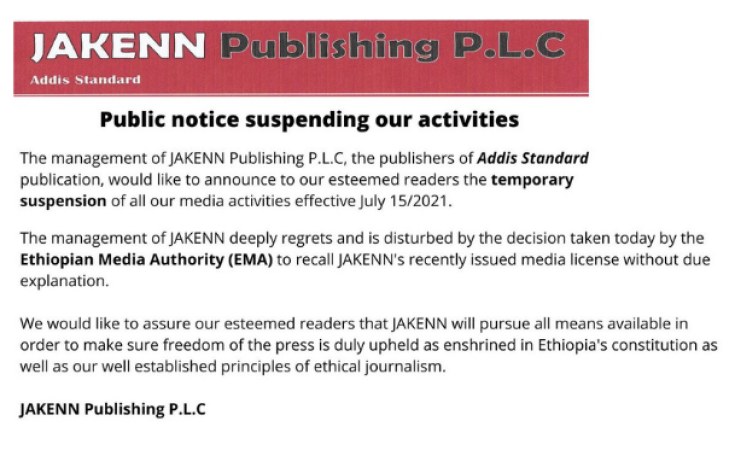 The Ethiopia government on Wednesday reinstated the licence of private news website Addis Standard after what the Media Authority said was addressing "areas of concern" in their coverage.

The developments came following pressure from lobbyists who argued that Ethiopia was trying to impose a narrative on independent media on how to cover the conflict in Tigray, whose fighting resumed this week as regional militia assembled to fight.

A statement issued by the Authority said the two sides had held talks after which the publisher, Jakenn Publishing Plc, reportedly offered to report within the law.

"They have also further assured us that the areas of concern that were observed regarding the usage of certain terms were only an oversight in the course of the editorial process," the Ethiopia Media Authority said.

"Therefore, having come to an understanding regarding past errors and based on their pledge to operate with adherence to the law going forward, we have decided to reinstate their operational licence."

The firm, however, suggested in a statement that the Authority had erred in suspending a licence for online publications which was not its mandate.

"The mandate to suspend licenses of print and broadcast media lays with the EMA board. This will only be activated according to Part V (articles 75-82) of the proclamation. Addis Standard online holds a registration, not a license, for online media from EMA and as such is not subject to the revocation of licenses under this proclamation," it said.

"The mandate for impounding or injunction over a content to be transmitted by broadcast and print media lies with a Federal or regional public prosecutor if only a clear and imminent danger exists... As such, EMA does not have the mandate to impound media over content it perceives to endanger national security."

The website landed in trouble last week after reportedly continuing with terminology the Ethiopian government was uncomfortable with when reporting on the ongoing Tigray conflict. Authorities in Addis have banned labelling of the Tigray People's Liberation Front (TPLF) fighters as Tigray Defence Forces, arguing that this depicted the group as a sovereign army. They also banned labelling of TPLF leaders as the government of Tigray.

Ethiopia has officially proscribed TPLF as a terror group.

After eight months of war, Ethiopia had last month declared unilateral ceasefire, after thousands of its troops were captured by the TPLF. Officially, Ethiopia said it was allowing humanitarian access to Tigray. It has since all but cancelled the ceasefire and mobilised regional militia to support the fight against TPLF.

The reshuffle also saw several other generals and senior military officers assigned by the regional administration to lead various security and intelligence posts.

Since last week, TPLF rebels have been claiming major military gains over operations they carried out in southern and Western Tigray region.

The Tigrayan rebel forces, deemed by Addis Ababa as terrorists, regained Alamata, the biggest city in the disputed territories of South Tigray, without any stiff resistance and after a large Amhara militia unit withdrew from the city, located south of Korem.

The two cities, Korem and Alamata, were under control of Amhara special and militia forces.

After the two cities fell to the hands of TPLF forces, Prime Minister Abiy Ahmed, who came under pressure for withdrawing the army from Tigray, then vowed to repel these fresh offensives.

TPLF forces have kept advancing deeper toward the Amhara region to retake disputed towns such as Wolkait Tegede and Setit Humera in a bid to create a buffer zone but also to open up corridors to Sudan to get access for supplies.

The federal government is having difficulties to supply its own forces and has been relying on regional forces to battle Tigray forces.

As Ethiopia and Tigray Face Tough Options, the West Needs to Be Even-Handed