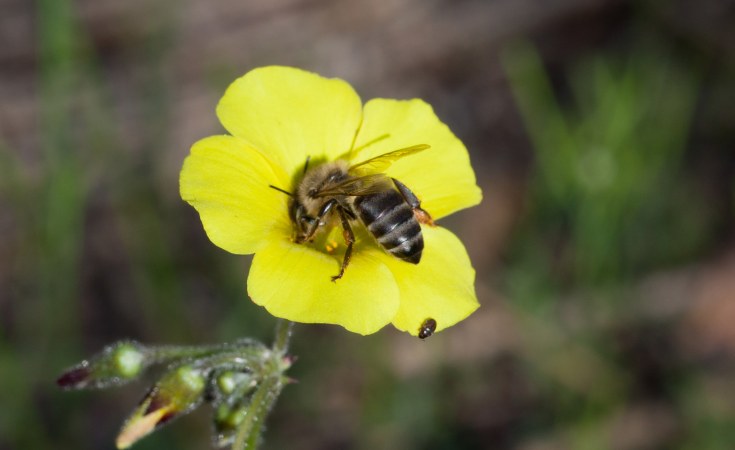 The world's bees face a major threat from deformed wing virus, a pathogen transmitted by the parasitic varroa mite. It is responsible for causing the death of millions of colonies in the US, Europe and Asia. The major losses started in the early 1990s with at least 30% of colonies dying each year.

The virus has been seen in 18 species of bees so far, as well as 64 other insect species, where it is typically benign.

Honeybees are very important for the pollination of crops, contributing between US$235 billion and $577 billion to global agricultural production every year. Any disease that causes colony deaths is therefore a major problem, though the cost of the damage caused by deformed wing virus is still unknown.

The continents of South America and Africa have not recorded major honeybee colony losses associated with the varroa mite, the number one pest of honeybees in the northern hemisphere. We investigated why varroa was not a problem in South Africa. One factor may be the presence or absence of the deformed wing virus, since it is this pathogen - when transmitted by varroa - that kills the infested colony.

Two subspecies of indigenous bees in South Africa (Apis mellifera capensis and Apis mellifera scutellata) make up a well-developed bee industry. They produce honey, wax and other related products, and also provide pollination services in crops such as oil seeds, deciduous fruits, subtropicals and nuts. In South Africa a total of 1,069 beekeepers are registered, managing 60,351 colonies.

Bees are the main pollinators of both natural flora and commercial crops and, therefore, of great economic importance. It's important to track the deformed wing virus, following its evolution and the impacts that each variant has on the various host insects.

The varroa mite is an external parasite of the honeybee which feeds on the bee's fat cells. The fat cells are nutrient rich and located near the surface of both adult and immature honey bees. The parasite's mouth-parts inadvertently transfer deformed wing virus into the bee's body where it multiplies rapidly. This reduces the bee's life expectancy, leading to the death of the colony.

The virus consists of three closely related variants (genotypes A, B and C). It is constantly mutating, like all other RNA (ibonucleic acid) viruses whose genetic material is encoded in RNA. The most commonly detected type is the A variant, which has been associated with widespread colony decline. The more recent B variant is starting to dominate colonies across the world but the danger it poses is not clear yet. The effects of type C are still unknown, as it is the most recently described variant and is very rare.

We used honeybee samples of both South African subspecies collected between 2004 and 2018 across the south of the country to compare the virus variant distribution and viral load. Pools of 10 adult bees or one infested pupa from each colony were analysed to access the RNA viral load within the bee's body and thus allowing us to identify which variant of deformed wing virus existed in South Africa.

Our study found that the B type variant was dominant in South Africa. Since the country has not had serious colony losses, this might suggest that type B is not so lethal. But in Brazil - another country which has not recorded major losses - type A dominates, so the relationship must be more complex than first thought.

The most important finding was that the viral loads in both South Africa and Brazil were much lower than what has been found in the northern hemisphere. This may be why the colonies did not die, since high viral loads are required to kill a colony.

A lower mite population would help explain the lower viral loads in South Africa and Brazil. The lower population may be achieved by the bees themselves: a recent study indicated that honeybees in South Africa and Brazil have learnt to detect and remove mite infested cells. This prevents mite reproduction. And this "hygienic" behaviour appears to be gentically heritable.

Our studies confirmed the low levels of the virus and the low infestation by the mite. More research is needed, however, to prove if there is a link between the hygienic bee behaviour and lower viral loads in colonies.

The only way to prevent colonies dying is to control the varroa mite. In the northern hemisphere this is typically done by using pesticides. Understanding how low viral loads are achieved would help beekeepers to use other control methods. They could selectively breed colonies that have hereditary traits of resisting the mite, or collect swarms from naturally surviving colonies that have already developed varroa resistance.