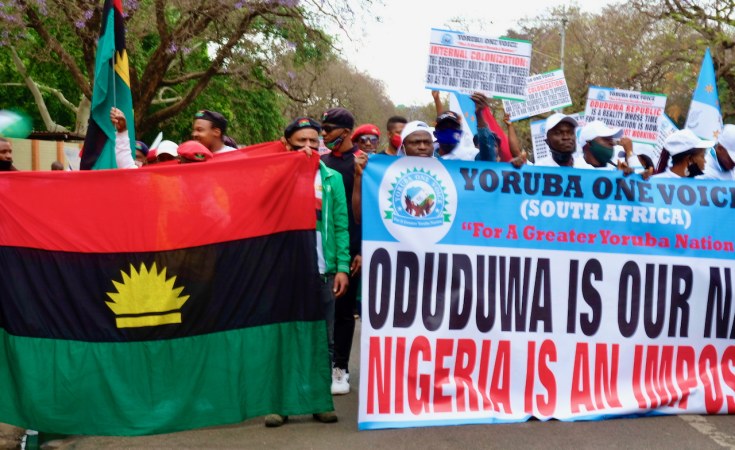 As the legal firework to stop the Republic of Benin from extraditing the embattled agitator for Yoruba Nation, Chief Sunday Adeyemo (a.k.a Sunday Igboho) resumes tomorrow, erudite scholars of International Law have argued that the Francophone country is under obligation to reject Nigeria's request to extradite him.

Among other conditions, the scholars predicated their arguments on the status of Igboho as a frontline campaigner for the self-determination of Yoruba Nation amid the provocative attacks on farmers and farm settlements in South-west states by 'killer Fulani herdsmen' and violation of federal character clause in the 1999 Constitution by the President Muhammadu Buhari administration.

Africa's foremost scholars of Jurisprudence and International Law, Prof. Akin Oyebode and Prof. Ademola Abbas made this clarification in separate interviews with THISDAY at the weekend, dissecting conditions under which any fugitive could be extradited under international law.

In the case of the Indigenous People of Biafra (IPOB), however, the law professors observed that Nigeria violated established international conventions and treaties for the arrest of the IPOB Leader, Mazi Nnamdi Kanu in Kenya and his subsequent repatriation to Nigeria.

As a result, they likened Kanu's abduction to how the State of Israel forcibly took Adolf Eichmann away from Argentina for his roles in the Holocaust.

Oyebode, a former Vice Chancellor, University of Ado Ekiti, first pointed out the centrality of extradition to international law, though observed that it could be carried out after requesting state and surrendering country had fulfilled all conditionalities regulating extradition.

The law professor explained that the basis for which a country could surrender any fugitive "is usually by a treaty or an agreement on extradition."

He, therefore, pointed out a concept embedded in extradition, which according to him, emphasised the need to establish double criminality by both requesting state and surrendering country before extradition process could be initiated.

Double criminality, according to him, requires that the crime for which a fugitive is sought must be a crime under the law of both requesting state and surrendering country.

Oyebode, however, explained exception to extradition under the customary international law, which he claimed, did not usually apply to political and military offences irrespective of national jurisdictions worldwide.

On this ground, Oyebode noted that extradition "does not apply to political offences. In the same way, extradition does not also apply to military offence. Of course, there must be a treaty. If there is no treaty, the fugitive can still be surrendered.

In Igboho's case, Oyebode said the ball "is clearly in the court of the Republic of Benin" to determine whether the agitator could be extradited after the operatives of Department of State Services (DSS) attacked his Ibadan residence, destroyed property worth millions of Naira and two of friends.said to have been killed during the attack.

In this context, the law professor observed that the Republic of Benin might insist that the crime for which Igboho "is being sought must be established prima facie in the court of Benin Republic."

Under international law, he pointed out that seeking self-determination "is not a crime. So, Igboho cannot be extradited on this basis. Also, do not forget the Republic of Benin has a substantial population of Yoruba people. Igboho will definitely enjoy sympathy of the government and people of the Francophone country."

He, however, pointed out the existence of the 1984 Extradition Treaty, a quadripartite agreement involving Benin Republic, Ghana, Nigeria and Togo, which according to him, could cause problems for the embattled agitator for Yoruba Nation.

Though subject to the fulfilment of the established conditionalities that regulate the extradition of a fugitive, the law professor argued that the old quadripartite agreement placed the Francophone country under obligation to extradite Igboho.

Oyebode, however, argued that Nigeria "has soiled its hands due to attack on Igboho's friends, family members and Ibadan residence. That shows Nigeria acted like Gestapo and that action might becloud Nigeria's request to extradite Igboho.

"He who comes to equity must come with clean hands. If the Republic of Benin does not believe justice can be done in terms of rule of law, presumption of innocence or fair hearing, they might refuse to surrender him.

"There is really nothing Nigeria can do about it. If the Republic of Benin believes Igboho is a political fugitive, it might refuse to surrender. In international law, refusal to surrender a fugitive is tantamount granting an asylum.

"In other words, If the Republic of Benin grants him asylum, that puts an end to the whole matter. By implication, Igboho becomes a political refugee and can exercise right to live in Benin Republic."

Abass, who taught in several British universities before he served as the Special Adviser, Overseas Affairs & Investment, Lagos State between 2015 and 2019, observed that Nigeria "has not committed any offence for asking the Republic of Benin to extradite Igboho."

Rather, according to the law professor, Nigeria is following the rule of law. That is simply because there is extradition treaty between Nigeria, Benin Republic, Togo and Ghana. That is the 1984 Extradition Treaty

Beyond the 1984 Extradition Treaty, Abass equally cited the 1994 Treaty of ECOWAS, which he argued, Nigeria could possibly rely on to pursue the extradition of the agitator for Yoruba Nation.

On the surface of these documents, the law professor observed that the Republic of Benin had an obligation to repatriate Igboho to Nigeria if requested by the Federal Government of Nigeria.

Consistent with Oyebode's line of thought, Abass reeled out laid down rules and conditions, which according to him, both requesting country and surrendering state had to fully observe before extradition request could be granted.

He, first, pointed out that a surrendering state "can only repatriate a fugitive if he has committed a crime in the other country. But there is an exception that the crime for which a fugitive is being sought cannot be a political or military crime."

If a fugitive must be extradited under international law, he pointed out that a requesting state "must abundantly prove that the fugitive will not suffer discrimination and that he will be guaranteed justice wherever he repatriating to."

He acknowledged the existence of a treaty obligation between Nigeria and Benin Republic, though claimed that the obligation had to be subject to salient questions to avoid any breach of international conventions and treaties

He noted that the salient questions "will be: has Igboho committed a crime in Nigeria? Will he be able to get justice in Nigeria? Or will he face discrimination? Will his trial be political? Those are critical questions that the Republic of Benin Republic must answer before granting Nigeria's request to extradite Igboho.

"The Republic of Benin has those obligations under the 1994 Treaty of ECOWAS, under African Charter on Human and Peoples' Rights. There are many international conventions that Nigeria and Benin Republic are signatory to. Whereas there is treaty between the two countries, that treaty itself does not take Benin's other obligations away.

"In the instance of the 1994 Treaty of ECOWAS, repatriation cannot only take place where is due process. They must have subjected Igboho to due process. Court must be satisfied that if Igboho is repatriated to Nigeria, he will not face political trial and he will be guaranteed justice."

In Kanu's case, however, Oyebode unequivocally observed that IPOB's leader was not extradited to Nigeria, but the security operatives of Nigeria forcibly took him away from Kenya and brought him to face justice in Nigeria.

He explained that Kanu's episode was almost reminiscent of what the federal government in 1984 to bring a former Minister of Transport, Alhaji Umaru Dikko from the United Kingdom to Nigeria in 1984.

He, therefore, likened Kanu's case to how the State of Israel violated the territorial integrity of Argentina to arrest Adolf Eichmann, a right-hand man of Adolf Hitler, who was charged with the identification, assembly and transportation of Jews from all over occupied Europe to their final destinations at Auschwitz and other extermination camps in German-occupied Poland.

Abass subscribed to Oyebode's standpoint that Kanu was kidnapped given the circumstance in which he was brought to Nigeria. He noted that it was in clear violation of all tenets of international law.

He said there "is a general impression that he was abducted from Kenya. With that, the federal government has breached international law because at the very minimum, Nigeria violated territorial integrity and sovereignty of another country."

He explained how the State of Israel went "to Argentina and forcibly abducted Adolf Eichmann for his roles in the Holocaust. It generated a lot of controversies between Argentina and Israel. The world knew the kind of crime Adolf Eichmann committed during the World War II. But that does not justify the action of Israel."

He, also, cited Umaru Dikko's case in 1984 when Nigeria went "to the UK to forcibly bring the former transport minister into Nigeria. This generated a lot of diplomatic row between Nigeria and the UK. As far as Kanu's case is concerned, Nigeria breached international law."

Igboho and the Ooni Caucus