Sudan: Interview With Maulana Siham Osman - the First Woman to Hold the Position of Under-Secretary At the Ministry of Justice 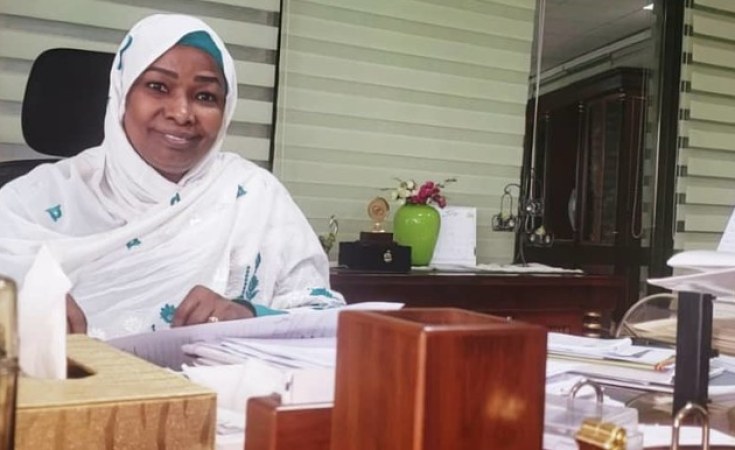 Radio Dabanga — For Radio Dabanga's Inspirational Women series we interviewed Maulana Siham Osman Mohamed Ahmed, the first woman to hold the position of Under-Secretary of the Minister of Justice. She also holds several important positions in national committees, including being Chairperson of the Committee to Combat Human Trafficking. She has worked hard to make sure that women's opinions are taken into consideration in legislation and juridical proceedings and also works to bring Sudan back into the international system.

She is the first woman to hold a position as high as under-secretary at the Sudanese Ministry of Justice and she also takes over the position of Minister of Justice if he is absent.

Her jovial face is calm. It is impossible to imagine the burdens and efforts behind it.

The powers of the under-secretary of the Ministry of Justice are of a special nature; it is the only ministry that has special legislation on the powers an under-secretary holds due to the great responsibilities that come with the position; she is also the chief executive officer for financial and administrative affairs in addition to other powers granted by the minister with regard to legislative authority and responsibilities.

On top of the huge tasks that come with being under-secretary, Maulana often acts on behalf of the Minister of Justice with his authorisation when he travels. Again, the Ministry of Justice is the only ministry whose minister is allowed to authorise someone to act on their behalf in their absence.

Responsibilities and challenges in revolutionary Sudan

'Sudan has emerged from a long period of repression of freedoms and grievances. Everyone is now resorting to the judicial authorities'

Maulana explains that "the current challenges are great... Sudan is now going through unprecedented changes". The country "has emerged from a long period of repression of freedoms and grievances. Everyone is now resorting to the judicial authorities".

The transitional government has established various committees to deal with the aftermath of the dictatorship and the war "and the Ministry of Justice was a member of all these committees, so there are burdens on the judicial organs in all areas and responsibilities to activate the administrations in all states".

Since Maulana assumed the role of under-secretary, women in Sudan have won several victories in relation to laws and legislation, including the ratification of one of the most famous and controversial international agreements, the Convention on the Elimination of All Forms of Discrimination Against Women (CEDAW).

The cabinet eventually voted to ratify the convention with reservations, but CEDAW was approved by the Ministry of Justice without any reservations before being deposited it with the cabinet for a vote. "Personally, the CEDAW agreement is acceptable to me", Maulana explained.

The CEDAW ratification was not the only battle the Under-Secretary had to fight. Amendments are still in progress to establish legislation that eliminates bias and supports women and their dignity and Maulana has worked to make sure that women's opinions are taken into consideration in juridical proceedings.

She explains, "we established a ministerial committee to amend the Personal Status Act with sufficient representation of women because they know their issues best". This controversial law, also known as the family law, is based on the Shari'a and states among other things that women must be obedient to their husbands and girls can marry from 10 years old.

"The trend now is to put in place a new law that will be subject to consultations with specialists."

"There are many differences of opinion on the part of the jurists and legislators, but the door is open for discussion and for siding with women and doing what is in their best interest", Maulana explains.

Other highlights during her career as under-secretary so far have been the criminalisation of female genital mutilation, the abolishment of the Public Order Law, and amendments to the Criminal Procedures Law that allow infants to accompany their imprisoned mothers. The regulations relating to the right of women to accompany their children to travel and to obtain their identification papers were amended too.

Other efforts to advance points for Sudan

During their tenure, these committees showed remarkable performance. Sudan's file on human trafficking witnessed significant progress, including moving from stage three to stage two on the human trafficking index. This happened "because of the efforts that were made and because we prepared the required reports", Maulana explains.

She is now working hard to prepare a report on money laundering and combating the financing of terrorism, which will be presented before the Financial Action Group, consisting of the major industrial countries, at the end of 2022. Maulana hopes that Sudan will progress in that file as well and the committee has cited World Bank funding to assist in the efforts to combat money laundering and terrorism financing.

She said: "Sudan's accession to international trade was difficult because of the country's isolated position. Now, the situation has changed and the file has been revived."

Who is this powerful woman?

Maulana Siham Osman Mohamed Ahmed was born and raised in Omdurman in 1962. She studied at El Hara El Thania Elementary School, then Karari Intermediate School, and El Balak Higher Secondary School. She joined the University of Khartoum to study at its Faculty of Law between 1981 and 1985.

In 1988, she was appointed at the Ministry of Justice as an assistant advisor in training. More than ten years later, she went abroad and received a master's degree in intellectual property rights from the University of Turin, Italy, in 2003.

This made Maulana the first woman to hold the position of under-secretary in the Ministry of Justice despite Sudanese women's leadership in the field of law at the regional levels, in Africa and the Arab world.

She is the mother of one daughter and her family currently resides in Omdurman.