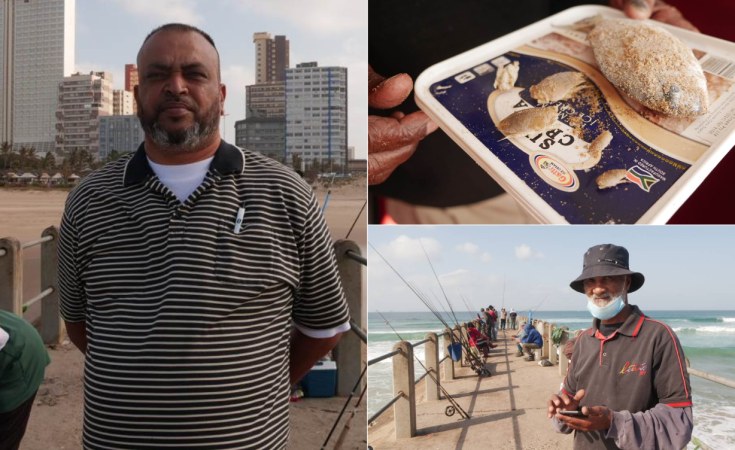 All images by Kim Harrisberg/Thomson Reuters Foundation
Left: Riaz Khan on a fishing pier in Durban, South Africa. Top-right: A fisherman holds poisoned sea lice and fish on an ice-cream lid that he found on the beach soon after the chemical spill in in Durban. Bottom-right: Fisherman Bob Abrahams poses for a photo on a fishing pier in Durban.
Daily Maverick (Johannesburg)
analysis By Tony Carnie

The Indian-owned toxic chemical plant that blew up and polluted air, rivers and sea around Durban was part of a special 'fast-track' economic investment scheme by national government, with no specific environmental or hazardous substance approvals or any local government scrutiny.

Back in India, the company has just been fined nearly R2-million after one of the company's pesticide manufacturing plants was shut down by authorities following an explosion five months ago, which killed three workers and injured many more. The Supreme Court in New Delhi has also ordered it to pay another R20-million for operating a major plant for decades without valid environmental authorisation - while company lawyers have hounded journalists for decades for publishing 'defamatory' stories about its legacy of environmental pollution.

Containing up to 1,600 different chemical products - many of them highly toxic - the Indian-owned United Phosphorus Limited (UPL) pesticide and agro-chemicals warehouse which blew up in Durban on 13 July was part of a special national government investment scheme in which normal regulatory approvals are "fast-tracked" to attract investors.

Officials have revealed that no "specific" environmental impact study was conducted on chemical storage and potential pollution for the new UPL facility in Durban, as...

Lessons to Be Learnt From Durban's UPL Pesticide Fire