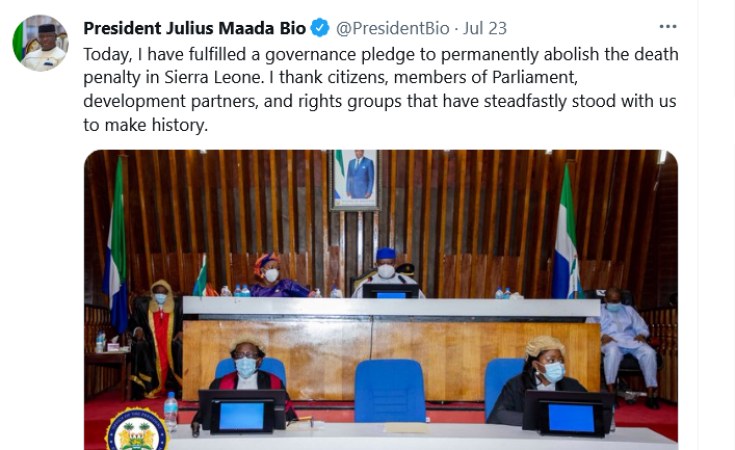 In a historic vote by the parliament in Sierra Leone Friday, lawmakers abolished the death penalty, following in the footsteps of more than 20 countries on the African continent who have already done so

There were concerns that the outcome will be abused by criminals who have already indicated they would kill then go to jail, serve the sentence and come out again.

Addressing these concerns, parliamentarians agreed that the death penalty would be replaced with a life sentence. Judges can now pronounce a mandatory minimum of 30 years with the option of the accused doing more time, depending on the severity of the crime.

Major Palo Conteh is former defence and internal affairs minister and was recently charged with treason, a crime that normally carries a death penalty sentence on conviction. He had been discovered with a pistol on his way to meet President Julius Mada Bio at State House.

Convicted for the possession of a weapon that was not properly registered, Conteh served a two-year sentence while his appeal was being heard. President Bio finally granted him clemency and freed him.

"Personally I think we should retain the death penalty for certain offences," said Conteh.

"Of course, [from] my experience with treason, I would say no, because it can be used as a political tool. However blatant [crimes], like people who kill young children - I think offences like those should carry the death penalty," he added.

The struggle to have the death penalty abolished has been a difficult one.

"It has been a very difficult journey-- we have been on this campaign for the abolition of the death penalty for over 30 years," said Solomon Sogbandi, Amnesty International's local chapter director, who welcomed the news of its suppression.

"It's a happy moment for us, it's a success story..," said Sogbandi.

Civil society leaders called it a "historic" moment of great progress for the people of Sierra Leone.

"Since 1861 we have had the death penalty on our law books; today, we have made a decision as a people and as a government and as a country, to make a departure from our brutal past," said Ibrahim Tommy, activist and director for the Centre for Accountability and Rule of Law (CARL).

Those who RFI spoke to on the streets of Freetown believe the law should have been left on the books, but are willing to wait and see if there will be a difference.

For some, the abolition of capital punishment suggests that supporters of its suppressionare soft on crime. Amnesty's Sogbandi said that this perception is false.

"It did not mean that we support criminality, or we support people who feel they can take people's lives and go to jail for a short time and come out again," he added, referring to fears of recidivism.

Former government minister Conteh feels that the time was not right for banning capital punishment.

"The government pathologist said he was getting 42 corpses per month," he said, referring to the spate of murders during his tenure as interior minister.

Minister of Justice Anthony Brewah was jubilant after the vote, he told RFI, because he said it would prevent innocent people from being killed.

"I know so many mistakes have been made in the past, people have been killed for offences which they did not commit but at the same time they cannot be brought back, even if they discover new evidence to show that these people are blameless," he said.

"I am very happy, especially for the politicians who have used it over the years against their opponents..." he added.

The last executions took place some 23 years ago on 20th October 1998 when 24 soldiers were executed by firing squad after they were convicted by a military tribunal.

For the 93 inmates on death row, including six women, their death sentences will be commuted to years in prison, according to Brewah, who is also Sierra Leone's attorney general.

"It's an administrative process for those on death row-- they don't need to go to court again," he added.

While now the 93 death row prisoners will have their sentences commuted to at least 30 years, prison was initially seen as a place where convicts would be transformed and eventually return to live as a free and productive member of society.

Conteh says government has only paid lip service to this ideal.

"It's not like prisoners have been sent to do some academic work, technical jobs so that you make them better, or use psychologists and psychiatrists to transform their minds before you let them out back into society again. Nothing is happening," he told RFI.

"We need to look at proper reform of the prison system, then we can begin to talk about transforming people and think of giving them a maximum or minimum sentence," he adds.