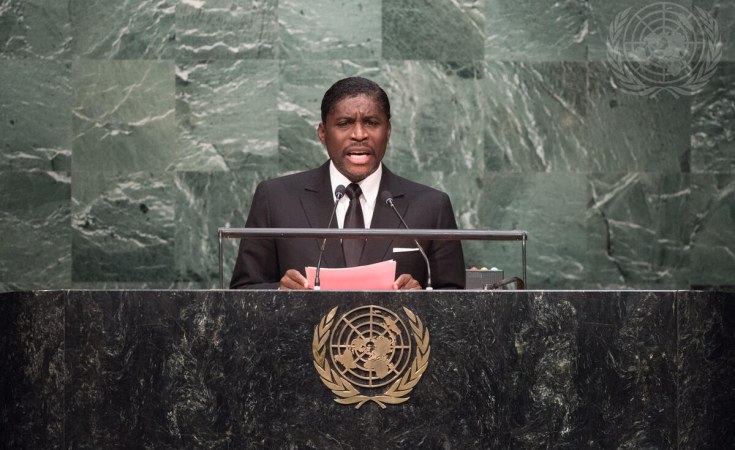 The London embassy will close after the UK sanctioned the son of Equatorial Guinea's president last week. Britain has barred the president's son from entry and frozen his assets.

Equatorial Guinea announced on Monday that it will close its London embassy after Britain sanctioned the son of the president last week, alleging corruption.

Teodoro Nguema Obiang Mangue, 53, is also the vice-president of Equatorial Guinea and is responsible for the country's defense and security. His father, President Teodoro Obiang Nguema Mbasogo, 79, is the longest sitting president in the world and the dynastic leaders stand accused of a litany of rights abuses.

The British government alleges the younger Obiang misappropriated more than €425 million ($500 million),spending it on mansions, private jets and a $275,000 (€233,000) glove covered in crystals that Michael Jackson wore during his 1987-89 "Bad" tour. Obiang's assets were frozen and he is barred from entering the UK.

"Equatorial Guinea will not accept interference in the internal affairs of the country, which violates the principle of international law," the country's foreign minister, Simeon Oyono Esono, said on state broadcaster TVGE.

He did not say when the embassy would close or whether there was a timetable yet for its closure.

The elder Obiang seized power through a bloody coup against his uncle Francisco Macias Nguema in 1979, just 11 years after the country's independence from Spain.

Last week, when the UK slapped sanctions on the younger Obiang, Equatorial Guinea's foreign ministry fired back in a statement, "The unfounded sanctions imposed by the British Government are justified by the manipulations, lies and malevolent initiatives promoted by certain non-governmental organizations against the good image of Equatorial Guinea,"

While the foreign ministry claims the younger Obiang has no investments in the UK and asserts he has not been charged there, he has incurred a three-year suspended sentence in France and a €30 million ($35 million) fine along with the confiscation of his assets there.

His fleet of luxury cars and a mansion valued at more than €107 million ($126 million) on the posh Avenue Foch in Paris were all seized during a French probe into his "ill-gotten gains."

On Wednesday, a French high court will make a final determination over the February 2020 ruling that handed Obiang the suspended sentence, fine, and permitted his assets to be seized.

Obiang is widely viewed as the likely successor to his father.

Equatorial Guinea is the only Spanish speaking nation in sub-Saharan Africa. While the country is oil rich, 76% live in poverty according to World Bank figures.

New Documentary Explores One of the World's Oldest Dictatorships