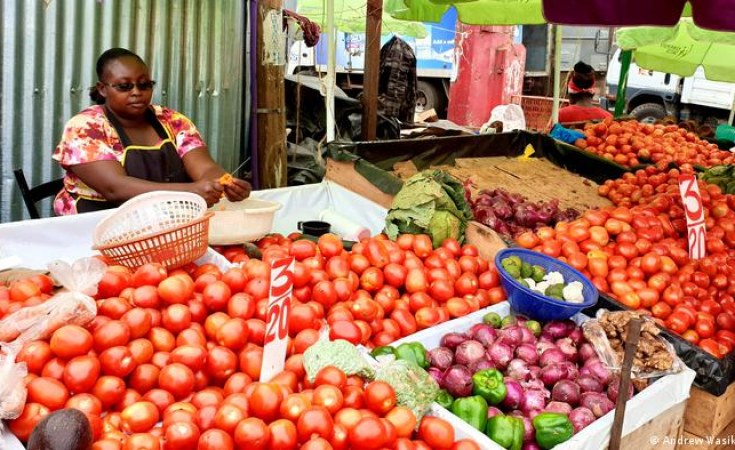 Kilifi, Kenya — Cryptocurrencies make headlines for shaking up the financial world, but they are also gaining ground in less developed countries. In Kenya, an American economist, who introduced blockchain technology for low-income urban customers, has extended the cashless system to the countryside.

On a lush green farm in Kilifi on Kenya's tropical Indian Ocean coast, 26-year-old farmer Emmanuel Kahindi is harvesting tomatoes and other vegetables. He is using Kenya's cryptocurrency, Sarafu, to sell his vegetables, and to buy supplies without having to use any cash.

Sarafu helped me a lot, he said, especially because it makes me save my money, my Kenyan currency. He said he uses Sarafu to purchase things for the garden like seeds and fertilizer.

Sarafu coins work like vouchers that can be exchanged for goods or services of other users of the currency. Anyone with a Kenyan mobile phone line can enroll. Users are given 50 Sarafu for free. After that, they earn coins by selling a product or service to another user.

Sarafu is what's known as a community inclusion currency, or CIC, allowing people to give or take credit without having to deposit Kenyan shillings or other currency in a bank.

It was created by Will Ruddick, an American economist through his Kenyan nonprofit, Grassroots Economics. He recently introduced it to rural areas like Kilifi.

Kahindi moved with his harvest to a nearby restaurant in Kilifi. There he offers his vegetables for selling and gets Sarafu in a return. The owner is Giataari Mwang and he said he is happy with it.

"Sarafu is good because it allows us to get our farm produce straight from local neighborhood farms and put it on our plate and serve it to our customers and they are able to pay us with Sarafu," he said.

Bitange Ndemo is a senior lecturer at the University of Nairobi. He said such community-focused cryptocurrencies have a potential to expand beyond Kenya and in other parts of Africa.

He said that cryptocurrencies give communities an option to monetize resources in a way that they cannot do with cash, pointing at the cobalt mines in the Democratic Republic of Congo as a potential example.

"Nothing stops them from a cobalt coin based on the reserves they have in terms of cobalt. The country then can then raise sufficient resources to develop the country," said Ndemo.

In Kenya, the coins will be based on the agriculture production across the nation and here in Kilifi.

For Emmanuel, it is time to relax after work. He is now seated in the restaurant and is using Sarafu to enjoy a well-deserved meal.

Previous Story
Next Story
Cryptocurrency - Should It Be Regulated?

Cryptocurrency - Should It Be Regulated?