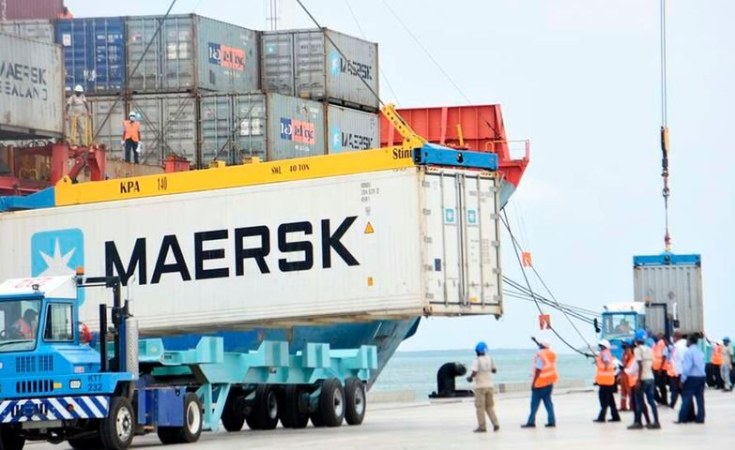 Kevit Odit/Nation Media Group
Lamu Port begins operations after receiving its first Cargo Ship at Berth Number 1 during the official launch by President Uhuru Kenyatta in Lamu County on May 20, 2021.
The Nation (Nairobi)
By Kalume Kazungu

The presence of 'strangers' in a list of fishermen expected to share a compensation package of Sh1.76 billion following the construction of the Lamu port has rubbed many the wrong away.

There have been complaints from fishermen that there were dubious processes that had allegedly seen names of public servants being introduced as beneficiaries.

Most of them reportedly work with Kenya Ports Authority (KPA), Kenya Revenue Authority (KRA), Ministry of Health and the police service.

The Lamu Port-South Sudan-Ethiopia-Transport (Lapsset) task force on fishermen compensation confirmed yesterday that names of KPA staff, civil servants and security officials had been sneaked into the final list.

Speaking to the Nation, the task force said some had been listed as "either next of kin, or owners of fishing vessels that were affected by the construction."

"We have names of KPA, KRA and health staff as well as police officers and other public servants in the list of those to be compensated. It isn't something to worry about since those that are included are next of kin or fishing boat owners who were also affected by Lapsset activities at Kililana," said the chair of the Lamu County Beach Management Unit (BMU) Network, Mr Mohamed Somo, a member of the task force.

He said the entire process of identification, verification and approval of the affected fishermen had been done in a transparent and fair manner. He said they were at their final stage of verifying bank details of all beneficiaries.

"We have cases where the father, who was the fisherman, died. The son, who is the only individual authorised to sign, is a public servant. That's not a reason to deny them their rightful compensation," said Mr Somo.

Mr Mohamed Athman, a task force member, said the existence of civil servants should not be a problem.

"Having KPA, KRA or health staff in the list of Lapsset beneficiaries isn't a big issue. They are the next of kin. Others are businessmen in the fishing sector while some are boat owners. They were also affected by the dredging and deserve compensation," said Mr Athman, who is also the chair of Save Lamu, a non-governmental organisation.

Mr Athman, however, lamented the lack of co-operation from KPA in finalising the deal. He threatened to organise a demonstration if the delay in compensating fishermen continues.

"The only complication delaying the process is at KPA. They seem unwilling to cooperate and finalise the deal. If this continues, we won't hesitate to picket so that our cries can be heard out there," he said.

"The role of KPA, which we have already done, is to facilitate the community, especially the BMU officials in obtaining the right list and bank accounts of those to be compensated," said Mr Osero.

"We believe in the BMU leadership and it's not our fault if among those in the list received will be fake claimants. What we know is that we will be compensating fishermen affected by the Lapsset project."

He also defended the authority from claims that it was behind the delay in compensation.

"We have started verifying bank account numbers of the affected fishermen. This week, we are organising a special meeting with lawyers from KPA and Save Lamu to finalise on the pending issues, including signing of the consent note before compensation can begin. There is no course for alarm," said Mr Osero.

In May, 2018, the High Court awarded 4,734 Lamu fishermen Sh1.76 billion as compensation owing to the adverse effects brought about by the construction of the Lamu port at Kililana.

The fishermen had argued that they would no longer be able to carry on with their venture due to dredging activities. They said their livelihoods would eternally suffer and, as such, deserved compensation to enable them to pursue alternative livelihoods.

The government had promised to release the money by the end of May after it was agreed that the processes would be concluded out of court. So far nothing has materialised.