South Africa: Xolobeni - Where the Discovery of Rare Minerals Has Led to Violence 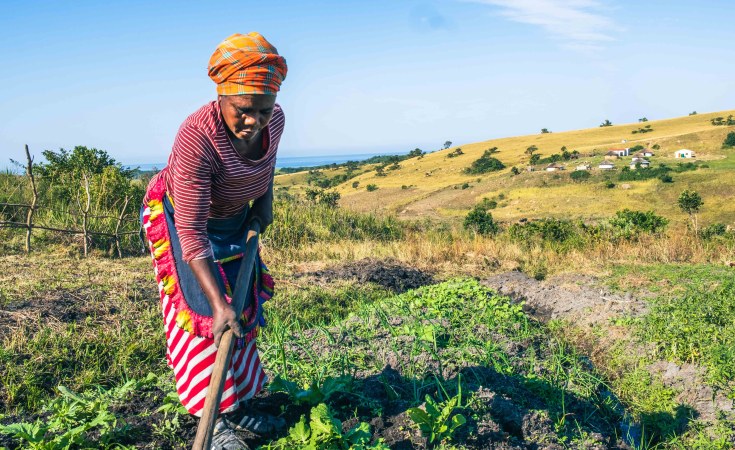 "Without land, we are nothing." Bekeni Danca, 40, was born in Xolobeni village and fears that if the project of an Australian-based company to mine the mineral sands along the coast of her village goes ahead, she will lose everything.

"We use the land where they want to build the mine," Danca says, referring to the indigenous forests along the Wild Coast. "There are guava and banana trees. We fish in the sea. Traditional healers find their muthi there. Sometimes I find plants there for my stomach or menstrual cramps. If they build that mine all that will be destroyed."

Her garden is big, with sweet potato, amadumbe, onion, maize, tomato, carrots, spinach and beetroot. She also has banana trees.

"We build our houses here and most of us have cows that rely on this land for grazing."

"This is all I know: waking up and going to the garden," says farmer Neliswa Mdukisa. She is 52 and was born in Xolobeni village. She was taught how to farm by her parents.

"We eat our own vegetables. The only thing we buy from the shop is cooking oil and spices," said Mdukisa.

In 2002, rare minerals were discovered on the Xolobeni coast. Mineral Sand Resources (MSR), a subsidiary of Australian company Mineral Commodities Ltd (MRC) applied to mine them. Over a lifetime of 22 years, the mine would extract 9 million tons of ilmenite, titanium-iron oxide, rutile, zircon, and leucoxene.

Although mining rights were initially granted by the Department of Minerals and Energy in 2008, the decision was suspended after legal interventions by the Amadiba Crisis Committee and the Legal Resources Centre (LRC). The rights were revoked in 2011. But in March 2015, MRC filed another Mining Rights Application, through a subsidiary, Transworld Energy and Resources (TEM).

After an application by the LRC and Richard Spoor Attorneys, representing members of the community, the Pretoria High Court ruled in 2018 that mining developments can only take place with the full and informed consent of the Xolobeni community. If consent is not obtained, no mining may happen unless the state expropriates the land.

Minister of Mineral Resources and Energy Gwede Mantashe applied for leave to appeal the ruling. But to date, the state has not pursued the appeal. Since a 2019 meeting in Xolobeni, which ended with teargas and rubber bullets, Mantashe has not been back to the area.

Meanwhile the community is divided abut the mine. Many residents are frightened by the very idea of a mining development in their community.

MRC's mining right application reveals that it would require about 13 to 15 million tons of freshwater a year.

"We all know the mine uses a lot of water," says Mdukisa, who fears that the mine would threaten her water source.

Nontsindiso Ndovela is the mother of eight children. She lives in Mtentu, near Mtentu lodge and campsite. She cleans and cooks for tourists at the camp site and sometimes hosts tourists in her mud rondavel.

"This is not a development," she says of the mine, "It is going to kill us. If we agree to this we will be letting our children down."

Ndovela fears that after losing her current source of food and income, she will have to resort to sex work to feed her children.

MRC told GroundUp that the Xolobeni mining project "has been paused".

But Danca is not convinced. "We are living in fear that the mine issue might come back," Danca says. "Our lawyers are working hard, but with this government, you never know."

According to Johan Lorenzen, an associate at Richard Spoor Attorneys, 68 out of 72 homesteads within the 1.5km x 22km mining area oppose the mine and are their clients, but some members of the Xolobeni community who do not live within the exact mining area support the mine, and the issue has led to bitter fights. It is suspected by many to be the reason for the assassination of Bazooka Radebe, a fierce opponent of the mine who was chairman of the Amadiba Crisis Committee (ACC), which opposes both the mine and the N2 Toll Road project. No-one has yet been arrested for his murder.

Five men are currently facing charges for other violence in the area, including attempted murder. Court appearances have been repeatedly postponed for various reasons.

ACC spokesperson Nonhle Mbuthuma, chairman Sibusiso Mqasi, and a third leader received a death threat in July 2020. A community member said that he had been approached by a gang of seven who demanded Nonhle be killed. In November, Mqasi died in hospital after experiencing abdominal pain. Some people in Xolobeni believe he was poisoned. Mbuthuma received a second death threat in November 2020. She currently travels with a private bodyguard.

The Amadiba Crisis Committee has accused the Australian mining company of bypassing the community and dealing instead with elite shareholders and politicians in the area, including local businessman and former Mbizana mayor, Zamile Qunya, and the Amadiba chief Lunga Baleni. Qunya and Baleni are shareholders in a black empowerment company called Xolobeni Mining Company (XolCo) which owns part of the mining project through a complicated structure.

XolCo also has shares in MRC's Tormin West Coast mine, of which Qunya is a non-executive director.

MRC has distanced itself from all incidents of violence but did not comment on its community engagement strategy.

"This community used to be one, but now we are divided and it's not even a secret," Zanele Mbuthuma, ACC member from Sigidi, told GroundUp.

One of the topics which divides the community is the issue of possible jobs from the mine. The executives, politicians, and project managers that visit the area to campaign for support for the mine and a toll road insist that the developments would create opportunities for jobs.

Richard Mtwa, who opposes the mine, says that by running after jobs his fellow residents are taking what they have for granted.

Mtwa says his piece of land acts like an inheritance and can benefit countless future generations. Any threat to the land is a threat to his livelihood.

"A healthy person who begs for food is an insult to God," Mtwa says. "We are refusing to become beggars while we have land to use."

"They are saying these projects will create jobs but for who? Agriculture and tourism are what fed our families and it continues to feed them. As you see, some people just came out of their gardens. They were harvesting sweet potatoes to sell at the market in Durban," subsistence farmer Thembekile Dlamini told GroundUp.

But not all homesteads have access to roads, water, and fertile ground. The villages that are not by the coast do not benefit from ecotourism or biodiversity in the same way. There are fewer streams, and only a few houses have running tap-water.

The residents of this area are desperate for a source of income. Only one in five people in the area receive water from a regional or local service provider, and even fewer have electricity. The average monthly income is R1,250. The unemployment rate of those between the age of 15 and 65 is 52%.

One resident, who asked not to be named, told us that he supports the mine, although he would not declare it publicly. He said that his family members are in need of jobs and the mine would be one of the only opportunities for them.

"Besides," he told us, "our brothers and sisters are working in mines in Johannesburg. Now they can work closer to home." He said that development is necessary, and he does not support the ACC because they are against development.

But the environmental impact assessment (EIA) for the 2007 mining rights application, conducted by Groundwater Consulting Services on behalf of MRC, found that the loss of farmland would not be compensated for by job-creation in the mine. "The potential direct employment opportunities for the local community are likely to be limited," the report said, because of the lack of required skills.

In its environmental management plan (EMP) MRC said: "The community who will be most severely impacted by the proposed development are unlikely to benefit significantly from the permanent employment opportunities associated with the mine."

Chairperson of Xholobeni Youth for Sustainable Development, Fanele Ndovela is concerned that the ACC has too much power in discussions at the Komkhulu (Great Place). "We have seen even white people participating there and this is really concerning. At this stage, that place no longer has the credibility it used to have. Back in the days, it was the place that was making pro-development decisions, [such as] to build the Xolobeni School." [The group spells Xolobeni in its name with an "h". - Editor]

Ndovela says that Komkhulu is no longer equipped to make development decisions for the whole community. He says the conversation has been polarised between anti-mining groups and pro-mining groups and the role of government should be to consult with both objectively.

"As the youth of Xolobeni, we are the future of what should happen in the area," Ndovela says. But he says no-one from the government, or the mining company has asked what his opinion is on the mining issue. He agrees with the high court ruling that the community should give consent.

Ndovela says that mining, tourism, and agriculture can co-exist, "as is the case in different places like Richards Bay and others".

The mine in Richards Bay Ndovela refers to is similar to the one proposed for Xolobeni. It has similarly divided the local communities there and has experienced much violence. Several activists and politicians have been killed and in July 2021, the mine declared force majeure after the assassination of its general manager.

Regarding the presence of white lawyers at Komkhulu, she agrees it is unusual. But she says that when they first approached Richard Spoor, "we were not looking for a white person". The lawyers are at Komkhulu because they understand the human rights threat to the Xolobeni community, Mbuthuma says.

This is the first in a three part series on Xolobeni, where members of a small community have been battling for years against a road project and a mine project. Tomorrow: Xolobeni: the N2 toll road may be a bridge too far

Previous Story
Tagged:
Copyright © 2021 GroundUp. All rights reserved. Distributed by AllAfrica Global Media (allAfrica.com). To contact the copyright holder directly for corrections — or for permission to republish or make other authorized use of this material, click here.