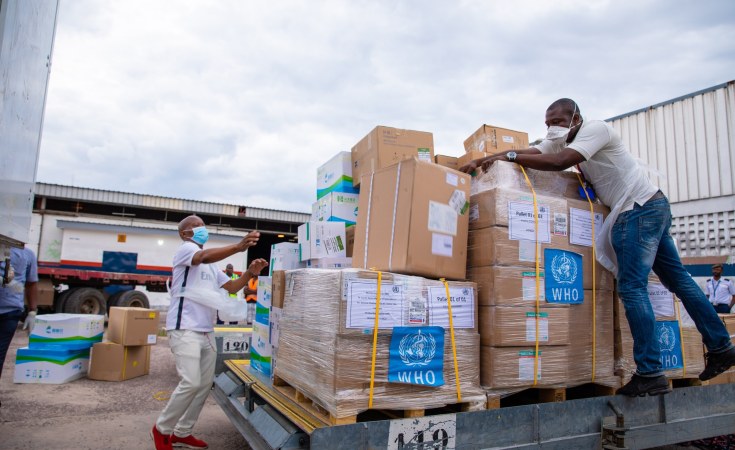 WHO Africa
A solidarity flight from Addis Ababa to Brazzaville delivers supplies for the flight against Covid-19.
World Health Organization (Geneva)

Her Excellency Ellen Johnson Sirleaf, former President of Liberia, and Rt Hon. Helen Clark, former Prime Minister of New Zealand, today briefed Member States at the United Nations General Assembly on measures to respond to COVID-19 and prevent future pandemics. HE Ellen Johnson Sirleaf and Rt Hon. Helen Clark were Co-Chairs of the Independent Panel for Pandemic Preparedness and Response which reported to the World Health Assembly in May 2021 on lessons learnt from the international response to COVID-19.

Based on a close analysis of steps taken and not taken in response to COVID-19, the Panel made a sweeping set of recommendations designed to ensure that no future disease outbreak is allowed to become a devastating pandemic. Recommended actions included that the United Nations General Assembly should adopt a political declaration setting out a road map to strengthen the international system, and that a Global Heath Threats Council be established at Head of State and Government level, with its membership endorsed by the General Assembly. The Panel also called for steps to strengthen and empower WHO, and backed proposals for a new pandemic framework convention.

Given the ongoing pandemic crisis, the Panel also called for the reallocation of a billion COVID-19 vaccine doses from high-income countries with an adequate coverage pipeline to low- and middle-income countries by September, and of another billion by mid-next year, and for all countries to use the full range of public health tools to curb the pandemic.

HE Ellen Johnson Sirleaf told the meeting that the current pandemic is an ongoing disaster which the Independent Panel for Pandemic Preparedness and Response believes could have been averted. "The General Assembly has a decisive role to play in backing the needed reforms, strengthening the multilateral infrastructure so that it can identify and respond more quickly to the next virus with pandemic potential", she said. "While in some places, vaccines are blunting the worst of COVID-19's impact, for too many countries, supplies are so limited, and prospects for access pushed so far into the future, that hope is turning to despair."

Helen Clark noted that the Panel had found that geopolitical tensions and nationalism had weakened the multilateral system which was designed to keep the world safe. "The pandemic is not only a health crisis; it is also a social economic, political, and peace and security crisis. The General Assembly has a crucial role to play in ensuring that the international system is coordinated and empowered to identify and act against future diseases with pandemic potential", she said. She welcomed signs of progress on the Panel's recommendation that WHO and the WTO bring together manufacturing countries and manufacturers to scale up vaccine manufacturing capacity rapidly. "An international pandemic financing facility is needed to distribute up to ten billion dollars a year for preparedness and disburse up to one hundred billion in the event of a crisis, allocated by the Global Health Threats Council", she added.

HE Ellen Johnson Sirleaf reflected on her experience as President of Liberia: "It fell on me to lead our population through the devastating experience of the Ebola epidemic and the hard-won recovery from it. I speak with conviction when I say that this current pandemic must be the last to cause devastation to human life, societies, and economies. As a world, we must do better", she said.

The informal plenary meeting of the Members and Observer States of the United Nations General Assembly was convened by the President of the General Assembly at the request of the Group of Friends of Solidarity for Global Health Security. The purpose was for the General Assembly to be briefed on the findings and recommendations of the Independent Panel for Pandemic Preparedness and Response, as contained in the Panel's report: "Covid-19: Make it the Last Pandemic".