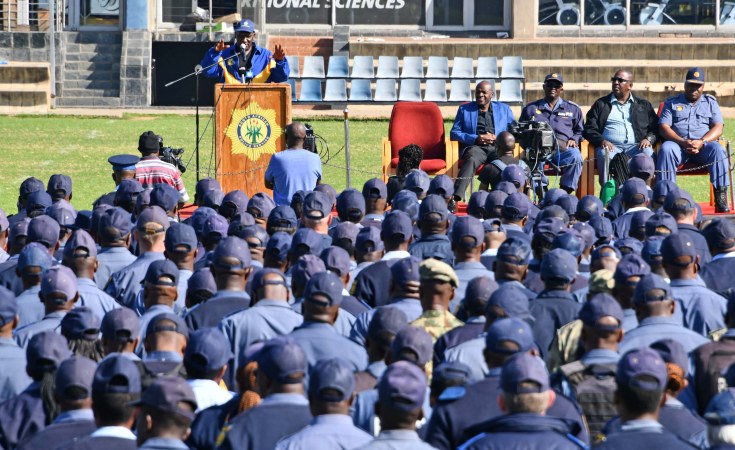 The problem isn’t funding or expertise – it’s a political one that President Ramaphosa cannot allow to fester.

The July attacks on South Africa's economic infrastructure exposed severe weakness in the police at a time of national crisis. Police were often missing in action as thousands raided malls and shut down transport, supply chains and logistics hubs.

After President Cyril Ramaphosa announced that the 'attempted insurrection' had failed, many questions remained about the inability of police intelligence and a relatively well-resourced South African Police Service (SAPS) to prevent sabotage and criminal chaos.

But will the SAPS perform better next time? Will this most recent high-profile police failure be the impetus for bold and urgent reforms in the interest of political stability and public safety?

The crisis of July 2021 should be the turning point for a vital function of the state, with its huge budget and vast human resources. It is now clear how important the SAPS' performance is to the government's ability to keep the economy, water, power, education and healthcare functioning.

Fixing the police is possible but will only happen with political recognition that a well-trained, high-functioning, ethical and accountable police service is critical to the country's success.

In a hierarchical organisation like the police, dysfunction at the top flows steadily downwards

In a hierarchical organisation, dysfunction at the top flows steadily downwards. Successful police reform must therefore begin with a fearless assessment of SAPS' bloated police leadership. Too often political loyalty is valued over competence, and the wrong people are appointed to top positions, often without due process.

SAPS leadership has been in crisis for over a decade. The post of national commissioner has been held by eight people since 2009, causing regular upheaval, mistrust and conflict among senior police. Aggressive political interference has been enabled by problematic SAPS Employment Regulations gazetted in 2018 that allow too much ministerial influence over top appointments, transfers and promotions.

The SAPS has almost 200 generals and more than 600 brigadiers collectively earning around R1 billion annually. It was on their watch that the police let the country down. There are many highly experienced police leaders of great integrity, and they too were let down by their less than capable colleagues.

Deadwood must be swiftly removed, the SAPS top management downsized, and police leadership positions opened up to a transparent and competitive recruitment process insulated from political interference. Only those with proven capability, knowledge, experience and integrity should be in charge of running the police. But there is no current plan to achieve this, despite SAPS performance declining substantially for most of the past decade.

Police numbers will drop by a sizeable 24 000 posts over the next three years due to public sector budget cuts. The impact will be acute at station level, with nearly 2 000 fewer detectives and 11 000 fewer visible police officials. Yet only 15 posts will be lost at the top level of general and brigadier. This means the expensive and ineffective senior management structure largely remains while thousands of operational posts are slashed.

Another priority is to get crime intelligence working. The insurgency of mid-July should not have been a surprise as it was openly promoted by identifiable political and corrupt African National Congress (ANC) factions. The burning of trucks and closure of the vital N3 highway had happened before, in November 2020, by networks trying to stop foreign nationals from working as drivers. But crime intelligence has failed to dismantle these groups and support the criminal prosecution of those responsible.

With 8 000 personnel and a R4 billion annual budget, crime intelligence should be able to do more to anticipate orchestrated criminal economic sabotage. The looting and destruction of property were predictable. According to Institute for Security Studies tracking data, they tended to occur in hotspots that experience regular disruptive protests and other forms of public violence.

These high-risk areas should long have been the sites of interventions to strengthen community relations with the government, including local councillors and police. Steps to do so include a combination of improved service delivery, economic development initiatives, and the building of community conflict management and early warning systems.

Next, there is an urgent need for a functioning disciplinary system in the SAPS. In an organisation with guns and power - and a vital role in a young democracy - there must be a way to maintain discipline and remove corrupt, ill-disciplined and under-performing officers.

But the SAPS internal disciplinary system has largely collapsed. Internal disciplinaries dropped 71% between 2012/13 and 2019/20. In half of the hearings, the case was withdrawn because witnesses failed to appear or evidence went missing. In only 7% of hearings do police officers get dismissed or suspended without pay.

Despite budget increases, police numbers dropped because of automatic promotions for non-commissioned officers

The external police accountability agency, the Independent Police Investigative Directorate, has not performed much better. Of the 47 984 cases opened against police officials between 2012 and 2020, only 16% were referred to the SAPS for disciplinary action, with a paltry 3.2% ending in a disciplinary conviction. Only 0.4% or 194 police officials were dismissed as a result. The effect is widespread police brutality and corruption, resulting in declining public trust and support for the police.

South Africa's policing problem is not the result of too little money. In the eight years to 2020, the SAPS budget swelled 65.5% from R58.5 billion to R96.8 billion. The budget for visible policing doubled, detectives got an 85% increase and crime intelligence 91%.

But the number of serving police dropped, mostly because of automatic promotions every four years for non-commissioned officers, regardless of their performance. In 2018 and 2019, more than 42 000 police were promoted, and R1.2 billion was added to the SAPS's annual salary bill. This resulted in a 6% decrease in the number of personnel SAPS could afford between 2012 and 2020. However, police performance dropped by a far more considerable margin.

So this is a police service not delivering bang for its buck. Police underperformance has been accompanied by an increase in crime. The number of murders went up by 37% between 2012 and 2020, with reported armed robberies climbing by 43%.

Fortunately the SAPS has a solid foundation in the many hard-working, honest people dedicated to serving their communities. Carefully crafted technical reforms could do much to improve police professionalism, performance and accountability.

The biggest obstacle is a political one. Will the ANC support an effective law enforcement agency that serves the country and all its people? Or will we continue down the well-worn path of deterioration and insecurity?

South Africa's turbulent and fragile democracy is likely to be tested again. It remains to be seen how police will perform next time. And that largely depends on the willingness of Ramaphosa and his government to act fast and make tough decisions in the interests of the country.