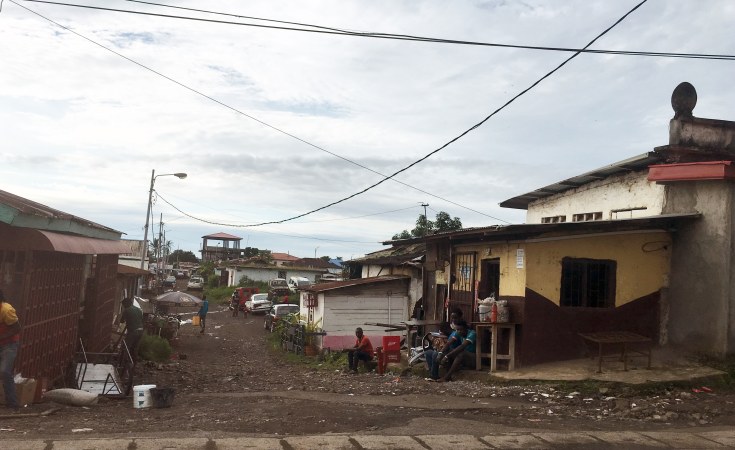 Human Rights Watch
Many residential neighborhoods, including this one in Malabo, receive little or no government investment despite the massive outlays in public infrastructure for government buildings and other prestige projects (file photo).
Human Rights Watch (Washington, DC)
press release

The decision ends over a decade of litigation and cements France's control over about €150 million (US$177 million) in stolen assets, which must be returned to Equatorial Guinea for the benefit of those deprived of the resources.

"Today is a huge victory in the fight to keep kleptocrats from robbing public resources to pay for lavish lifestyles abroad, denying Equatorial Guinea's people their basic social and economic rights," said Sarah Saadoun, senior business and human rights researcher at Human Rights Watch. "France now joins the United States and Switzerland in holding a combined $237 million in recovered assets that must be returned to benefit the Equatorial Guinean public."

The court's decision ends a corruption case initiated in 2008 against Nguema Obiang by two French anti-corruption organizations, Transparency International-France and Sherpa. At the time, Nguema Obiang was the agriculture and forestry minister, but he was appointed vice president in 2016 in a transparent effort to bolster his claim of diplomatic immunity.

The case, which followed a US Senate investigation into a US bank's role in facilitating corruption by the Equatorial Guinean president and his family, revealed that Nguema Obiang used his position to pilfer the country's accounts and launder the money in France. He purchased a 101-room mansion on the exclusive Avenue Foch in Paris, as well as a fleet of high-end cars, art, watches, designer clothes, and fine wines through a network of companies.

The court decision makes France the third country to recover assets from Nguema Obiang that are to be returned for the benefit of Equatoguineans. On July 20, France adopted a law requiring seized assets in corruption cases to be returned to the public from whom they were stolen.

In 2011, the US Department of Justice seized over $70 million worth of Nguema Obiang's assets and in 2017, Switzerland seized his $100 million-dollar super yacht and 25 cars. The US Justice Department settled the case in 2014 after Nguema Obiang agreed to forfeit $30 million, and Swiss prosecutors closed their investigation in 2019 after Nguema Obiang agreed to forfeit the cars, which raised $27 million at a subsequent auction. Under both agreements, the forfeited assets must be returned for the benefit of the people of Equatorial Guinea but neither government has yet done so. On July 23, the United Kingdom sanctioned Nguema Obiang with asset freezes and a travel ban on the basis of evidence uncovered in these cases.

The discovery of oil in Equatorial Guinea in the 1990s generated enormous wealth that could have transformed the lives of those living in the small central African country had it been used to meet the government's social and economic rights' obligations. Sadly, systemic corruption and self-dealing has largely squandered that potential. The president, who has been in power since 1979, making him the world's longest-serving head of state, maintains full control over the government and does not tolerate dissent. Few, if any, details of the country's budgets are published and public procurement is not transparent.

The recovered assets awaiting repatriation to Equatorial Guinea by the three countries could finally deliver to the broader public tangible benefits from oil wealth that until now have largely been enjoyed by a small group of political elite. However, because Nguema Obiang remains in a position of power, and corruption in the country remains endemic, there is a high risk that those assets will be misused once returned. Equatorial Guinean officials have attacked these corruption cases as a neo-colonialist attempt by foreign governments to loot the country's resource wealth, making it critically important to keep recovered assets independent from the government that seized them.

To ensure the credibility and integrity of the process, France, as well as the US and Switzerland, should carefully select projects for funding and disburse funds through a fully transparent, accountable, and independent mechanism. The system should adhere to principles for accountable asset return developed by several civil society organizations, including Human Rights Watch and EG Justice. These principles build on those agreed by the Global Forum for Asset Recovery, an intergovernmental initiative hosted by the World Bank.

"This case, along with those in the United States and Switzerland, have exposed how the president's son used his position of power to rob Equatoguineans of their rights but they have fallen short of holding him accountable," said Tutu Alicante, executive director of EG Justice. "Foreign governments need to right this wrong and sanction Teodorin for corruption."

Sanctions On President's Son - London Embassy to be Closed