Ghana: New Species of Frog Named to Hail Ghanaian Community Trying to Save Its Habitat 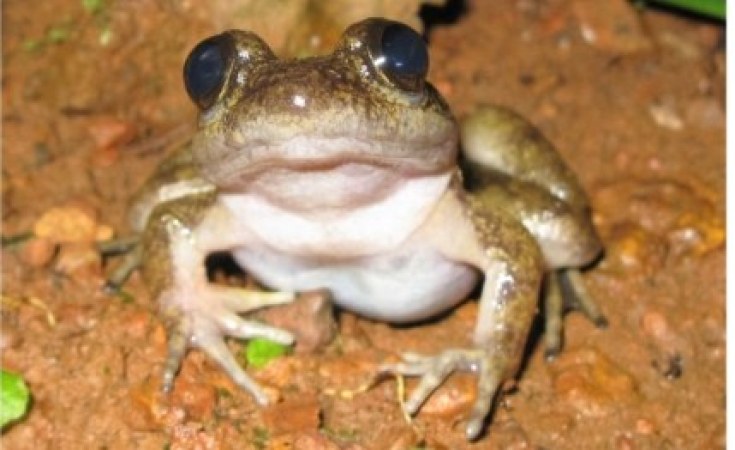 Scientists have named a unique species of forest frog that has teeth and uses its front feet to push food into its mouth after a Ghanaian community that has campaigned to save its forest home.

The sagyimase part of the name refers to the Sagyimase community that has campaigned to save its habitat - the Atewa forest, north of the capital Accra.

The frogs are found in just five streams in a small portion of the forest.

The government wants to mine the area for bauxite, a rock that contains minerals used to produce aluminium.

The Sagyimase community has helped to oppose mining in the forest since 2006.

"When you look at a map of the Atewa Hills and where this new frog is, it's just in the middle of where they want to mine for the bauxite. So it doesn't have a chance," said Ghanaian herpetologist Caleb Ofori-Boateng, one of the scientists who described the new species in a paper published in the journal Zootaxa.

"(Sagyimase) is a small town but I feel that this (honour) will really encourage them and they were really encouraged when I shared the news with them," Ofori-Boateng told RFI.

"It will help them to do more. It'll also help around 20 other communities around Atewa to stand up for conservation."

Not a normal frog

The Atewa Forest is a biodiversity hotspot that is home to unique plants and animals.

These include another frog discovered there by Ofori-Boateng in 2006, the Afia Birago puddle frog.

The new frog species is brown with protuberant eyes and a body small enough to fit into the palm of a human hand.

It spends 95 percent of its time in water, has a shrill whistle that penetrates the deepest forest and has small poorly-formed teeth, said Ofori-Boateng. Highly intelligent, it uses its front feet to push food into its mouth.

"When you compare this frog to other frogs it's like comparing a pig to a whale. It's very different. It's not a normal frog," he said.

"It's going to take time for us to understand and appreciate what it is and what its contribution will be to the planet."

Local and international campaigns to stop mining in the area do appear to be bearing fruit.

But Ofori-Boateng said there are indications the government is not giving up on its plans.

"Recently in the newspaper they were asking for contracts for the railways that are planned to transport the bauxite," he said.

He and his co-authors have recommended that the Atewa slippery frog be listed as critically-endangered by the International Union for Conservation of Nature.

A Rocha Ghana, a conservation group, said the description of this new frog species will strengthen campaigns to get the entire Atewa range - only part of which is a forest reserve - turned into a National Park to safeguard the biodiversity as well as water supplies.

Added Ofori-Boateng: "With these new discoveries comes huge public support for the Atewa Hills. If we can get one million or five million Ghanaians to be strongly against it, no government can dare ever think of mining it."