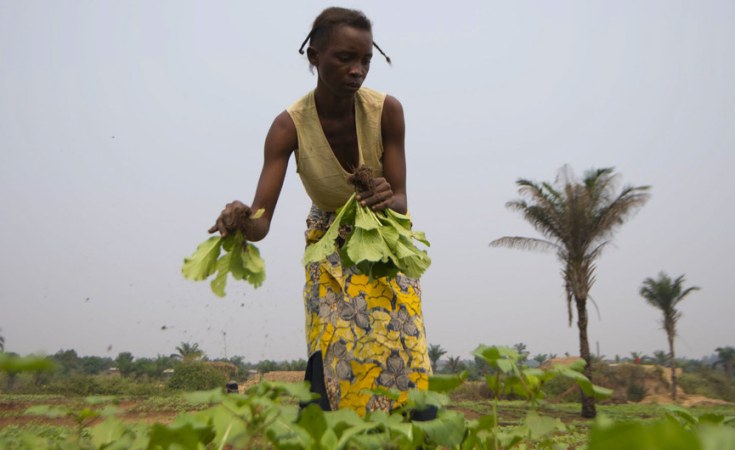 Junior D. Kannah/FAO
A farmer in the Democratic Republic of the Congo where one in three people suffer from acute hunger.
Voice of America (Washington, DC)
By Lisa Schlein

Geneva — The United Nations warns global hunger is increasing and urgent action is needed to stave off famine and death over coming months in nearly two dozen unstable, violence-prone countries.

A report by the U.N. Food and Agriculture Organization and the World Food Program said more than a half-million people are experiencing catastrophic levels of acute food insecurity and 41 million are at risk of famine.

The report from the WFP and FAO focuses on the particularly serious situation in 23 so-called hunger hot spots. Most of those countries are in sub-Saharan Africa, with others in Central America, Asia and the Middle East.

Patrick Jacqueson, FAO officer in charge of the Geneva office, said acute hunger is set to increase in those countries over the next four months without urgent, scaled-up humanitarian assistance.

"Conflict continues to be the primary driver for the largest share of people facing acute food insecurity," Jacqueson said. "Closely associated with conflict are humanitarian access constraints, which remain significant, compounding food insecurity. Weather extremes and climate variability are likely to affect several parts of the world during the outlook period."

The report said dry conditions are likely to affect Haiti, Nigeria's Middle Belt and the "Dry Corridor" in Guatemala, while above-average rainfall and flooding are forecast in South Sudan, central and eastern Sahel, and Gulf of Guinea countries.

Annalisa Conte, WFP Geneva Office director, said the aggravation of conflict in recent months is having a catastrophic impact on the food security of the Tigrayan population in Ethiopia. She warned that more than 400,000 people would face starvation if they did not receive sufficient humanitarian aid.

"If we move to Madagascar, Madagascar is experiencing the worst drought in 40 years," Conte said. "On top of that, economic decline largely caused by COVID. As a result, 1.3 million people are currently facing the acute food insecurity."

The FAO and WFP said fighting, blockades that cut off lifesaving aid to families on the verge of famine, and a lack of funding were hampering efforts to provide emergency food aid to millions of desperate people.

The agencies said families who rely on humanitarian aid to survive were hanging by a thread. They noted that most of those on the verge of famine in the 23 hot spots were farmers and must receive help to resume food production. That, they said, will allow them to feed themselves and become self-sufficient.