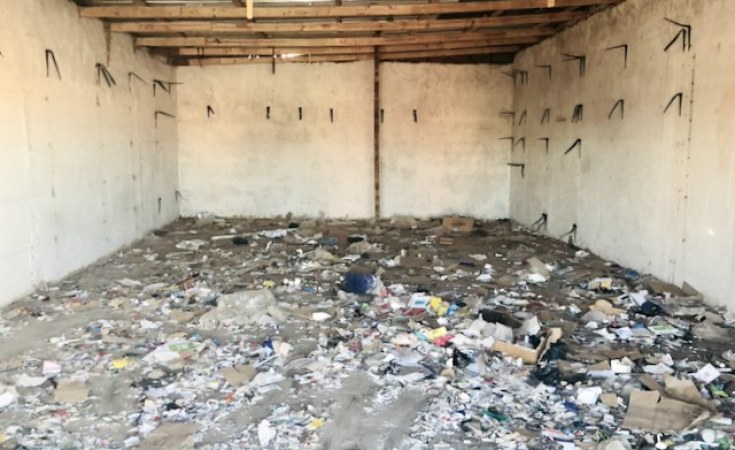 Kimberly Mutandiro / GroundUp
An immigrant spaza shop in Tsakane was stripped bare. In addition to the food stocks, everything was looted, including shelves, fittings and fridges
Deutsche Welle (Bonn)
By Thuso Khumalo

Two weeks after several South African provinces were hit by a wave of deadly violence, the process of rebuilding their destroyed infrastructure and reopening the scores of looted shops has yet to begin.

A deadly spree of violence and looting engulfed the South African provinces of Gauteng and KwaZulu-Natal (KZN) a couple of weeks ago, during which thousands of businesses were gutted and at least 330 people were killed.

The KZN government on Thursday declared a state of disaster to divert budgets towards recovery.

The Shoprite supermarket in Pennyville, Soweto recently reopened its doors following the unrest, during which shelves and tills were broken, amongst other damage.

Three kilometres away, the Diepkloof shopping mall had all 34 of its shops looted and vandalised -- some were even set on fire.

The marks of looting, vandalism and arson still remain. With the exception of two, all stores are still closed.

The shop belonging to 65-year-old Sam Mampane is one of only three that have started the painful process of reopening.

A wooden counter and two large, broken printing machines were the only things remaining in his once-successful courier, postal, printing and internet services shop.

"All our computers were gone. Chairs for clients are gone. Stock is gone. They smashed the till, took the money and went."

Although Mampane's business was insured, he said that he cannot afford to wait for the time-consuming payment processes of insurance companies.

"We are just hoping that the police are not going to get overwhelmed again. I'm stressed. I'm devastated. My family depends on what we are making here."

"I have to pay rent," Mampane added. "Phones have to be paid for. My boys are here. They have got families as well. If there is no money, what is going to happen?"

Exemplar Retail Limited owns about 20 shopping malls across South Africa. The company's CEO, Jason McCormick, admited that the rebuilding process will not be child's play.

"Somewhere close to €29 billion worth of damage," McCormick told DW. "We haven't finalised the details yet. The surveyors and engineers are still finalising their reports, but it's certainly not a couple of tens of millions. It's significant."

"There was no doubt that this was sustained. This was planned. There was an intention to cause maximum damage. They disabled our fire prevention systems in the malls. They attacked them so that we couldn't put out the fires," added McCormick.

Community buildings and clinics affected by the looting and vandalism are still struggling to reopen. The Kliptown Research clinic -- a key research institution for HIV and AIDS -- was also brought to its knees.

Anusha Nana, the clinic's project director, said that without external help, it could struggle to reopen.

All the consulting rooms' internal infrastructure was damaged," she said. "Medical equipment was stolen, and this included stethoscopes, blood pressure machines and weighing scales."

"Since the riots in mid-July, we have tried to repair damages to our clinic to allow us to become operational and see our participants," Nana added.

"And we have been able to do so through our available donor and grant funding. We however, need to review and improve our security as well as back up water and power supply to our clinic. We continue to have interruptions of electrical power due to cable theft, poor infrastructure and national rolling blackouts."

However, she said that giving up is not an option:

"It is important that we become functional as soon as possible, so that we continue to provide services to our community and to continue with our scientific, global and research agenda."

Companies and well-wishers have started reaching out to help the clinic reopen its doors.

Arjun Khoosal is the co-founder of Kandua, the largest marketplace for maintenance and renovation in South Africa.

"The PHRU -- which is the perinatal HIV Research Unit -- in Kliptown is a research clinic at the forefront of fighting the HIV pandemic [...] Even in the best of times critical institutions like these are hampered by lack of resources and support in our country. We owe it to these front-line workers to show our support, not just as Kandua but also as a conduit for the whole of South Africa," Khoosal told DW.

"And so, we take great pleasure at being able to support them at this difficult time. We are working on repairing a damaged wall that will secure the building from future risks as well as internal walls and electrical systems. With these repairs the clinic should be back in providing its vital services to the local community. So, businesses, individuals and everyone should be a part of this solution."

Gauteng's premier, David Makhura, said his province lost more than €200 million and over 14,500 jobs in one week of looting.

Over 30 shopping centres in the province were either looted or destroyed.

"There has been significant disruption of small business operations," Makhura said.

"Some of the businesses don't necessarily operate in those malls, but they themselves suffered severe disruptions. This includes spaza shops, and informal traders, most of whom operate in the streets. They were severely affected by the unrest."

Meanwhile, the South African government also announced a huge bailout to fix businesses, infrastructure and livelihoods dismantled by the looting.

The government has availed over a €2 billion financial aid package to assist businesses affected by the riots.

Mboweni added that the government would also help the South African Special Risks Insurance Association (SASRIA) in paying out the claims emanating from the riots.

"Of course, at the launch of our democracy, we did not really anticipate that we will have riots and destruction of property and so on because we're a democracy and therefore we were supposed to resolve our differences peacefully, in discussions and debate," Mboweni said.

"But unfortunately, we have found ourselves in this position today and therefore, Sasria is going to become very handy in assisting us to come out of this difficult situation."