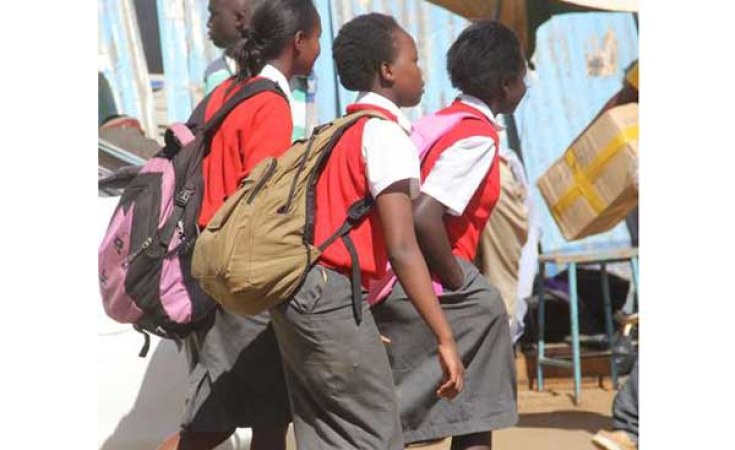 Thousands of Form One students trooped to schools yesterday after staying home for more than four months, even as their parents and guardians struggled to raise school fees.

Checks by the Nation established that there was a huge turnout countrywide on Day One, despite the economic challenges that have been worsened by the Covid-19 pandemic.

In Nairobi County, learners started arriving at schools accompanied by their parents early in the morning. However, those who went to Jamhuri High were told to return tomorrow.

Ministry of Education chief administrative secretary Sara Ruto put the reporting rate in the city at more than 90 per cent.

She said only learners who appear in the National Education Management Information System (Nemis) would be admitted, and asked those who requested transfers to check if they had been approved.

Those who are not in a position to take up their places in particular schools should inform the schools, she said. She was speaking at St George's Girls' Secondary School Nairobi while monitoring the admissions.

At Kagumo High in Nyeri County, more than 300 students had reported by midday. At the gate, they washed their hands and their temperatures were taken as per guidelines from the Ministry of Health.

The principal, Dr Silas Mwirigi, said necessary measures had been taken to prevent the spread of Covid-19.

"Everyone is supposed to be wearing a face mask and we have set up a number of registration points so that we can prevent congestion," he said.

"We expect all of them will have reported by the end of the day."

At South Tetu Girls High, the admission was carried out in a field to create more space and allow for social distancing.

In Murang'a County, principals complained of being allocated more learners than their capacity.

The public transport sector took advantage of the demand for services to inflate fares by between 100 and 200 per cent.

"This is a challenging moment to be a parent with a child reporting to Form One. After going through hell to raise fees and buying personal effects, we are faced with public transport operators who have conspired to drain us," said Ms Judith Wagaki, who paid Sh500 fare from Kenol to Murang'a town, up from Sh100.

In Mombasa County, Melisa Ngala did not report to school after failing to raise the Sh58,000 fees needed to join Ribe Girls' High.

"All my friends have gone to school, it's a sad that my parents cannot afford my fees. I do not know what to do," said the 16-year-old girl, who is considering working as a house-help to save for her education.

A spot-check by the Nation revealed that some schools across Nyanza were charging exorbitantly for uniforms and stationery, which must be bought from the institutions.

"It's frustrating that some schools charge double the price for uniforms and reams of photocopy paper, yet we are not allowed to purchase them from outside," lamented a parent who had taken her daughter to St Albert's Ulanda Girls in Awendo sub-county.

"We had a new dormitory constructed alongside four other classrooms," he said, noting that a number of learners reported without the full fees and other items, but they were admitted.

At Lions High, 510 Form One students are expected, according to the principal, Eudia Oyier.

She, however, expressed concern about accommodation, considering the large number.

"Last year we had 380 students who were admitted in eight streams. This year, we need three more classrooms, which are not available now," she said.

The situation was no different at Chavakali Boys, where students were taken through different stages of admission. Chief principal John Kuira said they expected 470 Form Ones by Friday.

Well-wishers in Homa Bay County stepped in at the last minute to help Luice Otieno, who had walked several kilometres from home in Kanyabala location to sell rabbits and get money for school uniform and other personal items to join Form One at Ruga Secondary School. Good Samaritans quickly raised the cash for him.

Previous Story
Thousands of Form Ones Missing a Week After Admission Deadline
Next Story
How Principals Sell Form 1 Places for Up to Sh250,000

Thousands of Form Ones Missing a Week After Admission Deadline