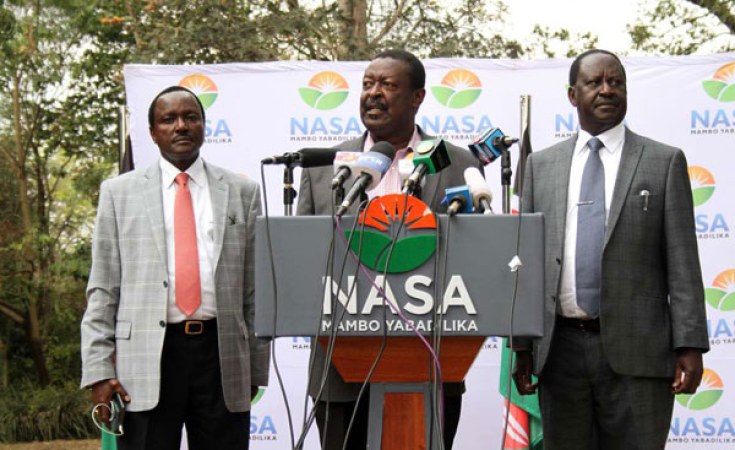 The Orange Democratic Movement (ODM) may not remain 'single' for long after the Democratic Party of Kenya (DP) offered a political partnership deal ahead of the 2022 General Election.

It also ruled out working with the United Democratic Alliance (UDA), an outfit associated with Ruto.

David Munene, DP's Director of Elections, confirmed ODM is their party of choice to form a coalition with as they share similar political and socio-economic ideologies.

Munene pointed out his party boasts a long-standing relationship with Odinga since the days of the National Rainbow Alliance (NARC) and recently in the Kibra by-elections where it withdrew its candidate in favour of current MP Imran Okoth.

"We are open to coalitions as we want a government that is all-inclusive. We don't believe in corruption but reviving the economy, getting back what has been stolen by working with a party that will fight corruption with all its might," said Mr Munene.

"ODM is our party number one to work to work with as we share a lot in common and we know they like fighting corruption," he added.

He explained that fighting corruption, youth empowerment, and revival of the economy are top in the priority list of the party and as it stands, it is only ODM which espouses a similar blueprint.

Mr Munene laid into the economic approach perpetuated by DP Ruto and his allies, saying what the country needs is real empowerment and not politics of handouts and wheelbarrows.

"There are other people who are talking about bottom-up but if you ask them to explain the it, they cannot. Empowering people is not giving them handouts or wheelbarrows but showing them how to do things," he said.

At the same time, the director said the party has kicked off an aggressive recruitment process across the country, following a consultative meeting on Friday at its headquarters in Nairobi, as it seeks to revive its fortunes and play a major part in the upcoming polls.

He said they also intend to field candidates across the country in all the political seats starting from the presidential, gubernatorial, senatorial, MP, and MCA.

"We want prospective candidates for various political seats to join as we will soon begin the process of preparing our candidates for the 2022 General Election. We are calling on Kenyans to register online through the website or physically at the party's offices," said Mr Munene.

He said that they want the youth come forward and own the party which is one of the oldest parties in the country having been founded in 1991.

"We want to walk the talk and mine is to link the old and the young as we want them to push their agenda through the party," he added.

ODM Resolves to Exit Nasa Coalition Ahead of 2022 Polls