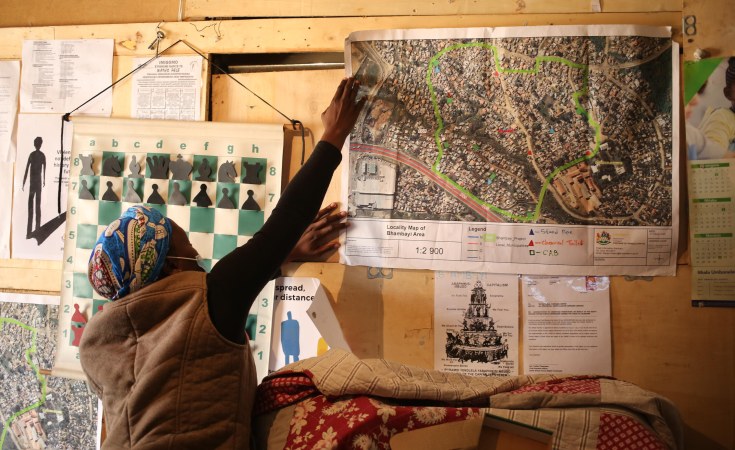 Mlungisi Mbele/GroundUp
Blessing Nyoni pins a map to the wall that shows the informal settlement of Bhambayi near Phoenix. About 70 families live in this area.
Government of South Africa (Pretoria)
press release

Members of the Media;

As the country picks up the pieces from the violent, criminal and brutal events of the failed insurrection.

The South African Police Service is hard at work in dissecting the causes and effects of the wanton destruction of infrastructure, warehouses and the looting of business premises.

Most importantly, we are bringing to book those who instigated the events that resulted in the death of 342 people in KZN and Gauteng.

Members of the media,

Allow me to zone in on the events that took place in this province, more particularly in Phoenix, which lies just over 10km away from here.

During the unrest, Phoenix and surroundings became the epicentre of heinous criminal and racist incidents that resulted in brutal killings and injuries; horrendous damage to property; and untold pain and trauma.

Members of the Media,

We want to share what we have done to ensure the atrocities that played out in Phoenix are not be repeated. These acts have no place in our society no matter what the circumstance.

We want to assure the nation that the crimes committed in Phoenix or anywhere else in the country, will not go unpunished.

We also trust that today we can set the record straight by laying bare the facts - the TRUTH.

On the 12th of July 2021, the community members in Phoenix set up blockades and patrolled the neighbourhood streets after the start of mass looting and unrest in Durban.

Some people in that community set up armed checkpoints at strategic access points to the area.

However, the situation rapidly deteriorated and soon the streets of Phoenix became scenes of crime.

The problem started when some people operating the checkpoints turned to vigilantism and started racially profiling people, preventing them entry into the suburb.

This amounted to unlawful discrimination and a restriction of movement for mainly African people.

According to police reports, a vehicle (bakkie) with no registration plates, carrying looted items was stopped and searched at one of the checkpoints.

Four male occupants of the bakkie fired shots at community members and the community returned fire. The four suspects fled into the bushes.

The shoot-out resulted in four African males sustaining gunshot wounds, one of them died on the scene.

Their vehicle was set alight.

This incident, we believe sparked other incidents of stoning and burning of vehicles and further violence including shootings, stabbings and assaults.

It is alleged that at these road closures in Phoenix, some motorists were robbed and cars were ransacked.

Irrespective of gender or age, some motorists were allegedly forcefully taken out of their motor vehicles and then assaulted with baseball bats, bricks and sticks. Some people were even butchered with bush knives and other sharp instruments.

It is alleged that some people were shot and killed, and their vehicles were set alight.

Aside from the detailed police reports that I have seen, I have heard personal accounts of residents from neighbouring Bhambhayi, Zwelitsha and uMaoti.

They have told me how they narrowly escaped death while trying to enter Phoenix to access clinics and local pharmacy.

I have also met with Phoenix community members who have condemned these savage acts and many are coming forward with information that is assisting police investigations.

The events in Phoenix, which I have outlined, have claimed the lives of 36 people.

Our investigations show that 30 of those who were killed, were shot.

Two were burnt to death.

One was stabbed and another was run over by a motor vehicle.

Two others died from the brutal injuries they sustained after being assaulted.

In total, police are investigating 52 cases of attempted murder and probing nine cases of common assault and 16 cases of Assault GBH.

Members of the Media, Police investigations continue and these figures will be updated.

I want to be very clear about this: what happened in Phoenix were criminal acts of the worst kind which also took a racial turn.

These acts have no place in our society and the perpetrators will be arrested and prosecuted.

A team of (31) experienced detectives from the province and national, have been deployed to investigate, make arrests and attend court cases to ensure justice prevails.

They have hit the ground running, ladies and gentlemen.

Working closely with the communities, their investigations have led to the arrest of 22 suspects so far.

Some of these suspects are allegedly connected to several murder cases, while others face charges relating to attempted murder, malicious damage to property, and defeating the ends of justice.

All suspects are currently going through the court processes with some appearing in court for the first time this morning.

Detectives are investigating the role of private security firms in the violence.

The response of the local SAPS to these events will also be looked into.

Working closely with the Private Security Industry Regulatory Authority (PSIRA), the team of investigators has seized (152) firearms, from four private security companies working in the area.

112 illegal firearms have also been seized during police operations in Phoenix.

The seizure of these firearms is within the ambit of Firearms Controls Act and the firearms have been sent for ballistic analysis.

Members of the Media,

Calm has returned to the province of KZN and Government's Security Cluster has marshalled all its resources to restore stability.

We have achieved this through collaborative efforts of multifaceted forces.

This includes the SANDF giving support to the SAPS and its specialized units such as Public Order Police, Tactical Response Teams (TRT) and Metro Police deployed daily to the areas of Phoenix, Bhambayi, Zwelitsha and uMaoti.

However, despite that calm, we remain on high alert.

While much ground has been covered on the security front in Phoenix,

The crucial work to rebuild trust between communities is underway.

The Premier of the province will expand further on this.

Nevertheless, I do want to take the opportunity to extend my appreciation to the work of the Peace Committee that was set up in the wake of these crimes.

It is these determined and committed women and men who raised their hands to be part of the solution, in the face of adversity.

They stand together against the divisions sowed among the people of this area.

This forum has worked with the SAPS in facilitating the reporting of cases of missing persons.

They have been at the forefront of assisting the bereaved families to identify the remains of their loved ones at the Phoenix government mortuary.

This Peace Committee is playing a vital role in ensuring that the communities they represent are kept abreast with information at all times.

This Peace Committee saw the light at a time when there was only darkness, despair and hopelessness.

Together, they put aside their differences and worked towards the same goal. They have shown us the way forward.

The public perception of the crimes that took place in Phoenix has unfortunately been worsened by misinformation.

President Cyril Ramaphosa has also rung the alarm on the dire impact fake news has on truth of the events in Phoenix,

He said, and I quote:

"The proliferation of fake news, doctored images and incorrect information have made it difficult to separate fact from fiction."

I trust that this briefing assists in correcting the misinformation and clears the muddied waters with facts to combat the lies peddled by people wishing to hide behind keyboards and online anonymity.

Over and above that, this briefing is meant to illustrate the work done by law enforcement to ensure that the;

Msomi; Sibisi; Thusi and Mkhize families find closure in knowing the truth about what happened to their loved ones.

I want to assure these families that the police will continue their relentless pursuit of the killers and their accomplices.

We are committed to upholding the law and seeking justice.

Previous Story
Is the 'Phoenix Massacre' Narrative a Deliberate Attempt to Drive a Wedge Between Africans and Indians?
Next Story
Work to Restore Stability in KZN Continues

Is the 'Phoenix Massacre' Narrative a Deliberate Attempt to Drive a Wedge Between Africans and Indians?